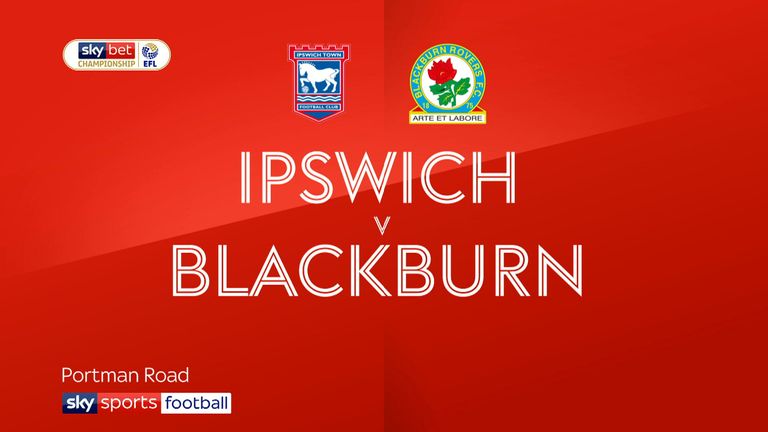 Summer signing from Peterborough Gwion Edwards gave Town a fine start when his excellent looping header beat David Raya in the Blackburn goal in the fifth minute. But Rovers responded and first-half goals from Danny Graham and Bradley Dack put them in control.

Town left it late to find an equaliser when season-loan signing Tayo Edun's cross from the right went past everyone to secure a point in stoppage-time.

Ipswich got off to the perfect start in the fifth minute when Edwards met Freddie Sears' pin-point cross from the left to head home at the far post.

Blackburn equalised in the 20th minute when Darragh Lenihan headed a free-kick back into the danger area and, after Town keeper Bartosz Bialkowski saved Derrick Williams' flick-on, Graham netted the loose ball.

Rovers went ahead nine minutes later after Williams found space down the left and his low cross from the byline was fired home at close range by Dack.

Ipswich's Cole Skuse could not direct his header on target following another good Sears cross from the left before Edwards fired over for the Blues just before half-time.

Blackburn appeals for a spot-kick were turned down early in the second half when Dack went down under challenge from Ipswich's Denmark international Jonas Knudsen.

Edun was brought on for Flynn Downes on the hour-mark before Rovers replaced Dominic Samuel with debutant Kasey Palmer two minutes later.

Ellis Harrison's good low cross from the right failed to find an Ipswich player as the home side attempted to exert some authority on the match. After Dack's cross was half-blocked, Rovers midfielder Corry Evans screwed his shot wide when well-placed.

Ipswich skipper Luke Chambers was booked for a lunging challenge on Eliott Bennett in the 73rd minute and Blackburn captain Charlie Mulgrew curled the resultant free-kick over the bar.

Rovers should have extended their lead in the 78th minute when substitute Palmer scuffed his shot after Ryan Nyambe's cross found its way to him.

Ipswich brought on teenager Ben Morris for Sears in the 79th minute and the 19-year-old made an immediate impact - turning Evans in the box before seeing his low strike saved by David Raya.

Substitute Edun - signed on loan from Fulham this week - rescued a share of the spoils for Town in stoppage-time when his whipped cross from the right evaded everyone to beat Raya.

Paul Hurst: "Lots of emotions. In the end, pleased to get something out of the game. Obviously the later it goes, you're questioning whether that's going to be the case.

"Very proud - as I said I would be - of the team at the first game at this level for myself and delighted with the start that we made."

Tony Mowbray: "The dressing room's very disappointed and frustrated, they're all discussing what we might have done to prevent that at the end. If Kasey [Palmer] had scored the goal where he should have, he scuffed it a little bit, 3-1 and I'm sure it would have been done but this is the Championship. It's the league it is, no team gives in, everyone keeps going.

"So massive disappointment for us and yet would we have taken it away home from home on a scorching hot day at Portman Road, new manager, crowd up for the game? Probably, and yet we are disappointed."