Goals from Kemar Roofe and Jack Harrison earned Leeds a 2-0 win over Derby and extended their lead at the top of the Championship to five points on Friday evening.

The hosts were dubiously denied a penalty inside the first minute after Ezgjan Alioski was brought down by Andre Wisdom, but they took a deserved lead when Roofe turned home 18-year-old Jack Clarke's low cross (20).

Derby's threat began to grow towards the end of the first half, but any momentum was killed off after the restart when Harrison finished from close range (47).

Man of the match: Jack Clarke

Marcelo Bielsa's side halted a run of three straight defeats in all competitions with the win, while the Rams occupy the final play-off spot and will remain there irrespective of Saturday's results.

If the 'spying' claims hadn't caused enough controversy for one week, Leeds were contentiously denied a penalty when Alioski - deployed at left-back - was brought down by Wisdom after just 32 seconds.

Referee Andy Davis pointed to the spot, but retracted his initial decision after a conversation with his linesman, who had raised his flag for offside as Alioski intercepted the ball. Replays suggested it was an incorrect decision.

From then on, to say the hosts were dominant would be an understatement and they earned their just rewards after 20 minutes when Clarke - making his first Championship start - burst beyond Ian Bryson and crossed for Roofe to open the scoring after Scott Carson's weak punch.

It was Frank Lampard's men who finished the first half in the ascendancy, but Tom Lawrence's tame effort just after the half hour was the best they could muster and it was surprising that Leeds had not made their dominance count by this point.

Among six changes, Leeds boss Marcelo Bielsa restored Liam Cooper and Pontus Jansson to the starting lineup, with Pablo Hernandez also joining them, despite indications earlier this week that he'd be absent from the squad. Jack Clarke, 18, was also handed the first EFL start of his career.

Scott Carson returned in goal for Derby, along with Andre Wisdom and Mason Mount, after Derby's 2-2 draw with Southampton, but Harry Wilson was omitted from the squad altogether after suffering a hip injury.

Just seconds after the break, however, Leeds doubled their lead when Harrison tapped Alioski's pull-back over the line, though full credit went to Clarke once more for his looping cross to the far post.

And Clarke went close to adding another assist on his man-of-the-match performance, but his low cross just evaded the touch of Roofe in the centre of the six-yard box as full-time dawned.

Man of the match - Jack Clarke

Usually a second-half sub when a game needs an injection of energy, 18-year-old Clarke showed on his full Championship debut that if you are good enough, you are old enough.

His performance will have certainly done his chances of further starts absolutely no harm at all, as he claimed the assist for Kemar Roofe's opener, played a key role in the second and went close to setting up a third late on.

🍾 Man of the Match is Leeds ⁦@JackClarke09 🍾

Marcelo Bielsa: "If we take into account the quality of the opponent and the fact that we lost the last two Championship games, it's a very significant win. We had to defend very well and this made it easier. 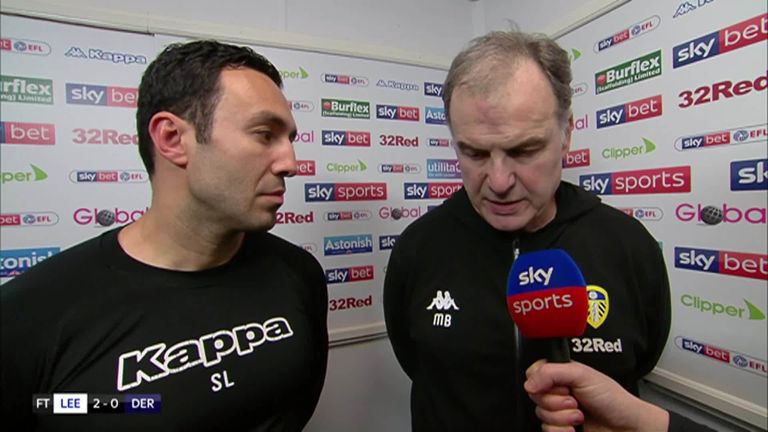 Marcelo Bielsa says Leeds' 2-0 win against Derby is a very significant win against a side of such quality.

Frank Lampard: "The best team one without a doubt. They were better than us from the first minute to the last. Defintiely below the standards we set in terms of energy but mainly on the ball we didn't have the courage to play against the team that work hard to stop you playing. But you have to keep playing and that's why I can't accept.

"Whether it [the 'spying'] is a league issue or an FA issue [I don't know] they have to deal with it, but it's up to them. I feel wrong to talk about it in this moment because it would seem like I'm making an excuse; the performance deserves no excuses." 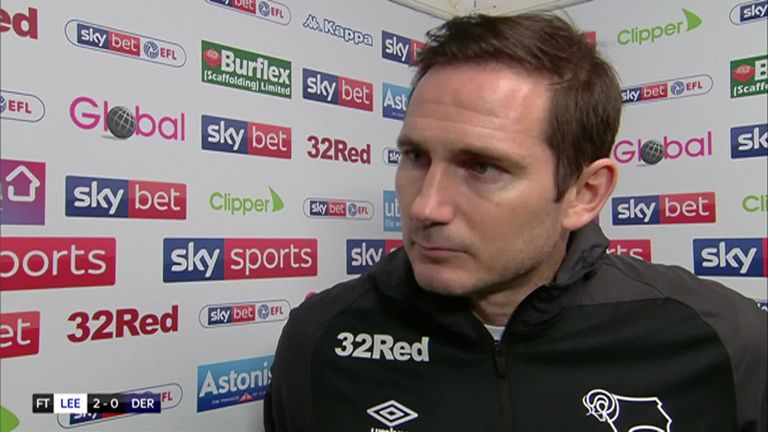 Frank Lampard says the better team won following Derby’s 2-0 defeat at Leeds, admitting his side didn’t play to the standards they have set.