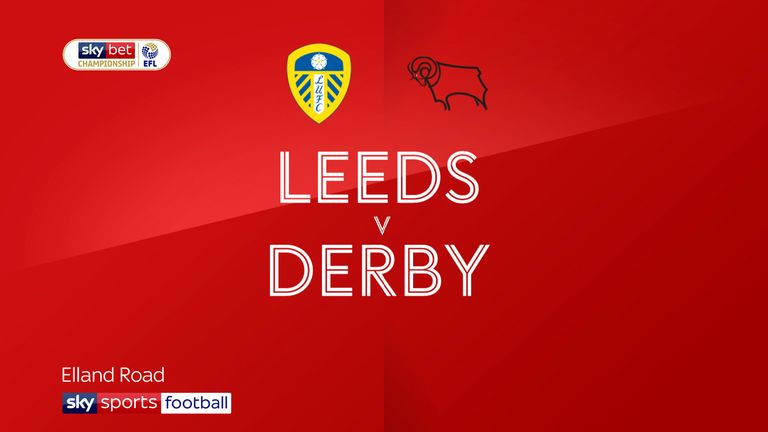 Highlights of the Sky Bet Championship match between Leeds and Derby.

Chris Martin's stoppage-time equaliser gave Derby a scarcely believable point in a 1-1 draw against a dominant Leeds side at Elland Road.

The Whites could have taken an unassailable lead into half-time but for some wasteful finishing, and only a Max Lowe own-goal (20) separated the sides with Derby 'keeper Kelle Roos parrying a Stuary Dallas effort only to see the ball to bounce off his left-back and roll helplessly into the net.

Derby were again lucky to restrict Marcelo Bielsa's to a one-goal lead as Patrick Bamford hit the post and Mateusz Klich missed a penalty in another poor 45 minutes in which the Whites should have killed the game off.

But substitute Martin grabbed the unlikeliest of equalisers in stoppage-time after firing in from inside the box in Derby's first real attack on goal, giving the Rams a share of the points and leaving Leeds to despair.

Bielsa named an unchanged Leeds side from the one that beat Barnsley a week ago, while Cocu's Derby made one change with Jozefoon coming in for Lawrence

The hosts pressed Derby into a number of first-half mistakes and the Rams were lucky to get away with some haphazard defending, with 'keeper Roos coming to the rescue to deny Hernandez from six yards.

But just a minute later Leeds found an opener when Bamford squared for Dallas, whose powerful shot was well blocked by Roos, but for Lowe to run into the loose ball and send it into back into the net.

Roos was again the Rams first-half saviour as he denied a swerving Harrison effort from long-range, before again saving from Patrick Bamford who should have done better when one-on-one with the goalkeeper.

And the Whites carried on the second half where they left off, with Bamford striking the post just minutes after the whistle as Derby struggled to keep pace with the opponent's high press.

Bamford then won his side a penalty that looked for all the world like putting the game to bed, only for Klich to drag his effort wide and somehow keep Derby in the game heading into the closing stages.

And the table-toppers were made to pay as Martin latched on to a fine ball across the face of goal from Paterson, rifling home and leaving his opponents stunned.

Hernandez was an absolute menace for Leeds down the right-hand side and can consider himself desperately unlucky not to take home all three points. Another great performance from the veteran.

Marcelo Bielsa: "This has happened a lot of times to us, but today was the wors. They shot once all match. We created maybe 10 or 12 chances. We played 60 minutes very good, maybe the best since I've coached the team. But the last 15 minutes was flat.

"We couldn't control the end of the match. When we lose a point in this way it's difficult to admit reasons why. But we started to play long rather than line to line."

Phillip Cocu: "When we concede a goal we have to make sure that we stay in the game. We stick to our plan. If we concede a goal, then we kill the game for five or 10 minutes. We did that, stayed in the game and scored an excellent goal. You have to give credit to Leeds because they are a big team with lots of quality and they put in lots of effort to get the ball back.

"I thought after 35 minutes we got back in the game, without creating any real chance. We kept the ball better so Leeds had to go back more. We kept believing that we could score and when we did score you saw what it meant to the fans. We have to use this boost going into our next game."