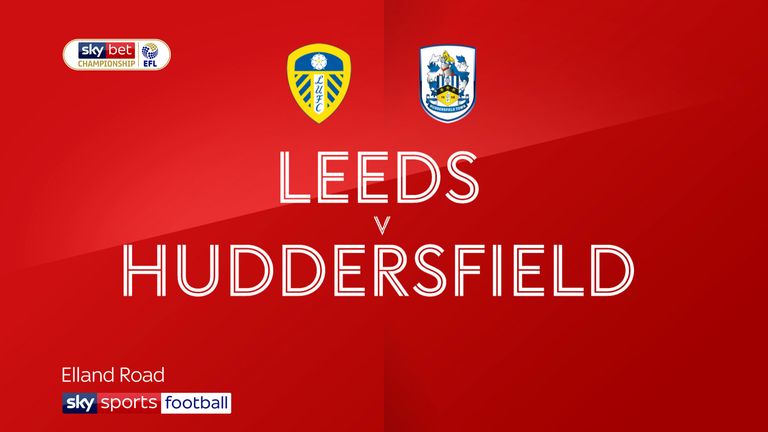 Highlights of the Sky Bet Championship match between Leeds and Huddersfield

Leeds returned to the top of the Sky Bet Championship with a 2-0 victory over Yorkshire rivals Huddersfield.

Right-back Luke Ayling sent United on their way at Elland Road with a sumptuous volley after just 160 seconds before Patrick Bamford tapped home his 13th goal of the season six minutes after the restart.

Head coach Marcelo Bielsa could not have wished for a more perfect start from his side, with Ayling volleying home off the underside of the crossbar from 10 yards from the outstanding Jack Harrison's cross.

It was in-form Ayling's sixth goal for the club, with the first three of those spread over 139 appearances, and with the last three coming in his previous five games.

Leeds, though, failed to build on such a solid platform, instead being forced deep on occasion by a Huddersfield side buoyed by last weekend's 4-0 home victory over Charlton.

The Terriers, though, managed just one effort on target in the opening half, with Trevoh Chalobah firing a 12-yard drive against the legs of Illan Meslier after playing a one-two with Fraizer Campbell.

Leeds at least finished the half in the ascendancy, twice coming close to doubling their lead.

Harrison first rifled an angled first-time shot inches wide of the left-hand post in meeting an Ayling cross before a Ben White header to a Harrison free-kick from deep on the left shaved the same piece of woodwork.

It provided the platform for a rampant Leeds assault at the start of the second half, with Jonas Lossl denying Harrison and Bamford in the opening three minutes of the second period, but with the Terriers goalkeeper unable to do anything about United's second goal in the 51st minute.

From captain Christopher Schindler's lunging challenge on Bamford that resulted in the fifth booking of six of what was far from a dirty game, Lossl brilliantly tipped away White's goal-bound header, only for Bamford to end a seven-match drought by poaching the rebound from two yards.

It was almost 3-0 in the 58th minute, with Harrison producing a stunning mazy run that culminated in a left-foot curler that had Lossl beaten, only to strike his right-hand post.

In front of United's biggest home crowd of the season - 36,514 - Bielsa's side comfortably saw out the closing exchanges to clinch another vital win in their quest to return to the Premier League and leave Town three points above the relegation zone.

Leeds' Marcelo Bielsa: "Maybe the competition will finish with the last match, maybe before. We have 27 points left to play for, and we don't know how many we are going to need, but we have nine matches to get them.

"Of course, there will be anxiety until we get what we are looking for, but this is the same for every team in the league. The most important now is what happens when the competition gets to the finish. A few months ago we had 11 points difference (to the play-off places) and we lost it. What we have to do is wait until the end to see what happens."

Huddersfield's Danny Cowley: "We had to hang onto Leeds in the second half. We saw the best team in the league playing at the top of their game today. They were relentless at times.

"I've had 13 years as a manager, and that was right up there in terms of an opponent's performance. I thought they were outstanding. That was a blueprint in terms of their physical quality and intent. They have so much purpose."