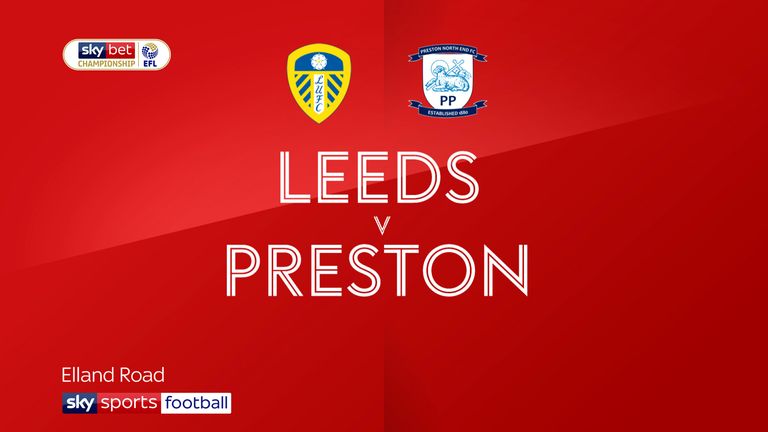 Highlights of the Sky Bet Championship match between Leeds and Preston

Stuart Dallas struck a dramatic equaliser two minutes from time as Leeds took a point from a hard-fought 1-1 draw with Preston.

Alan Browne slid North End ahead after a slick counter-attack in the first half (22), but the hosts had a number of chances to draw level, notably when Ezgjan Alioski hit the post after the break.

Marcelo Bielsa's side looked to have lost ground on leaders West Brom, who drew 1-1 with Barnsley earlier in the day, but Dallas' deflected effort (88) ensured the hosts earned a share of the spoils.

The result means the gap between the top two remains at three points, while Preston, who would have gone third with a win, stay in the final play-off place after their sixth draw of the season.

How Leeds avoided a slip in Championship title race

After an encouraging start, Preston capitalised on their early tenacity when Browne finished off a fine breakaway goal. Ben Pearson's defence-splitting ball found Tom Barkhuizen, who poked the ball to the Irishman, to coolly slide past Kiko Casilla.

In spite of his intense closing down in the opening stages, the isolated Patrick Bamford saw little in the way of goalmouth action and Leeds' best chances fell to Alioski, who dragged a shot across goal, then saw a header clear the crossbar six minutes before the break.

Bielsa introduced Eddie Nketiah in Bamford's place just past the hour and, within moments, he displayed his poaching prowess when he forced Declan Rudd to keep out a header with a strong right hand.

Ezgjan Alioski replaced the injured Pablo Hernandez for Leeds, while Ben Davies, David Nugent and Brad Potts started for Preston, in place of Billy Bodin, Paul Gallagher and Patrick Bauer, the latter of whom was suffering with illness.

Alex Neil's visitors were by no means out of the game, yet their attacking intent seemed to wane as the game progressed and they were given a wake-up call when Alioski struck the base of the post with a sweet volley after Pearson's header had dropped kindly.

Rudd made another good save to keep out an Alioski effort at his near post, but Preston were left deflated within 60 seconds when Dallas struck a first-time effort from the edge of the area that took a deflection on its way to nestling in the back of the net.

Man of the match - Liam Cooper

In spite of Alioski's endeavours at the top of the pitch, it was one of his defensive partners who starred at Elland Road. Cooper was a rock at the back, taking time to pick the right passes, lead by example and ensure that, once Preston had scored, they would not do so again.

Leeds' Marcelo Bielsa: "I was not happy with the first 20 minutes, it was not a good spell for us, we did not cope with their pressing and did not get into our game. I felt we took control after their goal.

"I admire Preston for how they got at us in the first quarter of the game. They worked very hard to put us under pressure and close us down. We struggled to move the ball today. I think we pressed the self-destruct button a few times which gave Preston their chances.

"Eddie Nketiah looked rapid and keen when he came on. There is still no news from Arsenal as to what they want to do with him at this stage. We want him to stay."

Preston's Alex Neil: "It took a deflected effort for them to get something from the game. Naturally we are disappointed not to win but I am proud of my players. They are one of the top sides in this division and we more than matched them.

"I can't ask for any more from the players. They played really well and I felt we did enough to win the game. We have two home games coming up and we have a good home record, so we are looking forward to those. We are in a good position in the league, but there is a lot of work ahead still."

Leeds travel to St Andrew's to face Birmingham on Sunday, in a game live on Sky Sports Football Red Button, while Preston host Reading at Deepdale the same afternoon. Both games get under way at 3pm.