Report and free match highlights from the Premier League clash between Liverpool and Brentford at Anfield, as Jurgen Klopp's side return their gap to Manchester City to 11 points with a game in hand and leapfrog Chelsea in the table 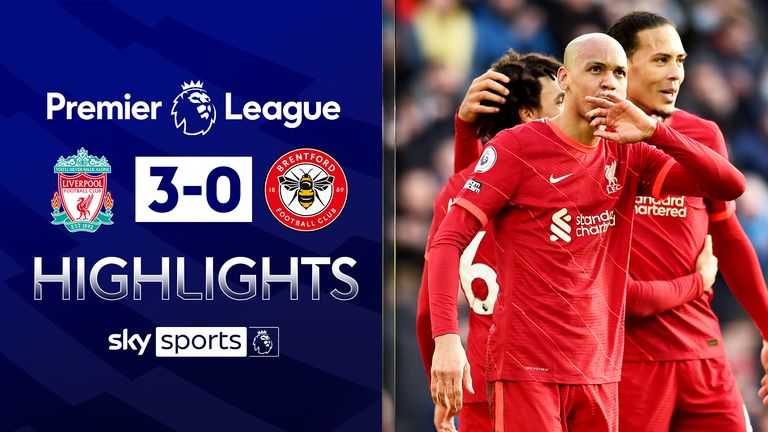 FREE TO WATCH: Highlights from Liverpool's win over Brentford in the Premier League

Liverpool moved up to second place in the Premier League table with a routine 3-0 win over Brentford at Anfield on Sunday, thanks to goals from Fabinho, Alex Oxlade-Chamberlain and Takumi Minamino.

Manchester City's win over now third-placed Chelsea on Saturday underlined the defending champions' dominance in the title race but Liverpool ensured they finished the weekend how they started it, 11 points behind City with a game in hand and a trip to the Etihad still to come.

Their faint hopes of catching Pep Guardiola's side continue thanks to a first win in four games in the Premier League, with Fabinho's back-post header from a corner a minute before half-time, Oxlade-Chamberlain's diving effort in front of The Kop on 69 minutes and a gift for birthday boy Minamino (77) sealing the points.

Bryan Mbeumo had almost bent in an equaliser for Brentford on 58 minutes but was just falling away as he hit his shot after turning Joel Matip and, after Diogo Jota had hit the post and been denied by a super save from Alvaro Fernandez, Liverpool finally finished off the contest.

"I knew before that the game Brentford would be a tough one," said Jurgen Klopp afterwards. "It was a tough one and that's why I'm so happy we did well. We have to find ways to break opponents down and today we did that particularly well and I'm really happy about that."

Fabinho's opener was nothing less than the home side deserved after putting Brentford under sustained pressure for most of the first half and forcing Fernandez into a brilliant stop from Virgil van Dijk after Jota and Trent Alexander-Arnold sent efforts over the bar early on.

The visitors appeared to have weathered the storm well and, with the help of some loose passes from Alexander-Arnold and Matip, caused some problems of their own as the half wore on, with Vitaly Janelt and Ivan Toney shooting off target.

Man of the match: Fabino (Liverpool)

But Brentford's first league game away at Liverpool since 1946 was destined to end in defeat when Oxlade-Chamberlain met Andy Robertson's superb cross.

Frustratingly for the midfielder, he was forced off with an injury soon after but a poor pass out from Fernandez allowed Roberto Firmino to pounce and tee up Minamino - 27 today - for a simple third meaning that, despite the absences of key men Sadio Mane and Mohamed Salah, Liverpool just about keep City in sight.

As for Brentford, who finally recorded a shot on target in second-half stoppage time, this was their fourth defeat in five league games - and could have been heavier had Minamino finished a late chance - but they remain 10 points clear of the relegation zone, sitting in 14th place.

No Salah, no Mane, no problem: Klopp pleased with attacking play in 350th game in charge

Jurgen Klopp had repeatedly been asked about the absence of Mohamed Salah and Sadio Mane, away at the Africa Cup of Nations along with Naby Keita, in the wake of Liverpool's failure to break down the 10 men of Arsenal in Thursday's Carabao Cup semi-final first leg. He was more comfortable discussing the issue after seeing his side put three past Brentford without two of their star attackers.

"[The 3-0 win] is really helpful, to calm these discussions down," he said. "I understand the question and thoughts behind it but for us it makes no sense because they're not here - like others with injuries - and we don't want to talk constantly about the boys who aren't in.

"We have to find ways to break opponents down. Today we did that particularly well and I'm really happy about that."

Liverpool among the goals again

Liverpool are the top scorers in this season’s Premier League, netting 55 goals – the most they have ever scored in their first 21 league matches from the start of a top-flight campaign.

Klopp also described himself as "happy" to have reached the milestone of 350 games in charge of Liverpool.

In that time he has won the Premier League and the Champions League - but he insisted he still has plenty more to achieve at Anfield.

"When I look back at the pictures [of when I joined in October, 2015] I look completely different so obviously it was quite an intense time since then! You invest a lot here," he laughed.

"But each little thing you do is really worth it because of the size of this club and how emotional the club is and how big the club is and how close we are to each other. It becomes family. You don't get an opportunity very often [to stay at a club a long time as a manager], I'm lucky I've had that happen a couple of times.

"I'm really happy about the story we're writing but in my opinion we're far away from finishing the book so we have to keep writing."

On the title race, he added: "We don't have to convince anybody outside. If they want to believe, they can believe. I think people are with us; they want to enjoy the ride and go for it as much as we can. We will try otherwise we have nothing to do."

Brentford boss Thomas Frank was pleased with his side's performance at Liverpool and says the display gives them encouragement for the second half of their campaign.

"It was in corners they were dangerous from and we had these opportunities you need to take if you're playing at Anfield. If we go to half-time 0-0 it's a different story. We knew if we wanted to get points here we can't compete on a set-piece.

"Second half, still brave, still front-footed, good chance for Mbeumo but what a cross, what a finish [for Liverpool's second goal]. That finished the game off.

"What I will take from this is the first half performance, that will give us a lot of hope for the rest of the season."

Man of the match: Fabinho finds the net again

Another goal for Fabinho! He's now scored three goals across his last three appearances - and that's as many goals as he had scored in his previous 127 games for Liverpool.

It's some purple patch by his standards and his close-range header got his side up and running on Sunday, eventually giving Liverpool the breakthrough at the end of a dominant first half.

But it wasn't just about his goal - this was a fine all-round performance from Fabinho in the centre of the park. He led Liverpool's stats for passing accuracy among starters, chances created, duels won, aerial duels won and interceptions.

Basically, this was a performance which demonstrated why he's so important to this team. He may not always grab the headlines - although he will do if he keeps up this scoring run...

Analysis: Liverpool find the goals to keep City in sight

It may have been the weekend when Chelsea's Premier League title hopes were ended but Liverpool - despite the absences of Mohamed Salah and Sadio Mane - are still just about hanging in there after finding the goals without their star forwards to see off Brentford.

Fabinho headed in "helpfully", as Jurgen Klopp put it, from a set-piece at the end of a first half Liverpool had dominated before Alex Oxlade-Chamberlain's diving header and a gift of a goal for Takumi Minamino saw them home.

That win means they finish the weekend how they started it: 11 points behind City with a game in hand and a trip to the Etihad to come, although they are up to second in the table now.

It's a distant second and it is still going to take a remarkable swing for City to throw it away from here. But the point stands that if Liverpool win their game in hand and then beat City away from home at the start of April, theoretically Pep Guardiola's side will have to defend a five-point gap through to the final day.

That would give City relatively little room for error. But of course, that scenario depends on Liverpool being perfect from here on in themselves.

With the demands of this season - injuries, illnesses, absences - and the fixture congestion compounded by cup competitions to come, that will surely be too tall a task. But Liverpool at least showed on Sunday they can win well without two of their main men. It's kept them in the hunt… for now.

Liverpool are back in action on Thursday in the second leg of their Carabao Cup semi-final with Arsenal, live on Sky Sports Football from 7pm; kick-off 7.45pm. Brentford host Manchester United in the Premier League on Wednesday at 8pm.