A merciless Manchester City demolished Watford 6-0 at Wembley to win the FA Cup and become the first men's team to complete the English domestic treble.

After Watford went close through Roberto Pereyra and saw strong appeals for a penalty waved away, City took the lead through David Silva's smart finish from 12 yards (26), on their way to equalling the biggest FA Cup final winning margin (Bury beat Derby 6-0 in 1903).

They doubled their advantage through Gabriel Jesus' touch at the far post (38), which was just adjudged to have gone over the line before Raheem Sterling poked into the net, while substitute Kevin De Bruyne got City's third with a close-range finish having rounded Heurelho Gomes (61).

There was debate as to whether City's second goal was awarded to Raheem Sterling or Gabriel Jesus. Opta had initially handed Sterling the goal, but by an hour after the match had finished, it was officially given to Jesus.

Jesus, who started ahead of top scorer Sergio Aguero, got his goal (68), finishing coolly under Gomes after De Bruyne had slipped him through on goal, and Sterling got his second late on (81) at the far post from Bernardo Silva's fine centre.

Sterling rounded off a stellar season with his second and City's sixth (87), as City claimed their sixth FA Cup victory to go alongside their Premier League and Carabao Cup success this season. Watford, meanwhile, are still searching for a first major trophy in their history.

Watford were bright early on and should have took the lead as semi-final hero Gerard Deulofeu squared for Pereyra, but he was met by the onrushing Ederson, who denied him superbly at his feet just inside the box.

Watford then had a strong call for a penalty turned down by Kevin Friend as Abdoulaye Doucoure's shot hit the arm of Vincent Kompany. Though the hand was by his side, we have recently seen penalties given by VAR for similar incidents, particularly in Europe, though the VAR controversially opted against a spot kick this time.

City took advantage and were ahead shortly after; both David Silva and Sterling did well to win headers, before Silva span Kiko Femenia and finished left-footed into the bottom right corner.

City made one change from their final Premier League game as top scorer Aguero made way for Gabriel Jesus. There were two Watford changes as Mariappa and Gomes came in for Kabasele and Foster.

It was 2-0 before the break as Bernardo Silva's sublime ball over the defence was met by Jesus at a tight angle at the far post, and though his touch was heading over the line, Sterling rushed in to make sure by a matter of millimetres on the line. Though the goal was initially given to Sterling, after the game it was officially handed to Jesus.

Riyad Mahrez, who had been impressive, looked aggrieved to be subbed off just 10 minutes into the second half, but his replacement De Bruyne killed the game, finishing off into an empty net having taken on Gomes from Jesus' square ball as City broke.

De Bruyne was in the mood, setting up the fourth, as the Belgian's superb through ball was finished off low by Jesus from 15 yards, his fourth goal in the FA Cup this campaign.

City broke the record for biggest winning margin in a Wembley cup final as Sterling capped off a superb season with his 24th goal, striking from close range at the far post after some superb work from Bernardo Silva.

Sterling, who grew up in the shadow of Wembley, made it six late on, rebounding home after Gomes had kept out his initial effort.

Chasing an unprecedented quadruple until Tottenham dramatically knocked City out of the Champions League in April, two-time European Cup winner Guardiola was adamant City's achievement trumps winning the Champions League, with Spurs and Liverpool contesting the final in Madrid on June 1. 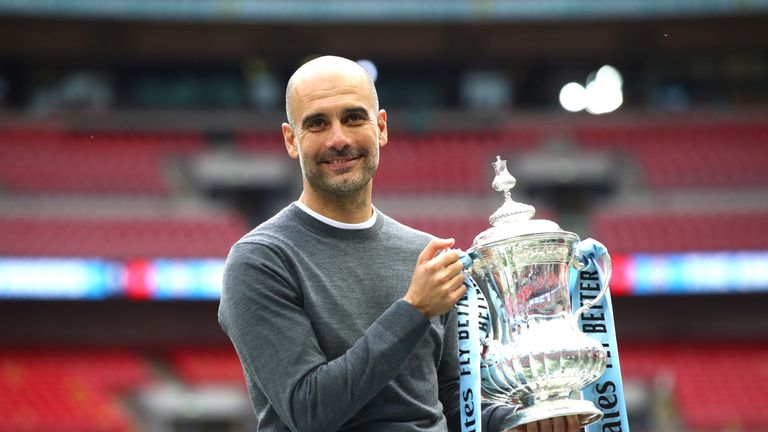 "It's one of the best seasons I have experienced as a manager. I wouldn't say the best, but one of the best for sure. To be 10 months, play in all competitions, and to be the first [to win the treble], it means we have been consistent every few days during 10 months.

Jose Mourinho was never shy about counting the Community Shield as a major trophy, and despite missing out on the big quad with Champions League defeat by Spurs, City posted on their Twitter account shortly after full-time to celebrate the four pieces of silverware they've won this season.

The Premier League fixtures will be announced on June 13 at 9am, before the season begins on August 10.