Report and free highlights as Dominic Calvert-Lewin earns Everton a dramatic point at Old Trafford after Scott McTominay thought he had won it for Manchester United; Abdoulaye Doucoure and James Rodriguez had earlier cancelled out first-half goals from Edinson Cavani and Bruno Fernandes 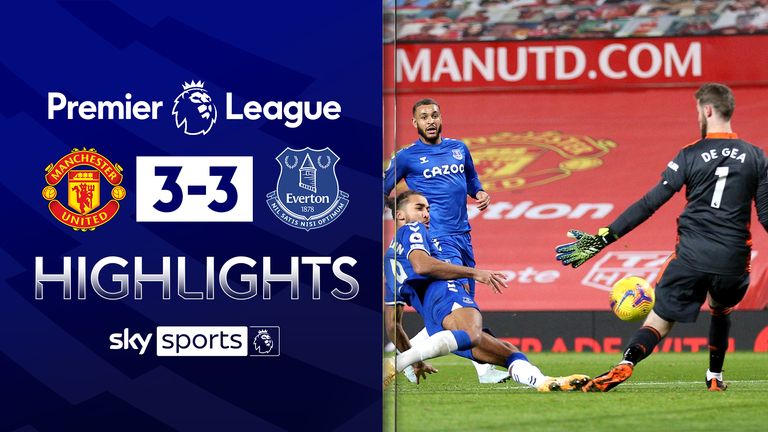 FREE TO WATCH: Highlights from Manchester United’s draw with Everton.

Dominic Calvert-Lewin's 95th-minute equaliser sealed a second sensational comeback for Everton at Manchester United in a 3-3 thriller at Old Trafford.

Carlo Ancelotti's side had already clawed their way back from a 2-0 half-time deficit with two goals in three minutes at the start of the second half from Abdoulaye Doucoure and James Rodriguez, but Scott McTominay's flicked header looked to have won it for Manchester United.

However, with the final kick of the game, Calvert-Lewin slotted past David de Gea after Lucas Digne's free-kick caused chaos in the United area.

United - who seemed in cruise control after Edinson Cavani and Bruno Fernandes had put them two up at the break - missed a chance to go joint-top of the Premier League table as a result and now sit two points behind Manchester City, who have two games in hand on their neighbours and play Liverpool live on Sky Sports on Sunday afternoon.

Everton, meanwhile, are seven unbeaten away from home and move up to sixth in the table.

Man of the Match: Edinson Cavani

Ahead of kick-off, both clubs paid tribute to the victims of the Munich Air Disaster on the 63rd anniversary of the tragedy. When play got under way, it was United who were on the front foot, with Cavani firing over after Mason Holgate's sliced clearance and Mason Greenwood drilling wide of the far post.

However, those were two chances amid a quiet opening to the game - before Cavani's classy breakthrough on 24 minutes.

The striker pulled away from Michael Keane at the back post to meet Marcus Rashford's cross and head home, adding to the Premier League and FA Cup goals he scored at Goodison Park earlier this season.

The standout Cavani was less elegant when he miscued Aaron Wan-Bissaka's powerful low cross shortly afterwards and there was then concern for Ole Gunnar Solskjaer when Paul Pogba pulled up and limped off clutching his right leg.

Everton, who had struggled to get out of their own half for much of the contest until that point, eventually registered their first shot of the match on 41 minutes when Victor Lindelof's deflected clearance fell to Richarlison - but the Brazilian could not bend in from a tight angle.

At the other end, Pogba's replacement, Fred, dragged a shot wide from the edge of the box before Fernandes showed him how it is done on the stroke of half-time.

The Portuguese looked to clip in a cross but, realising Tom Davies had afforded him time and space 20 yards out, he instead looped a shot over 'keeper Robin Olsen, with a strike baring similarities to a famous goal by Eric Cantona.

United's dominance looked set to continue into the second half when Luke Shaw fired at goal moments after the interval - but Everton remarkably pulled themselves level with a three-minute burst to stun their hosts.

Davies sent Calvert-Lewin into the box on 49 minutes and when his cross was tamely parried by De Gea, Doucoure was perfectly placed to tap home.

Doucoure then turned provider, fetching a loose ball in the United area before picking out Rodriguez, who unleashed a superb left-foot drive into the bottom corner.

Everton had won their last four Premier League away games but United responded well to ensure they did not make it five.

Olsen did well to block Rashford from a one-on-one chance but was left looking to the sky soon after when his left foot slipped away from under him as he moved to try to keep out McTominay's effort from Shaw's wide free-kick on 70 minutes.

United could easily have added a fourth, with Rashford and Fernandes passing up opportunities - and they were made to pay for missing those chances.

Five minutes into stoppage time - after four minutes of additional time had been signalled - Calvert-Lewin latched onto Keane's flick-on and tucked in an incredible equaliser from six yards.

Solskjaer - who had been set to celebrate his 100th Premier League game as a manager with a victory - looked stunned on the touchline, while Everton's players celebrated their great escape wildly.

How United lost out in the final minutes

90: The fourth official indicates there will be a minimum of four minutes added on.

92.17: Manchester United make a substitution, bringing on Axel Tuanzebe for Mason Greenwood. An extra 30 seconds would be expected to be added on for the change.

93.23: Referee Jon Moss awards United a free-kick deep in their half of the pitch. Everton's Ben Godfrey kicks the ball away, delaying the restart. "That might well get Manchester United over the line," suggests commentator Rob Hawthorne.

94:04: De Gea takes the free-kick. But instead of kicking the ball to either side of the pitch, the Manchester United goalkeeper hits the free-kick straight down the middle.

94:09: Mason Holgate beats Cavani to the header. The ball is immediately played on to Gylfi Sigurdsson who flicks it around the corner to Richarlison who in turn plays in Josh King. Running just over the halfway line, King is brought down by Tuanzebe, who has yet to touch the ball since his introduction, resulting in a booking for the defender and a free-kick for Everton. The referee blows for the foul with 94.15 on the clock.

94:49: Calvert-Lewin levels with the final kick of the match. 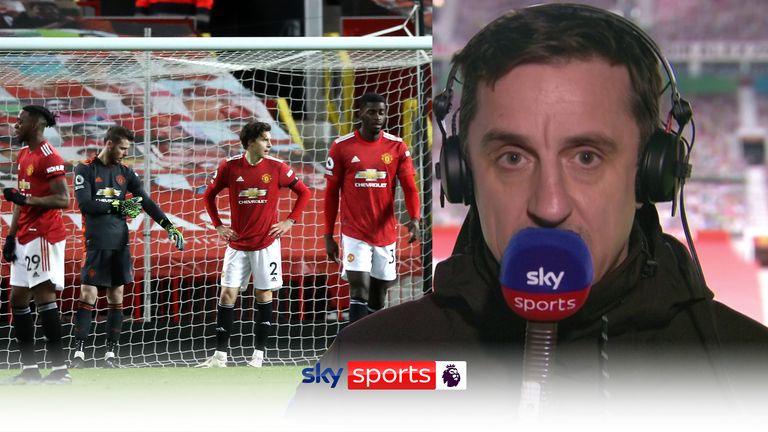 "I actually think United played well - I can't think of a better all-round performance this season. The two up front - Cavani and Fernandes - were brilliant. There was a holder in midfield but defensively they were poor in moments.

"It was like a reverse of what has been happening, where they've played poorly and won games with good attacking moments but tonight they played really well but they lost through poor defensive moments.

"De Gea at the end doesn't even come out in line with the ball - you want your goalkeeper to eat the striker. Take him out. It wasn't a great night for the goalkeeper or the centre-backs.

"Manchester United controlled the game, they responded well to the two goals they conceded, but without the fourth goal they were in a situation where with any attack you are in trouble. And it came so late that United had no time to react." 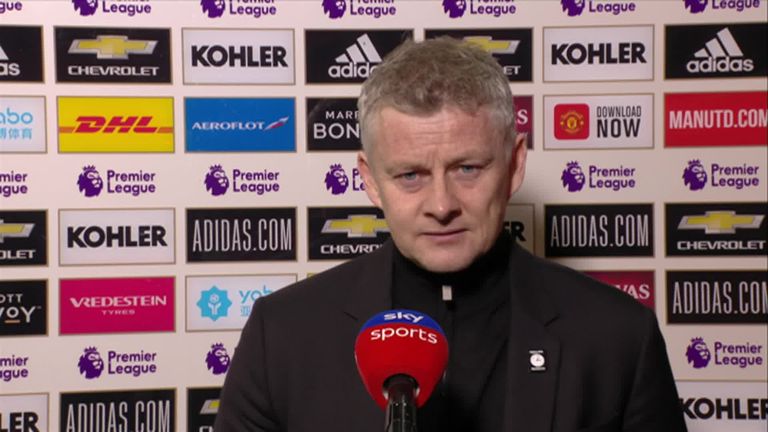 Following their draw with Everton, Ole Gunnar Solskjaer says Manchester United should not be considered as title contenders 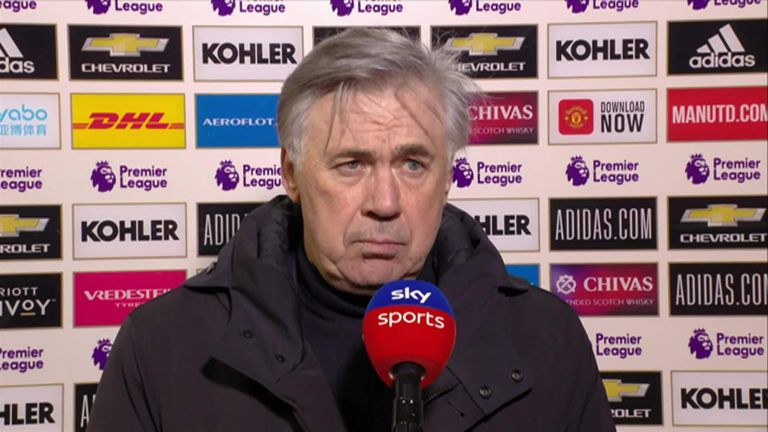