Match report and free highlights as Jadon Sancho and Marcus Rashford give Manchester United their first win of the season with a 2-1 victory over Liverpool; Reds beaten for first league game in 2022 despite Mohamed Salah's late strike

FREE TO WATCH: Highlights from Manchester United’s win against Liverpool in the Premier League.

An unrecognisable Manchester United performance of class and intensity saw goals from Jadon Sancho and Marcus Rashford earn a deserved 2-1 win over Liverpool at Old Trafford.

United had endured a week of intense criticism after their 4-0 hammering at Brentford last weekend, but responded in style to leapfrog Jurgen Klopp's side and earn a first league win over their bitter rivals since March 2018, and Erik ten Hag's first as United manager.

"I cannot believe what I have just watched," stunned former Man Utd defender Gary Neville told Monday Night Football. "I'm absolutely stunned. I didn't think it was possible tonight what I saw; I thought the players had cemented what they do, week-in, week-out over many months at the end of last season and the start of this season."

Whether a one-off or not, this was a different United. They had rattled their visitors even before Sancho was given time to turn onto his left foot in the box and fire past an unsighted Alisson (16), and David de Gea did not have a save to make before the break.

Instead, United kept up their early promise and doubled their advantage eight minutes into the second period, when half-time arrival Anthony Martial set Rashford free to beat Alisson at his near post.

"Manchester United got a lot of criticism for their defending at Brentford last week and Liverpool should be getting exactly the same treatment after this," said Sky Sports' Jamie Carragher about his former club. 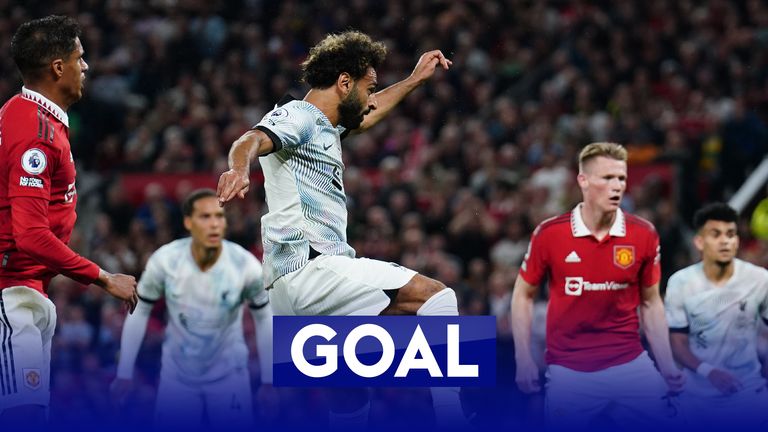 Mohamed Salah’s header gives the visitors late hope, with the score now at 2-1.

The visitors did finally rally to pull a goal back with 10 minutes remaining, as Mohamed Salah became the first player in Liverpool's history to score 10 goals against United when he nodded home the rebound from Fabio Carvalho's shot.

But the hosts' night of dogged defending continued and saw them through to a first win of the season, and the statement of intent Ten Hag had been looking for from his new side.

"We can talk about tactics but it's all about attitude," the victorious manager told Sky Sports after full-time. "There was communication, fight spiriting and then you can see what they can achieve.

Roared on by an Old Trafford crowd knowing their side needed vociferous backing, United's intensity was poles apart from the side that had crumbled so easily at Brentford nine days earlier.

Rashford's pace had already worried Virgil Van Dijk before Anthony Elanga latched onto Bruno Fernandes' superb square pass and smacked the base of the post when clean through five minutes in.

The tempo of United's attack was unrelenting and after some fine one-touch link-up between Christian Eriksen and Elanga, Sancho was the coolest man in Old Trafford to switch the ball onto his left and slot it into the unguarded corner of Liverpool's net. Marcus Rashford puts Manchester United 2-0 up over Liverpool, having held his nerve in a one-on-one with Alisson.

"You watch this great Liverpool side over the last three or four years, you don't often see them like this - if at all," was Neville's damning assessment of the visitors' start.

They did improve from their shellshocked start but not enough to test De Gea's resolve before the break, and instead came closest when Fernandes cleared a corner straight into Lisandro Martinez on his own goal-line.

"United are at it," said former Manchester United captain Roy Keane at half-time. "The major disappointment is that they've only scored one goal."

It was not something Keane and United would have to worry about for long. A heavy Henderson touch fell for Martial, whose quick thinking released Rashford in behind Alexander-Arnold.

The newly confident No 10 raced clear of the visitors' backline before slotting the ball inside Alisson's near post and showing the personal importance of the goal with an emphatic celebration in front of the Stretford End. 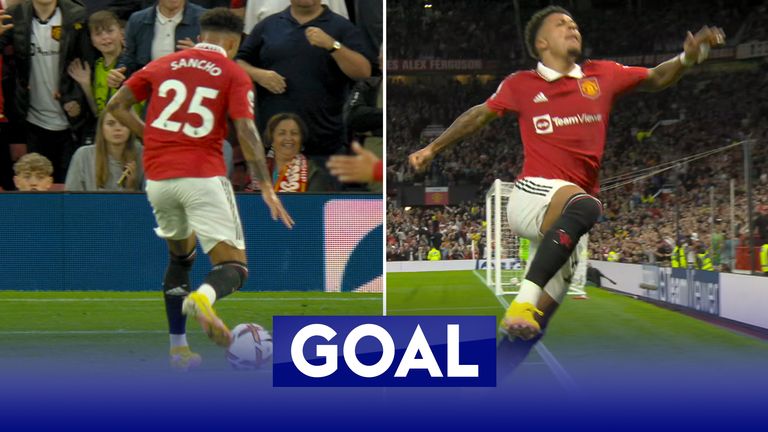 Jadon Sancho gives Manchester United the lead over Liverpool, after keeping his composure in front of goal.

Even as Liverpool then pushed forward their defensive woes remained, and Rashford was allowed to dance past three challenges before arching a dipping effort just over Alisson's bar from the edge of the area.

The Reds, who had scored in every Premier League game since December 2021, threatened to make a game of it late on when Carvalho's shot was palmed out by De Gea to Salah, who had the simple task of beating the stranded goalkeeper with a near-post header.

But for all of Liverpool's pressing for an equaliser in the final 10 minutes, they never threatened to derail a special night for United and Ten Hag, with the pressure now shifted onto Klopp's side after failing to win their first three league games for the first time in a decade. 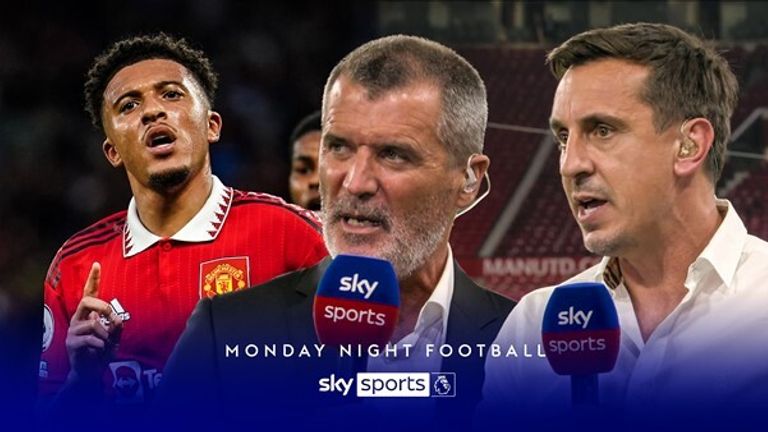 Jamie Carragher tore into Liverpool's "embarrassing" defending in their 2-1 defeat at Manchester United, while Gary Neville praised his former side for showing "fight, spirit and energy" after a torrid start to the season.

"Liverpool were absolutely shocking defensively. They were not at the races at all," Carragher said.

"Every time United went forward in that first half they looked like they were going to score. It was embarrassing. Liverpool were all over the place.

"United were outstanding, but Liverpool weren't ready for a derby game. They didn't look ready for the game and that will worry Jurgen Klopp right now." 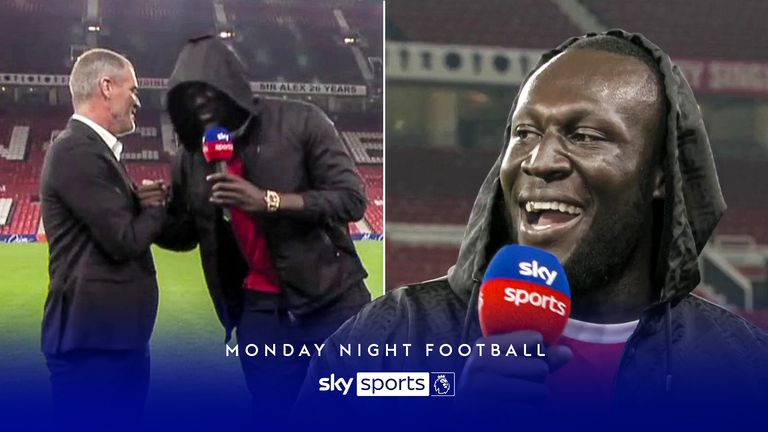 "I'm really proud as a Manchester United fan watching these players and I never thought I'd say that after the past few weeks," countered Neville.

"I don't know what's happened this week on the training ground, but they've responded. I don't know what it is but I cannot believe what I have witnessed. They outrun Liverpool, they outsprinted Liverpool."

Ten Hag: We have to do this every game 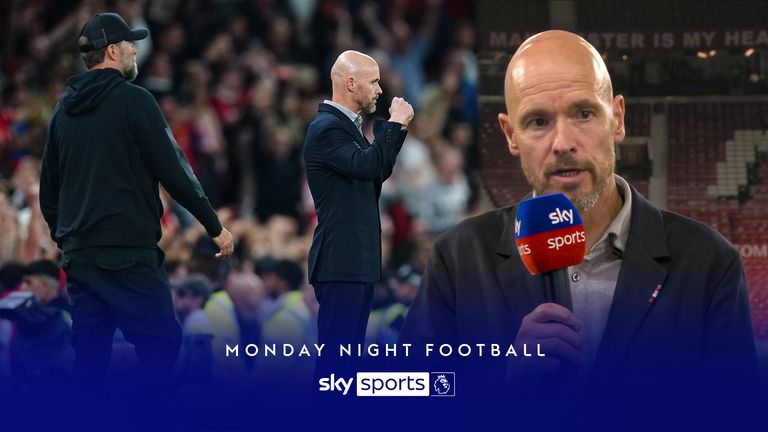 "We can talk about tactical but it is all about attitude. There was communication and a fighting spirit.

"It is not always about what I said. I said we have to act and not to talk a lot and make sure you are a team and battle and be brave and give each other options.

"I said to [the players] we have to act, not talk a lot. Make sure you are a team and battle and be brave. It's not only about spirit out of possession.

"Sometimes strikers think they cannot do it because they have to save their energy for offensive actions. Nowadays it's a demand and that is what you saw. It makes me happy Rashford and Sancho scored the goals.

"I am happy with the performance but we have to bring it every game. Don't just bring it against Liverpool. Every Premier League game is difficult, we need to bring it to every game. It starts, once again, with the spirit."

Klopp: If we played slightly better, we should have won 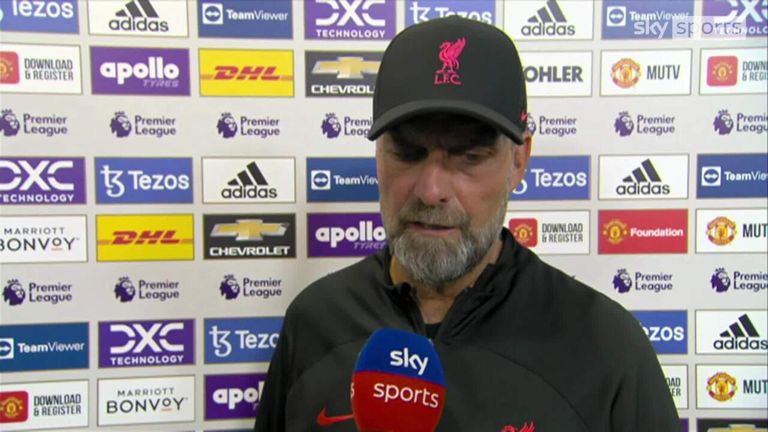 "It's obvious we are in a tricky situation injury-wise, we get through the week with 14-15 senior players available, we have to make sure none of them get injured because there's no real options left any more.

"Even with our situation, but playing a little bit better, if we were a little more convinced about what we do we should've won this game. I know it sounds ridiculous, but that's how I see it.

"Then they scored the goal, and we took over, and played the game we wanted to play, more or less.

"We were unlucky with situations, especially around set-pieces. I don't know how one ball didn't go in, in a game like this against an opponent like United it would be very helpful if we could score in that moment and go in 1-1 at half-time.

"Conceding the second one doesn't help, and then we score ours and then it's a hectic game with a lot of interruptions - and not the result we wanted.

"Maybe they were [sharper], that's not right of course but when we calmed down we were there. We had an extreme number of shots for an away game at United, we should use more of these moments if we do that."

Manchester United's next assignment is a trip to Southampton on Saturday lunchtime. Erik ten Hag's side then travel to Leicester City on September 1, before hosting Arsenal three days later, live on Sky Sports.

Liverpool now face two home games - first against Bournemouth this Saturday; kick-off 3pm, then against Newcastle the following Wednesday; kick-off 8pm. Focus will then turn to the Merseyside derby against Everton in the Saturday lunchtime kick-off on September 3.