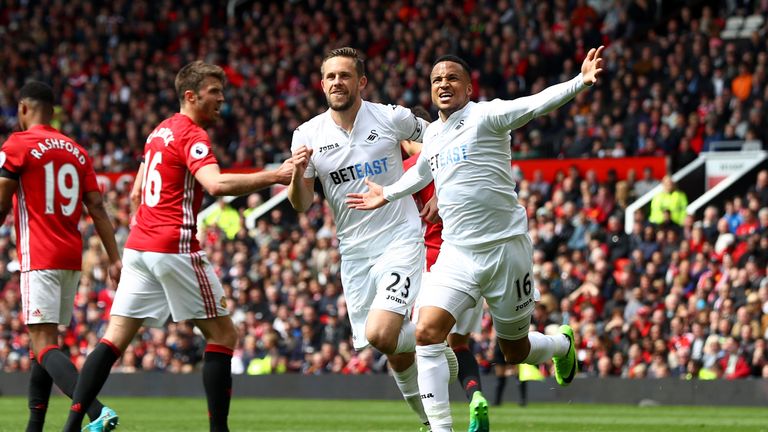 Manchester United missed the chance to move into the Premier League top four as Gylfi Sigurdsson's free-kick earned Swansea a 1-1 draw at Old Trafford on Sunday.

Wayne Rooney's penalty on the stroke of half-time, controversially awarded after Marcus Rashford went down under a challenge from Lukasz Fabianski, appeared to have United on course for victory before Sigurdsson curled in 11 minutes from time.

The point was well deserved and could prove precious for Swansea, who remain in the relegation zone, two points behind Hull with three games remaining to preserve their Premier League status.

Meanwhile, Manchester United extended their unbeaten Premier League run to 25 matches, but missed the chance to move into third ahead of Manchester City's game with Middlesbrough and Liverpool's trip to Watford on Monday Night Football.

And Jose Mourinho's frustration will be even greater after injuries to defenders Luke Shaw and Eric Bailly ahead of Thursday's Europa League semi-final against Celta Vigo.

Shaw limped off as early as the ninth minute, replaced by Antonio Valencia, in a first half which saw Swansea dominate both possession and chances.

Bailly's weak clearance almost deflected in off Sigurdsson, but ricocheted just wide, and Fernando Llorente forced a smart save from David de Gea with Daley Blind forced to head the rebound away.

Sigurdsson was inches away from tapping into an empty net after De Gea used his feet to keep out Jordan Ayew's low shot, but Swansea failed to make their superiority count and they were punished by a harsh penalty in first-half injury time.

Rashford latched onto Jesse Lingard's through ball and nicked the ball past Fabianski as he dived at his feet, but the United player appeared to engineer contact and went down easily.

Referee Neil Swarbrick delayed before pointing to the spot amid furious protests from the Swansea players and Rooney sent the goalkeeper the wrong way with almost the final kick of the half.

The United skipper nearly added a second, but his goalbound shot was blocked by team-mate Anthony Martial, before Bailly was injured tackling Llorente and was replaced by Matteo Darmian after an hour.

Fabianski reacted brilliantly to stop Martial's deflected shot with his feet and later pushed away Valencia's rasping drive, to keep Swansea - who saw Jefferson Montero stretchered off six minutes after coming on as a 65th-minute substitute - in the game.

And they were rewarded by Sigurdsson's sumptuous free-kick in the 79th minute, awarded after Rooney fouled Ayew on the edge of the area.

Ander Herrera stood on the goal-line by the post, before leaving that position to join the wall, and the Swansea midfielder punished him by curling the set piece to where the Manchester United midfielder had been standing to level up the game.

It should have been even better for Swansea when Sigurdsson curled a free-kick into the area in injury-time, but Llorente could not connect with the goal at his mercy.

However, Swansea boss Paul Clement will surely be satisfied with a point ahead of games against Everton (h), Sunderland (a) and West Brom (h) as their survival scrap looks set to go down to the wire.

A disappointed Mourinho will now focus his attention on Thursday night's Europa League semi-final before United continue their top-four push at Arsenal next week on Super Sunday.

Man of the Match: Gylfi Sigurdsson