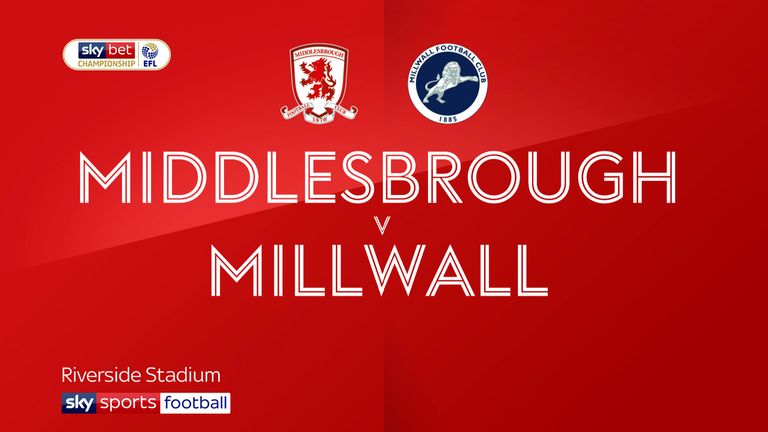 Highlights of the Sky Bet Championship match between Middlesbrough and Millwall

Neil Harris was sent to the stands after appearing to strike a member of Middlesbrough's coaching staff as his Millwall side battled back to claim a 1-1 draw at the Riverside.

Tom Bradshaw scored with his first touch as a substitute to cancel out Paddy McNair's opener for Middlesbrough, but the most dramatic incident of the day occurred on the touchline shortly before the break.

Harris appeared to strike Middlesbrough first-team coach Leo Percovich in the back as he wrestled to try to get hold of the ball, and referee John Brooks sent him from the dugout as he showed a red card.

Harris' loss of composure was completely out of the blue, with his Millwall side having dominated the first half on Teesside.

Matt Smith headed Murray Wallace's cross wide after outmuscling Ryan Shotton at the back post, before Ben Thompson fired in a 20-yard effort that Darren Randolph acrobatically tipped over the crossbar.

Millwall went even closer from the resultant corner, with Smith powering in a header that would have gone in had Adam Clayton nodded the ball against the underside of the crossbar from his defensive position on the goalline.

Smith set up Thompson for another effort that was blazed over the bar shortly before half-time, but the first half ended in acrimonious fashion as Millwall boss Harris was sent to the stands.

Harris clashed with Percovich as he tried to get the ball back for his side to take a free-kick, and appeared to strike the Middlesbrough coach in the back.

After discussing the incident with the fourth official, Brooks waved a red card in front of the Lions manager, who is likely to face further disciplinary action from the Football Association.

Harris was forced to watch the second half from the directors' box, and was almost able to celebrate a goal just four minutes after the break.

Randolph's dreadful clearance went straight to Smith, but the Middlesbrough goalkeeper atoned for his error immediately as he got down smartly to keep out the Millwall striker's low shot from the edge of the area.

Boro thought they should have had a penalty moments later, but while Britt Assombalonga's header from Jonny Howson's cross appeared to strike Mahlon Romeo on the arm, nothing was given. Had VAR been operational in the Championship, it would almost certainly have been a spot-kick.

The hosts were furious at that stage, but their mood changed markedly when McNair opened the scoring with 20 minutes left. Ashley Fletcher's through ball released the Northern Ireland international into the area, and he slotted a precise low finish into the corner.

Middlesbrough's lead lasted just six minutes though, with Millwall substitute Bradshaw scoring within a minute of coming on to the field. Smith nodded a corner back across goal, and Bradshaw prodded home from close range.

The visitors came close to claiming a winner with three minutes left, but Smith headed Connor Mahoney's free-kick wide from no more than three yards out.

Jonathan Woodgate: "It's one of those things that happen in football, and I don't want to see Neil get sent off. I didn't think he deserved to. He's a fantastic guy and a top manager, and I think the referee can deal with that better. There's no point in giving him a red card for the sake of giving him a red card.

Neil Harris: "I don't think there's a problem between me and the Middlesbrough staff. What I will say is that I went into their technical area, and that's a no-no. So apologies to Jonathan (Woodgate) and his group for that. We were so dominant in the first half that I was trying to hurry along with the game. He's got the ball under his arm, and I sort of wanted to hit the ball from under his arm. It wasn't aimed at the coaching staff, but he's moved and I've hit his arm.

"There's no issue there, and I was a little bit surprised I was sent to the stand for it considering there was never going to be an issue with Middlesbrough's coaching staff. I'm a little bit disappointed with that when I thought the fourth official might have had a little bit more of an input into various decisions on the pitch."