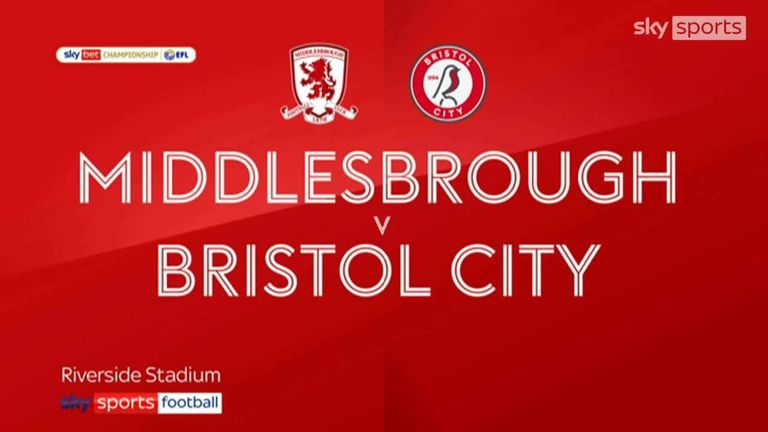 Uche Ikpeazu and Matt Crooks found the net for the first time in a Middlesbrough shirt to secure a 2-1 Championship victory over Bristol City at a noisy Riverside Stadium.

Boro deserved the lead and looked in complete control once Ikpeazu, who moved from Wycombe this summer, had found the net with seven minutes remaining of the first half.

But Nigel Pearson's Leicester old-boys, Matty James and Andy King, combined to level through the latter's header on the hour.

The impressive Crooks - an arrival from Rotherham - was then on hand 10 minutes later to grab the winner for the home side from inside the area.

That made it the perfect outcome for Boro boss Neil Warnock who, despite being in charge for more than a year, was overseeing his first Middlesbrough game in front of a big Riverside crowd.

It looked like Bristol City would make it hard for the hosts after a decent opening five minutes from the visitors.

But from that moment on, the Robins struggled to make an impact in the final third until the equaliser and it was the home side that created the first half-chances.

Ikpeazu was lively enough along with Crooks, Isaiah Jones and Djed Spence in the final third for Middlesbrough.

Jones - after impressing as a substitute at Fulham six days earlier - was quick to make his mark again with a run and pass into the area for Crooks' first-time effort to require a save from goalkeeper Dan Bentley.

A couple of minutes later, Crooks was involved again. This time he got to the byline to cross into the danger area where Spence arrived to head the ball down and wide.

And when Ikpeazu had dragged an effort wide following a nice pass from Paddy McNair, there was a sense that Bristol City were about to cave in.

In the 38th minute, Crooks broke into the visitors' half and rolled Jones in down the left. The young winger beat Zak Vyner before his delivery into the box was only helped on by Rob Atkinson for Ikpeazu to hammer the ball in from close range.

Jones was quick to make an impact after the restart too. After cutting inside from the left again, his finish was not as impressive and he rolled his effort into the hands of Bentley.

But after Spence had hit the palms of Bentley following another Jones pass, City found a new lease of life and they were level on the hour from the Foxes combination.

James' delivery from wide on the right into the area was watched by red shirts and that allowed King to coast in and head beyond goalkeeper Joe Lumley.

Middlesbrough regained the lead 10 minutes later as Ikpeazu's knock down from McNair's deep cross allowed Crooks to move ahead of his marker and finish.

There were a couple of late scares from the away side but Boro held on.

Middlesbrough's Neil Warnock: "I was gobsmacked before kick-off when I came out, it was an amazing sight, that is why I am in the game. I have been here I don't know how many months, and that's what I have been waiting for. I thought at 1-1 they were brilliant. We had a 10-minute sticky spell. All credit to them for helping us through. It was great to score two in your first home match in front of the fans. I went to clap them after the game, they were all over the shop. It was fabulous.

"A big 'thank you' to them from us. Everywhere deserved a clap, they contributed all over the ground. Great to see so many young fans inside too. And the two new signings getting on the sheet, fabulous. No disrespect to Uche, but we can't have one striker. Chuba Akpom has gone down with Covid. We had to stick it out. We were dominating for large periods."

Bristol City's Nigel Pearson: "We were careless today. We had enough possession, opportunities in the game to get something out of it. We looked pretty comfortable for most of the game. Boro are a team who want to put pressure on you through set-plays and we gave needless set-plays away. After fighting to get back into it, we conceded a very sloppy second.

"The first half we were careless, relatively comfortable but our possession wasn't what I would expect it to be, not of the standard I would expect. Neil's sides are always hard working, committed. I have a lot of respect for them. But the three goals we have conceded in the league have all been in the six-yard box. I expect us to be able to deal with situations better than we have so far. Back to work."