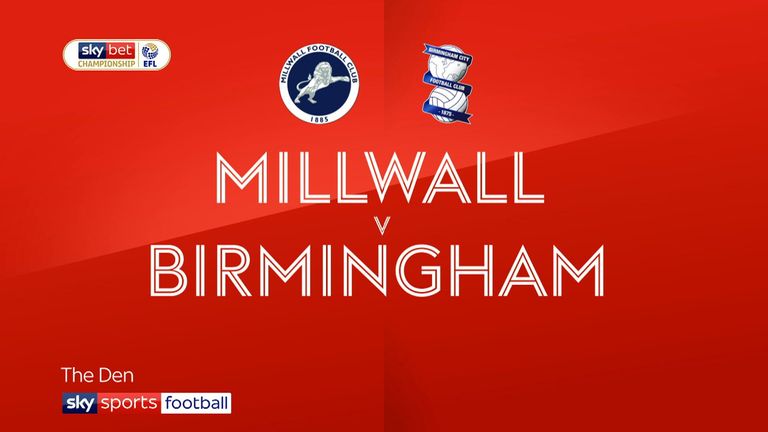 Highlights of the Sky Bet Championship clash between Millwall and Birmingham

Birmingham earned a hard-fought 2-0 win over 10-man Millwall at The Den on Wednesday to close the gap to the Sky Bet Championship play-off places.

James Meredith's first-half own-goal and Michael Morrison's close-range finish in the second were enough to secure the points, with the hosts having Ryan Leonard dismissed for a second booking after just half an hour.

The visitors ended a three-match winless run and moved up to 10th, just four points off the final play-off spot.

Millwall remain in 21st spot, above the relegation zone only on goal difference.

It took just 11 minutes for Birmingham to break through, as Che Adams burst down the left and breezed past several home defenders. His shot from a tight angle cannoned off the post and into the path of Meredith, who inadvertently bundled the ball into his own net under pressure from Lukas Jutkiewicz.

Shane Ferguson fired a long-range free-kick over the bar as the hosts struggled for a foothold in the game.

The hosts were rocked further when Leonard was shown a second yellow card on the half-hour mark. Having already been booked early on for cynically stopping a counter-attack, he was dismissed after a heavy tackle on Maikel Kieftenbeld.

Garry Monk's side threatened to extend the lead as Jacques Maghoma danced his way into the box but was denied by Jake Cooper's block. From the resulting corner, Jordan Archer had to be alert to deny Maghoma from a well-worked corner routine shortly after as Birmingham pressed.

The depleted hosts demonstrated some intricate passing moves, but lacked the penetration to test the largely peripheral Lee Camp in the opposition goal.

Birmingham went close early in the second half as Maghoma teed up Adams, but Archer got down well to claw away his effort.

Millwall started to threaten as Camp saved first from Jed Wallace's free-kick and then Cooper's follow-up.

Despite their disadvantage, the Lions enjoyed a spell of dominance, forcing their opponents back into their own half, but couldn't conjure a leveller.

With 15 minutes left, Maghoma's corner almost beat Archer, who could only palm it away, and captain Morrison was on hand to lash home the loose ball

The lively Jutkiewicz came close to a goal of his own late on, but flashed a shot wide.

Despite a valiant late push, Millwall couldn't produce a comeback and Neil Harris' side are now four games without a win.

Neil Harris: "Ten vs 11 at Championship level and I thought we were the better side for long periods. I think the second goal was the killer really, it knocked the stuffing out of us and the belief out of us to get something. When it was 1-0 we were slightly on top of the game. I thought a chance would come our way.

"With the 10 men I thought we had a right go. Don't get me wrong, a right go for this club is the bare minimum, but the players showed character, desire, showed some real quality at times. I will find a way of getting it right."

Garry Monk: "In terms of what we needed to do, it was the perfect response. We lost a huge game on Sunday to our rivals and we know how much that hurts for our fans and ourselves and everyone at the club.

"Losing derby games, you never quite get over it, but we wanted to show a response to our fans. Those two things are what we set out to do and we accomplished them. We are very pleased with that response."