Millwall 0-2 Blackburn: Rovers back to winning ways to ease pressure on Tony Mowbray 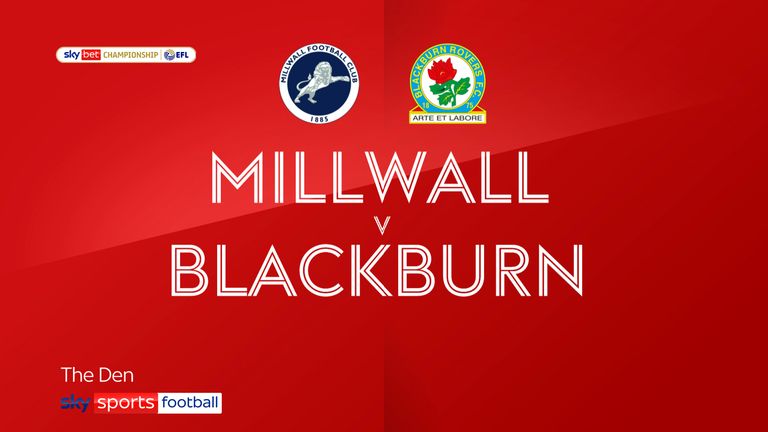 Blackburn claimed their first win in seven Sky Bet Championship games with a 2-0 victory over Millwall at The Den.

Deflections were ultimately the undoing of Millwall as Bradley Dack's 20-yard strike gave Rovers the opener and a ricochet off the returning Sam Gallagher sealed the win in the second half.

After an uneventful first 15 minutes, it was the visitors who broke the deadlock with the first shot of the match.

Midfielder Dack picked up the ball on the edge of the box and after feinting to shoot on his left, cut back and let rip with a right-footed shot that deflected off Shaun Hutchinson, giving Bartosz Białkowski no chance.

Millwall looked lost for ideas going forwards and nearly put more pressure on themselves when Białkowski's attempted clearance hit Tyrhys Dolan in the box but the ball just ran away from Ben Brereton, who was coming back from an offside position.

Blackburn had one more chance to extend their lead before the break when Barry Douglas curled a set-piece in with his left foot and Gallagher did well to get up highest and meet it, but his header looped well over the bar.

Gary Rowett opted to change his mode of attack just before the hour mark, introducing Matt Smith off the bench and the big striker almost made an immediate impact but could not direct Scott Malone's cross on target.

Malone then had an opportunity to test Thomas Kaminski himself but his free-kick was straight at the Belgian and moments later Blackburn spurned a chance of their own as Gallagher's effort was easily saved by Białkowski.

As 70 minutes approached John Buckley outpaced the Millwall defence to reach the byline and cut it back for Dack, who was charging in and looked hampered by a challenge from Ryan Woods as he shaped to shoot.

A corner was signalled by referee Matthew Donohue but Dack and his team-mates were convinced it should have been a penalty.

Both managers then made triple substitutions and it was Liverpool loanee Harvey Elliott who made the biggest difference for Blackburn.

The 17-year-old burst into the box and fed fellow teenager Dolan, whose shot deflected off Jake Cooper, onto the chest of Gallagher and into the back of the net - although the Rovers striker knew very little about it.

The hosts almost got themselves back into the game late on when George Evans struck the upright and Kaminski smartly righted himself to keep out Jon Dadi Bodvarsson's follow up.

Millwall's Gary Rowett: "In the Championship sometimes you've got to show different sides to your game and I just left that today we didn't show enough quality and composure in the final third. We conceded two poor goals and as the game goes on we have a couple of chances - if I look at both teams though I'd say that Blackburn deserve the win today but there wasn't really that much in it again.

"A bit of the frustration and disappointment is that I was thinking 'can we go again?' after Tuesday but they had more energy and aggression than us early in the game and the second goal just makes it a disappointing afternoon for us.

"We've got players out that would more-than-likely be getting in our side but I don't like using those things as excuses - although it is inevitably going to have a detrimental impact when you've got less players to choose from and so many games in such quick succession."

Blackburn's Tony Mowbray: "I didn't think the level of performance was exceptional but we took our opportunities today and restricted theirs - we saw them off relatively comfortably in the end. Even after the run we've been on, it doesn't seem evident to me that we're a team that is lacking confidence and belief and we're a team that knows it's a good team, we just haven't had our breaks.

"I don't usually give special mentions to players but I think he [Tyrhys Dolan] deserves one today - he was like a whirlwind out there. I played centre-half and to think that the kid would be chasing you down after every touch like he did - it was an amazing performance for such a young guy.

"It's been really difficult with him (Dack) to get him back up to speed and he understands that the team has to come first, but it might be after a proper six-week pre-season that we see the very best of Bradley again. He's got enough quality to play in the Premier League no problems."