Report and highlights from the Sky Bet Championship clash between Millwall and Luton Town at The Den as goals in either half from Harry Cornick steered the Nathan Jones' Hatters to victory on Saturday afternoon. 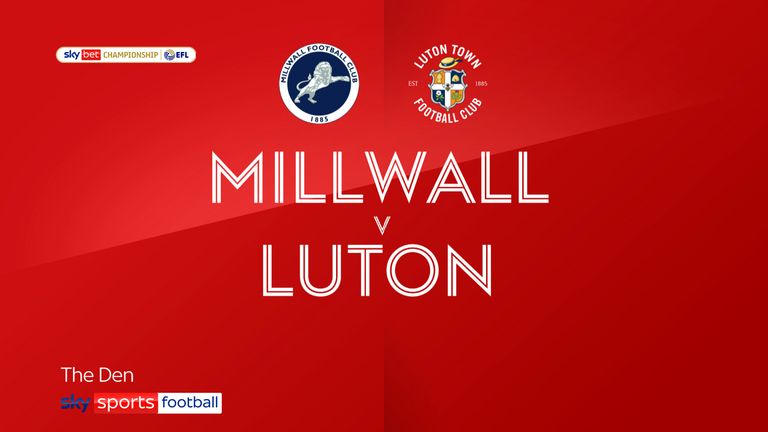 Highlights of the Sky Bet Championship match between Millwall and Luton.

Harry Cornick grabbed both goals as Luton claimed a 2-0 victory at Millwall that allowed them to leapfrog their mid-table opponents in the Championship table.

The Hatters were clinical in attack while keeping their hosts at arm's length for the most part as the Lions' seven-match unbeaten run came to an end.

Millwall saw a late chance to force a rousing finale pass them by when Jed Wallace's penalty was saved by Luton goalkeeper Simon Sluga.

His heroics, coupled with Cornick's double, allowed Nathan Jones' side to move up to 10th in the table following their fourth league win of the season.

Wallace drove down the left for Millwall in the early stages, but could only shoot tamely at Sluga at his near post.

But it was the Hatters who broke through after 11 minutes when James Bree won possession before running the ball on to Jordan Clark, who laid it off for Cornick to whip his shot into the top corner.

The Lions tried to hit back, with Danny McNamara pulling the ball back into a dangerous area for Benik Afobe, whose point-blank effort was superbly blocked by Clark.

Jake Cooper then headed wide from George Saville's deep cross, as most of the play began to take place inside the Luton half as the first period wore on.

Sluga then looked to be in trouble when he missed Wallace's free-kick and the ball came off Daniel Ballard, but a free-kick was given in the Croatian's favour.

Luton retained their 1-0 lead into the break and they continued to hold their hosts at bay with a degree of comfort in the early stages of the second half.

They then doubled their advantage in the 53rd minute, as Pelly-Ruddock Mpanzu found Clark in space and the ball was then played through for Cornick to finish confidently into the bottom corner.

Mpanzu almost added a spectacular third when his fantastic strike from 30 yards clattered against the bar, with Bartosz Bialkowski rooted to the spot in the Millwall goal.

Sluga had not had much to do, but he was called into action when he pushed away Wallace's free-kick from 25 yards out as the Lions' desperation for a goal back grew.

They had a great chance for one after Kal Naismith conceded a penalty for handling in his area, but Sluga made a superb save down to his right to keep out Wallace's spot-kick.

There was still one last chance for a Millwall consolation, but Sluga thwarted them again with almost the last touch by keeping out Matt Smith's header.

Millwall's Gary Rowett: "It was disappointing because to go into the game off the back of a seven-game unbeaten run, to have won two games in a row and be three points off the play-offs… To be really quite excited about putting a performance in front of our fans at home that showed we're desperate to get where we want to be. I'm disappointed today - I just think we didn't look like we quite had that extra bit of drive, that extra bit of competitive nature about us.

"We looked like we wanted the game to be a little bit nice and I felt Luton came and did all the right things an away team needs to do. They've scored with two counter-attacks, when we had opportunities to play forward and opportunities to deal with, and we didn't. We had the ball nicked off us trying to place nice little passes."

Luton's Nathan Jones: "[Cornick] has probably been labelled as not being able to finish in times past. He's a wonderful player for us - last year he had chances and scored one goal, but he had chance after chance last year. He's just such a dangerous player and we're delighted with him because we've had him for three or four years now - we signed him in League Two.

"The first goal was top draw. If that's on Match of the Day tonight, from a Premier League player, then we're drooling a little bit. The second was a finish that he really works at week in, week out because he gets those chances regularly. Sometimes he doesn't score, but he's adding a real clinical edge to his game and we're delighted because it made the difference today. He's starting to turn all that endeavour and that movement into goals, so we're very happy because we're reaping the benefit."