Millwall 1-3 Norwich: Canaries win at The Den to go back top of Championship 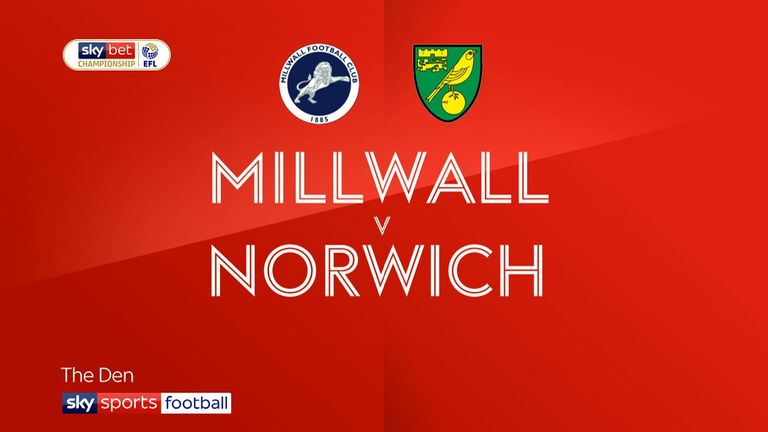 Highlights from the Sky Bet Championship between Millwall and Norwich

Norwich fired themselves back to the top of the Sky Bet Championship table by seeing off strugglers Millwall 3-1.

Daniel Farke's league leaders secured their third win on the bounce and their fifth in six games as Millwall were condemned to back-to-back defeats at the Den for the first time since October 2016.

While Norwich made it a hat-trick of wins, Neil Harris' outfit have now lost their last three.

The Lions' recent dip in form leaves them tottering precariously above the dreaded drop zone - just a point above the bottom three.

The hosts were unfortunate not to go ahead early on. Jake Cooper's powerful header was blocked on the line before Steve Morison's follow-up was also cleared on the line.

But the title-chasing Canaries took the lead in the 16th minute.

Millwall keeper Jordan Archer did well to deny Onel Hernandez his eighth goal of the season but the rebound fell kindly for Stiepermann to open the scoring.

Just before the break, Pukki could only fire straight at Archer and the Lions levelled on the stroke of half-time when Shaun Williams headed home Morison's flick-on off the frame of the goal.

Norwich had the first glaring chance of the second period.

It fell to Max Aarons as his strike from the right-hand side trickled past a post.

Just before the hour, Morison headed the ball into Gregory's path only for the striker to fail to connect cleanly, but with 21 minutes left, the table-toppers took the lead through Zimmermann as the German rose highest to meet Emi Buendia's corner and send his bullet header beyond a helpless Archer for his first Norwich goal since his debut.

Buendia then set up Pukki to wrap the game up 10 minutes later as the Finn fired home his 28th strike of the season.

The visitors survived a late scare as Krul produced a fine double save to keep out Morison and then Mahlon Romeo and at the death, Archer denied Norwich a fourth with a good low stop from Pukki's strike.

Neil Harris: "The league's the best it's ever been in my opinion, with the strength in depth of the teams. It's now about us taking the responsibility and getting the results and not relying on other results to bail us out.

"Bolton's a much bigger game for us than playing Brighton in the FA Cup. We aren't going to win the FA Cup. Staying in the Championship is our priority and I know that's the mindset of the players as well. Norwich were excellent. Their attacking threat is superior to anything else in this division."

Daniel Farke: "It feels a lot better than the last time I came here [a 4-0 loss in August 2017]. It's a really tough place to come," said the Norwich manager. They were highly motivated but my lads were brilliant and we've picked up a vital win.

"After this test, it feels even more pleasing that we could withstand it. For me, it was one of our most complicated games in recent weeks. We play beautiful football but we also score from set-pieces and our defenders chip in when they can. To be there [top of the table] with 69 points is a shock to many but it is no coincidence. We've worked very hard to be where we are."