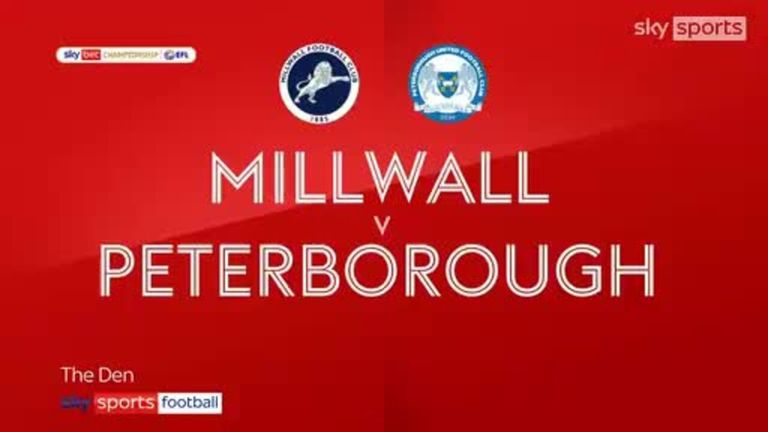 Highlights of the Sky Bet Championship match between Millwall and Peterborough United.

Millwall kept alive their narrow hopes of a Championship play-off spot ahead of the final weekend of the season with a 3-0 thrashing of already-relegated Peterborough.

Benik Afobe lashed home his 13th of the campaign from a corner to deservedly break the deadlock for the dominant hosts in the 53rd minute.

Josh Knight put into his own goal in trying to clear a cross from substitute Jed Wallace for Millwall's second and moments later Wallace delivered a brilliant ball for George Saville to head home a third.

Millwall endured a frustrating opening 45 minutes in which they saw most of the ball but could not find the back of the net.

Oliver Burke delivered a brilliant ball into the path of Afobe, who was beaten to it by David Cornell in the Posh goal.

And they enjoyed long spells of possession in front of a packed, raucous Den, who more than played their part in getting their side over the line.

Danny McNamara saw a mis-hit cross sail narrowly wide before Tom Bradshaw was denied by Cornell's fast reactions, the keeper closing down the Millwall striker's space after he had ghosted into the penalty box unattended.

The chance of the half, however, fell to Peterborough's Jonson Clarke-Harris and despite it being very much against the run of play, he should have done better.

Played in by a cute Sammie Szmodics slide pass, Clarke-Harris opted to try and finish with his first touch, allowing Bartosz Bialkowski to get down and save with his legs.

The miss would prove to be crucial, as Rowett's men turned on the style after the interval.

Saville was denied by a brilliant save from Cornell, which set the tempo for the remainder of the game.

Bialkowski was kept on his toes - Jack Marriott's 20-yard effort seeing him tip the ball round the post - but that was as good as it got for Peterborough.

Afobe had two attempts before finishing unerringly into the far corner, taking full advantage of a poor defensive header from Clarke-Harris.

Millwall went through the gears, Wallace drove a wicked low delivery right across the six-yard box but saw it slide inches out of the reach of his team-mates.

Murray Wallace and Saville had twice struck the woodwork within the same attack, preceding a floated cross in from the right by Wallace.

The unfortunate Knight could only prod past his own goalkeeper, under pressure from Jake Cooper on his shoulder.

Just three minutes later, Saville got the goal his industrious performance deserved, rising highest at the back post, Wallace again supplying the assist.

Millwall will travel to Bournemouth needing a win and other results to go their way, but for 17,000 fans at the Den, the dream remains alive.

Millwall's Gary Rowett: "Other than adding a few more goals to it, I think the second-half performance was really good at times - it was quite scintillating, with lots of chances. And, to be honest with you, we should have probably scored more goals.

"We had some good opportunities and we missed some chances. There were some great balls across the box which were flashing through and needed someone to get on the end of it...we're at the stage of the season where a couple more goals might have made it even more interesting and we probably should have had them."

Peterborough's Grant McCann: "I'm not one to ever blame officials for a result and we've lost the game today because of us. But I will say the decision to give them a throw in, which is a massive strength for them, has cost us the first goal.

"It's swung the momentum for Millwall because up to that point we were comfortably the better team."