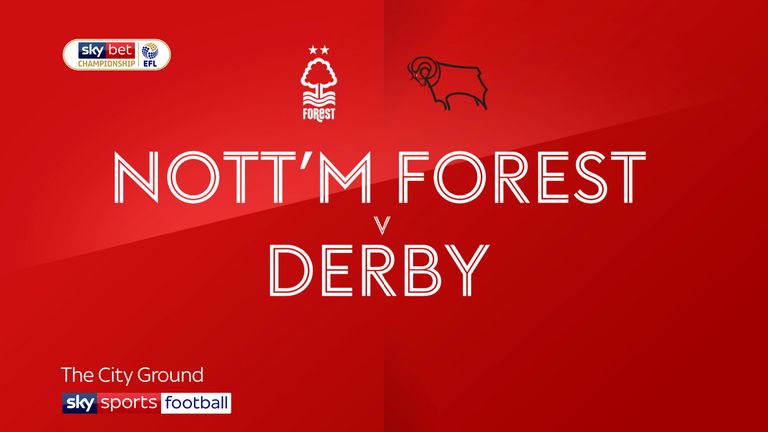 Lewis Grabban seized on a calamitous defensive error to earn Nottingham Forest the East Midlands derby spoils in a 1-0 win against Derby at the City Ground on Saturday.

The two rivals reached half-time all square after a breathless opening 45 minutes, in which Tom Lawrence had the best chance to put Phillip Cocu's Rams ahead after just five minutes.

But Forest's pressure finally paid off after the break when Grabban scored his seventh goal of the season after Jayden Bogle's glaring error as the visitors attempted to play out from the back (56).

Sabri Lamouchi's Forest stay fifth in the Championship table as a result of the victory, while Derby continue to languish in the bottom half of the table and drop to 16th.

How Forest won their third East Midlands derby in succession

There's rarely an uneventful meeting between these two, who are separated by just 13 miles, and the tense atmosphere that had been generated before kick-off was rewarded with a lightning start from both sides.

For Forest, Joe Lolley tested the opposing backline within seconds with an enterprising run, while Derby perhaps should have taken the lead after five minutes when Lawrence struck the palms of Brice Samba following Chris Martin's unselfish lay-off.

A heavy challenge from Ryan Yates on Matt Clarke forced the Rams defender off with injury, but the re-shuffle, that saw Krystian Bielik shift back from midfield to replace him, could do little to prevent Sammy Ameobi forcing two smart saves from Kelle Roos.

The hosts turned the screw after the restart and moments after Ameobi had sent another teasing shot over the bar, they finally took the lead in incredibly fortuitous circumstances.

Centre-back Curtis Davies spread the ball out to Bogle on the right, but as he nonchalantly played the ball into a central spot for a team-mate to clear, the pass came up short and allowed Grabban to illustrate his deadly prowess as he tucked the ball into the bottom-left corner.

Samba was called into action to deny Jack Marriott later on, before Cocu sent on Martyn Waghorn as a last-ditch attempt to force an equaliser and his introduction almost proved a masterstroke, though Martin was left red-faced as a header into his path struck his left boot as he swung to connect with the right.

Nottingham Forest's Sabri Lamouchi: "Of course, it's a great [birthday] gift. It was an emotional game and for that reason, maybe the first half wasn't the best.

"The second half was much better. They made a big mistake and our striker, Grabbs, played a fantastic game one more time with great finishing, like killer finishing. That is what we wanted to see from him."

Derby's Phillip Cocu: "In the big games, in many games but especially in games like this, a detail, a mistake, bad judgement or sometimes class can make the difference. Today, the mistake of Jayden cost us the result.

"That is tough because I think we played quite a good game. We had good presence and played good football over a large part of the game. We created a good few opportunities, and deserved more than a 1-0 loss."

While Forest didn't have too many clear-cut chances of their own, Derby perhaps edged the game in that respect and the ever-present Joe Worrall produced a performances to match. He helped to keep a lively Tom Lawrence at while, while quietening Chris Martin's hold-up play too.

⭐️@NFFC's Joe Worrall is today's man of the match ⭐️

🥇Most clearances (7)
🥇Joint most blocks (2)
🥇Only Forest player to play every min in @SkyBetChamp this season (1350)@NFFC won last 3⃣ meetings v Derby and retain the Brian Clough Trophy pic.twitter.com/Q60VFzc68P

After the final international break of 2019, Nottingham Forest travel to Ashton Gate to face Bristol City on Saturday November 23, while Derby host Preston the same afternoon. Both fixtures get underway at 3pm.