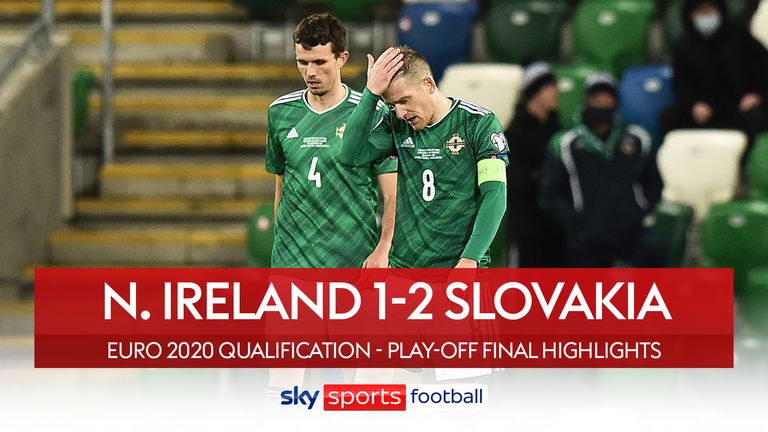 Highlights of the European Championship Qualifying Path B play-off final between Northern Ireland and Slovakia.

Northern Ireland's Euro 2020 dreams fell at the final hurdle as Michal Duris' extra-time winner sent Slovakia to next summer's finals with a 2-1 win at Windsor Park.

Man of the match: Juraj Kucka

How Northern Ireland went so close, yet so far

Northern Ireland have not started games well under Ian Baraclough - they were yet to score the first goal in a game under him - but in front of just over 1,000 home fans, they began at a good tempo.

Unable to turn their territory into opportunities, however, Slovakia grew in confidence and increasingly began to cause problems on the flanks. But their goal would owe little to quality, with a mistimed backwards header from Saville pounced on by Kucka, who strode forward to beat Peacock-Farrell.

Josh Magennis should have tested Rodak with a free header from Paddy McNair's corner minutes later but misjudged his effort. Only moments before the break, they threatened again, with Stuart Dallas and Niall McGinn both missing the target with wayward efforts in quick succession.

As has become increasingly familiar, the only similarity between Northern Ireland's first and second-half performances was the numbers on their backs - and in harrying and pressing their visitors from the restart, they looked a different prospect altogether.

Eight minutes into the second period, Stanislav Lobotka became a victim of the hosts' newfound threat, and from McGinn's interception, Conor Washington turned in the box before shooting straight at Rodak when he should have levelled.

But real chances remained at a premium after that near-miss, including the hosts' equaliser when it finally came, three minutes from time. McNair found space on the right flank and after reaching the byline pulled the ball to a long queue of players in the six-yard box. However, it took only first man Skriniar to clumsily divert the ball past his own goalkeeper and bring them level.

Into extra-time, the game went with Northern Ireland finally enjoying the bit between their teeth, and influential substitute Kyle Lafferty coming close to capping his superb cameo with a goal when glancing McNair's volley goalwards, but straight at Rodak.

At the other end, with the experienced Craig Cathcart forced off through injury, Tom Flanagan's decision to step into midfield left the hosts' backline exposed. Kucka's ball towards Duris deflected off Evans' unwitting backside and into the Slovakia forward, who kept his composure to beat Peacock-Farrell's weak dive at his near post.

Evans nearly made amends with one of the final kicks of the game when Jordan Thompson's glorious cross found him unmarked six yards out. But just as Rodak kept out his poor header with ease, so too did Slovakia see off any hopes of another late fightback to qualify for only their second European Championships finals. 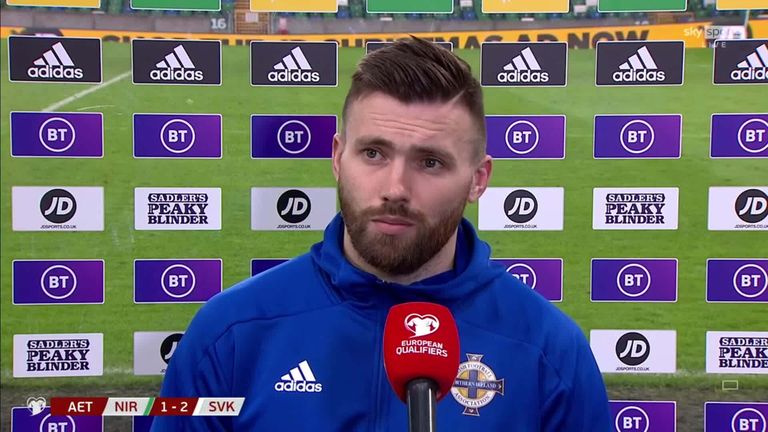 Stuart Dallas says the Northern Ireland players gave their all but it ultimately was not enough in their Euro 2020 play-off defeat to Slovakia.

Northern Ireland manager Ian Baraclough told Sky Sports: "There's not a great deal you can say. We gave everything, we couldn't have asked for any more effort. The game plan was to put them under as much pressure as possible, put the ball in the box as much as possible, I think we did that. 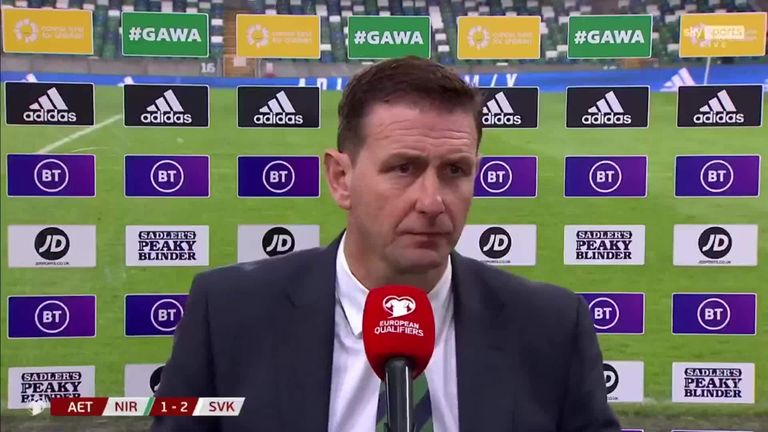 Ian Baraclough insists he could not ask his side to give any more and that there are no words capable of consoling them after Northern Ireland’s 2-1 defeat to Slovakia means they miss out on a place at Euro 2020.

"I'm sure people will pick out certain things, but that's the worst I've felt after a game, for sure. For a group of players who are so good to work with, a credit to themselves and families, and never know when to lay down and die.

"That happened tonight. For me it's tough to come up with any words of consolation."

Northern Ireland have a Nations League double header against Austria and Romania coming up before the international break concludes, with both live on Sky Sports.