Match report as Newcastle's wait for a domestic trophy goes on; City to play Arsenal in Wembley semi-final

Kevin De Bruyne and Raheem Sterling booked Manchester City's place in the last four of the FA Cup with a 2-0 win at Newcastle.

Pep Guardiola's side may have surrendered the Premier League title to Liverpool but there was no feeling sorry for themselves on show as they kept hopes alive of a cup treble in the form of the FA Cup, Champions League and the Carabao Cup, which they've already won.

In an utterly dominant first-half performance, De Bruyne stroked City ahead from the penalty spot (37) after Fabian Schar had pushed over Gabriel Jesus. A negative Newcastle rarely ventured out of their half but really should have equalised when Dwight Gayle somehow missed the target when presented with an open goal (66). Just two minutes later, Sterling punished that howler by curling home a delightful effort into the far corner (68).

Guardiola's side will now play Arsenal on the weekend of 18/19 July at Wembley for a place in the final.

How City cantered past Newcastle...

With a chance to end a 65-year wait for a domestic trophy, the current restrictions with no fans in attendance at St James' Park was unfortunate for the hosts as they didn't have the added edge of the home atmosphere.

And City were straight into their stride.

With De Bruyne, Sterling, Riyad Mahrez and David Silva floating into pockets of space, City pressed the Magpies into their own box.

Mahrez curled over the crossbar from 15 yards before Gabriel Jesus was just inches from opening the scoring when he instinctively stabbed Kyle Walker's cross just past the post.

The pressure was non-stop as Newcastle's midfield didn't carry to quality on the ball to provide any service into Andy Carroll.

Sterling's quick change of pace and effort from 18 yards was parried clear by Karl Darlow but there an inevitability about City opening the scoring. Newcastle finally wilted eight-minutes before the break and it was heavily self-inflicted.

A cross from the right wasn't a dangerous one but Schar got too tight to Jesus and pushed him to the ground with two hands. De Bruyne swept home the penalty kick with the minimum of fuss.

Aymeric Laporte headed just wide in stoppage time as Newcastle were lucky to get in at the break just one goal down.

Steve Bruce changed the shape of his team at the break with a switch to a back four and it gave City more to think about defensively with Allan Saint-Maximin now finding areas to test the City full-backs.

And Gayle should have equalised within two minutes of replacing Carroll.

Saint-Maximin took advantage of a poor pass by Nicolas Otamendi and he found the required quality to drill a cross to Gayle, who was only six yards out with the goal gaping, but he skied the effort over the crossbar.

About 90 seconds later, Newcastle were out of the cup.

Substitute Phil Foden picked out Sterling and he cut inside before curling a shot beyond Darlow and into the bottom corner.

The 12-match goal drought pre-lockdown is now a thing of the past - this was his second goal in his last three matches.

Sterling has returned from the enforced break full of energy, bite and a lethal touch in front of goal. His interchanging with David Silva, Jesus and Mahrez at times in the first half was mesmerising as the game became an attack vs defence exercise for the majority.

Saying that, it was still only a one-goal advantage before Sterling stepped up and delivered the excellent and decisive second goal. A goal which was Sterling's first goal from outside the box since November 2018 against Shakhtar Donetsk in the Champions League.

Newcastle boss Steve Bruce said: "When you're playing against teams like this, you can't make the type of mistake we have done for the penalty. Unfortunately, we gave a poor, poor penalty away and it's difficult enough because of the ability they've got.

"In the second half, we were much better and brighter, and the big turning point - could we have made it a really good cup tie had we equalised?

"Who knows whether we would have been able to go on from there, but we were certainly better in the second half." 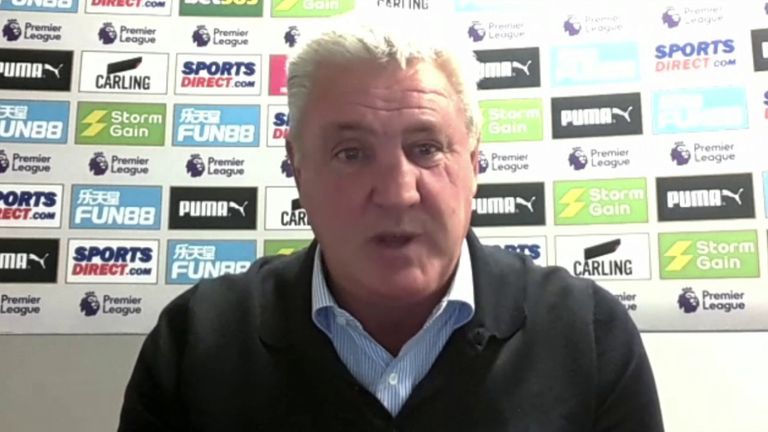 Manchester City boss Guardiola said: "We are delighted after the defeat against Chelsea to be in London again at Wembley to play against Arsenal in the semi-final to try to reach the final of the FA Cup.

"Always it's an incredible trophy and it gives us an extra bonus. We spoke after what happened in the Premier League - we need two more victories to qualify for Champions League.

"But we have two competitions we can win. We made the first step today. It will be good to arrive against Real Madrid in the best condition.

"To win this title would be the best way to prepare for Madrid."