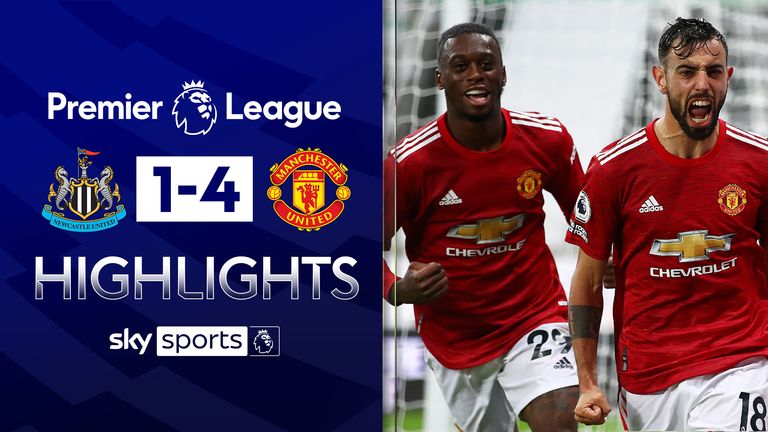 Highlights from Manchester United's win over Newcastle in the Premier League.

Bruno Fernandes made amends for a missed penalty with a spectacular late strike that inspired Manchester United to a 4-1 victory at Newcastle.

A stunning save from goalkeeper Karl Darlow saw Fernandes miss his first penalty in Manchester United colours at the 11th attempt, as Ole Gunnar Solskjaer's side looked destined for a draw after Harry Maguire's header had cancelled out Luke Shaw's second-minute own goal at St. James' Park.

But a dominant Manchester United claimed an emphatic victory when Fernandes rifled into the top corner with five minutes remaining, Aaron Wan-Bissaka thumped in his first senior goal and Marcus Rashford's stoppage-time fourth sealed a deserved three points on Tyneside.

Manchester United climb to 14th in the Premier League on six points after their second victory of the season, a point and three places behind Newcastle in 11th.

Man of the Match: Harry Maguire.

How Man Utd roared back in style

Solskjaer demanded a response from Manchester United in their first outing since the 6-1 thrashing at the hands of Tottenham. What he got was a nightmare start, as Shaw deflected Emil Krafth's cross past the wrong-footed David de Gea to hand Newcastle the lead inside two minutes.

Manchester United regrouped well after registering their fifth Premier League own goal against Newcastle, and the visitors looked to have restored parity on 19 minutes when Fernandes picked out the top corner following a neat exchange with Juan Mata.

A routine VAR review found Mata had strayed into an offside position in the build-up and the equaliser was chalked off, but Manchester United didn't have to wait much longer to draw themselves level.

Mata was the architect again, this time picking out Maguire from a corner as the Manchester United captain hauled his side level and drew a line under a challenging week with a towering header into the bottom corner.

Allan Saint-Maximin drew De Gea into action with a near-post drive, and the Spaniard produced an even better stop early in the second half to deny Callum Wilson, clawing the forward's effort off the line as he tried to turn Saint-Maximin's cross home on the stretch.

VAR denied Manchester United an equaliser in the first period, but the technology handed them a chance to take the lead for the first time on 58 minutes, as Jamal Lewis was penalised for a challenge on Rashford after referee Craig Pawson consulted the pitchside monitor.

Up stepped Fernandes but, after an orthodox run-up, his firmly-hit spot-kick was brilliantly palmed away by Darlow.

Maguire had a header cleared off the line by Jonjo Shelvey from the resulting corner. With the exception of a Shelvey 20-yard drive, all that stood between the dominant visitors and the lead with the inspired Darlow, who produced a string of saves.

It looked only a matter of time before United made the breakthrough, and the pressure eventually told in a final five-minute flurry.

Fernandes rattled a stunning effort in off the post after linking up with Rashford in the final third, Wan-Bissaka rifled an emphatic drive home at the near post and Rashford wrapped things up with a fourth on the counter in stoppage-time. 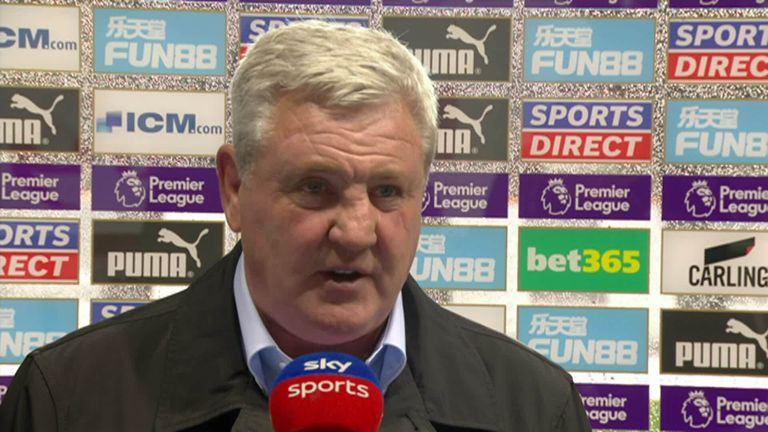 Steve Bruce says he was disappointed in his Newcastle sides 4-1 loss as they conceded three times late on to lose to Manchester United after leading 1-0.

Newcastle boss Steve Bruce: "We were beaten by the better team. The disappointment was we were naïve in the end. Callum Wilson had a big chance, but De Gea pulls off a wonder save. It might have been a bit different.

"The disappointment was that we conceded four in the end, we left wide open spaces in behind us as we know that is you do that against top players it becomes very difficult." 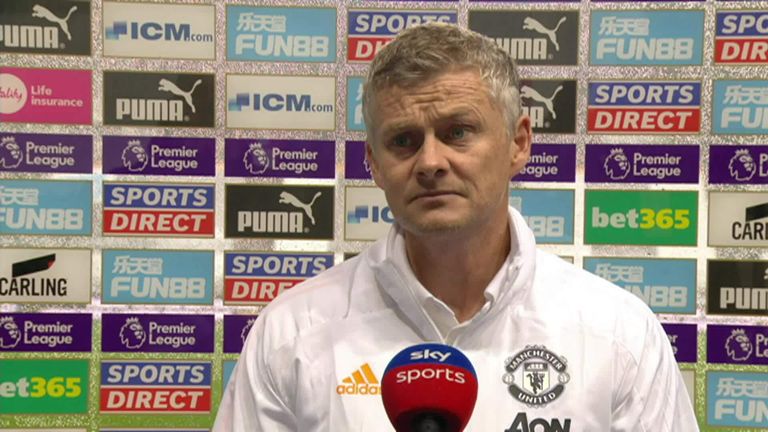 "The boys came together really well. They are looking forward to every game. Today I rested a few and they have come on and done the business for us.

"Harry scored and led by example. He showed good character, I am happy for him. He had a couple of difficult weeks since he last played for us.

"The season started for us today. We have come up to the speed of the game and that showed today."