Petr Cech on brush with death at Reading: It was a very close call

Pat Davison meets Petr Cech to discuss the harrowing time 10 years ago when his life hung in the balance following a head injury in a match at Reading - and the fortunate circumstances that mean he's here to tell the tale...

A decade ago this week, Petr Cech returned home. Back to his wife and dog, away from the focus of the 'whole world'.

Only 10 days earlier, because of an injury suffered on a Premier League pitch, his life hung in the balance.

I'm not sure I knew that.

I remember the incident, of course. Saturday, October 14, 2006, Chelsea away at Reading. Just seconds in and Cech slides in bravely to collect the ball at the feet of Stephen Hunt, who makes a challenge he has always said was unintentional but which saw his knee make contact with the goalkeeper's head.

I remember the controversy that surrounded that challenge. I recall some of the post-match comments and the headlines from what became a huge global story. But until I sat down with Cech this week and heard him talk of the harrowing minutes, hours and days that followed the challenge, moments he hasn't discussed too often, I'm not sure I really realised how touch-and-go it was.

"Things could have been different," says the man who has since gone on to take his place among the league's greatest ever goalkeepers.

"The doctors tried not to scare me too much and I never asked too much.

"But if you ask my wife, even now, she does not look too well. For her, the experience was a thousand times worse than it was for me.

"It was a very close call."

Cech managed to crawl from the pitch himself but it was almost immediately clear he couldn't continue. He was stretchered down the tunnel, where he deteriorated further.

"I lost consciousness, then I came round again. Some people, they did not like me too much because I was confused and sometimes when you're confused you try to fight!"

He says this last bit with a smile, he can't remember what happened in the tunnel. In fact, after the coin toss and handshakes at the start of the game, he can't remember anything for the next three days. He says it helps. These aren't his own painful recollections, other people have helped him fill in the gaps.

It was the then-Chelsea doctor, Bryan English, who realised the seriousness of Cech's condition.

It was at a specialist unit in nearby Oxford - thanks to emergency surgery at 1am - that the goalkeeper's life was saved.

Cech believes that if the incident had happened at another ground, further from that hospital, he probably wouldn't have made it.

"The decisions of Bryan and the medical staff and the proximity of Oxford - that's the combination that gave me a chance.

"I had a depressed skull fracture. A few pieces of bone went in quite deep, that was the biggest danger.

"The more they go in, the left side of the brain (where Cech was injured) is quite an important centre of movement. Anything could happen."

Two metal plates were fitted. The days he can't remember followed but gradually he did begin to recover. In terms of his career, Cech was told, at the very least, to forget the rest of the season. But just three months after his life-threatening injuries, he returned.

"I have to say a lot of people did not want me to return a quickly as I did. It was my decision and my will to come back to what I was used to doing and what I love," he says.

"Once the surgeon said the skull is strong enough with the helmet on, I decided to return to training with the team.

"Two days later, we travelled to Liverpool - which I did not tell my wife at the start, I told her I'm just travelling with the team. 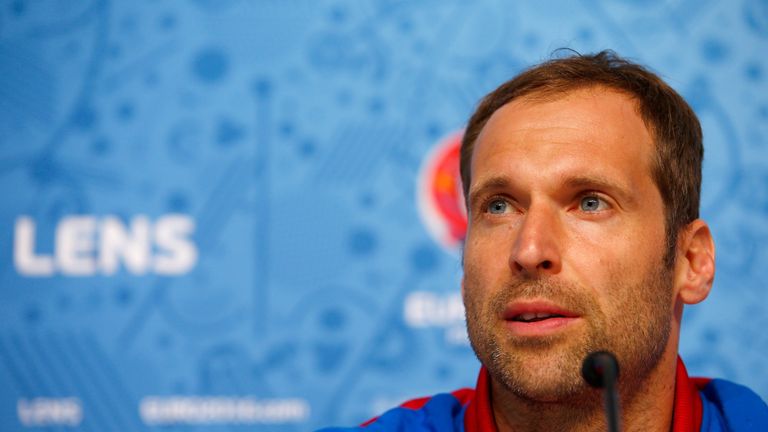 The decisions of Bryan and the medical staff and the proximity of Oxford - that's the combination that gave me a chance.

"But the manager said to me, 'You want to go to watch or you want to play? You tell me.'

There were times when people questioned whether he'd be the same goalkeeper again. They took the headgear as evidence of fear. But, as he puts it: "How can I be afraid when I can't remember anything?"

Cech has won two Premier Leagues, four FA Cups and a Champions League since the injury. To this day, he remains among the very best.

As for the Premier League, it changed for the better in the aftermath of what happened to Cech. Initially his treatment at the stadium was shrouded in controversy, with differing claims over when an ambulance was called and how long it took to arrive.

But it led to the league having another look at how ready it was for a worst-case scenario.

A tightening of regulations means every club is now obliged to have a doctor in the dugout, there must be two paramedics on the sidelines and an ambulance on standby at each stadium. The changes may have already saved a life.

"As human beings, we always need something to happen to improve," says Cech.

"If you look at the Fabrice Muamba case, this is what helped save his life - the paramedics are there.

"If they have to come from the hospital, even one that's close, he would not be here."

On and off the pitch, Petr Cech has made a huge contribution to this league. We're lucky to have him.