Pep Guardiola believes Phil Foden is good enough to star for Manchester City for the next decade after he marked his first start of the season with a man-of-the-match display to see off Oxford in the Carabao Cup.

One of 10 changes for the holders at the Kassam Stadium, 18-year-old Foden shone above David Silva, Gabriel Jesus and Riyad Mahrez as City ran out 3-0 winners.

He played a part in the opening two goals, a Jesus header and a well-taken strike from Mahrez, before wrapping up the win with a fine finish of his own – his first senior goal – in the closing stages.

There have been plenty of calls for the England U19 international to be more involved in the first team but Guardiola – handing Foden his first start since the Community Shield – was pleased with what he saw. 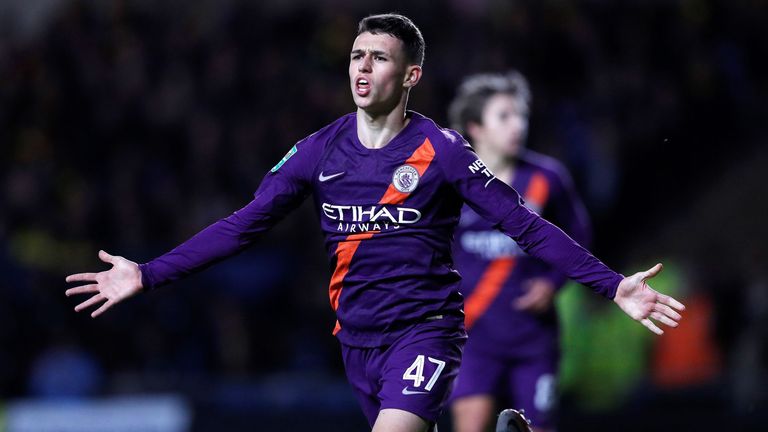 “The way he celebrated his first goal was like the final off the World Cup and that is because he is a City fan,” he said.

“My dream is for him to stay 10 years and if Phil stays for 10 years, he can – in the next decade – play regularly and after [that] I don’t know what is going to happen with him.”

Oxford boss Karl Robinson likened Foden to former Barcelona midfielder Andreas Iniesta, although Guardiola was keen not to make comparison with one of his previous players.

“Wow. These are big, big words. I have said many times we are delighted with Phil,” Guardiola said of Robinson’s comparison.

“I am not going to say he is going to become Andres Iniesta because it puts pressure on him. Iniesta is by far one of the best players I ever saw in my life so we cannot put the pressure on Phil.

“But he has the quality to stay here for 10 years because I think he wants to stay, I think the club wants him to. But step by step, he needs to play regularly, but I think he has all the skills to play with us.”

Robinson was suitably impressed enough by Foden’s display to draw parallels with four-time Champions League winner Iniesta and made a plea for clubs to hold on to talented, smaller players.

“We planned to press, and after three-and-a-half minutes, we had three of ours pressed on that one player. I think I blinked, the next thing he was through them,” he said.

“His ability, his orientation of himself on the football is genius. These are things when you’re working with young players, that you find that only very few coaching sessions can really bring that out. There’s a naturalness to that and it’s something I’ve not seen for a long time." He added: “You’d almost put him in the same bracket as when you see…I remember seeing Barcelona live and seeing Iniesta playing in those sort of positions. He’s almost like that. He’s small.

“So please academies, don’t release small talented players. There’s a home for them in our country. We can grow them, we can develop them, we can aid them.”