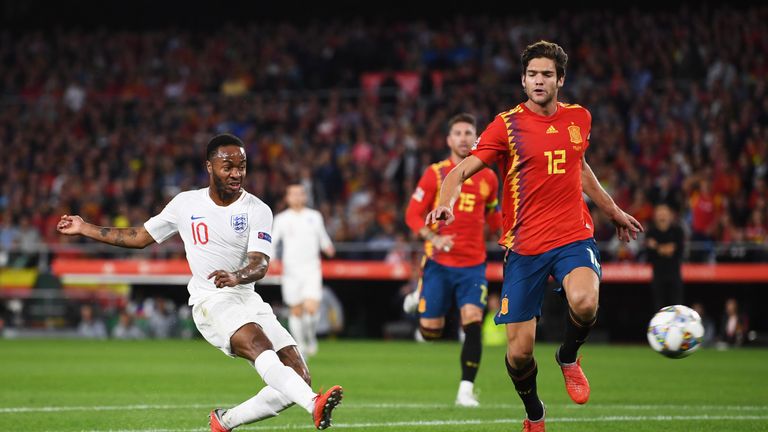 Highlights of England's historic 3-2 win against Spain at the Estadio Benito Villamarin.

Sterling rifled England into the lead on 16 minutes - his first international goal since October 2015 - and rounded off a stunning first-half display with another seven minutes before half-time.

Marcus Rashford's sixth international goal was sandwiched in between Sterling's two strikes as the Manchester United forward atoned for his pair of missed chances in Friday's goalless draw in Croatia in style.

Spain pulled a goal back through substitute Paco Alcacer on 57 minutes and netted again through Sergio Ramos with the final touch of the match, but a resolute defensive display secured England's first victory in Spain since 1987.

Torrential rain soaked Seville in the build-up to kick-off but the typically English conditions were not favourable to the visitors, who were fortunate not to concede in a blistering opening five-minute spell from Spain.

Two corners in quick succession nearly yielded the early goal the baying home crowd wanted as a near-post flick found Chelsea defender Marcos Alonso at the back post, but Jordan Pickford was on hand with a sprawling save from point-blank range.

England weathered that early storm, though, and took the lead on 16 minutes as Rashford's incisive pass released Sterling, who rifled his first international goal on foreign soil into the top corner of David de Gea's goal.

Marco Asensio blazed a shot over as Spain looked for an immediate response, but their desperation to restore parity proved their undoing as England got their second on the counter just before the half-hour mark.

On receiving a long pass from Pickford, Harry Kane cleverly held up play before playing Rashford through on goal, and the forward, unlike in Croatia, kept his composure to slot home beyond his Manchester United team-mate De Gea.

Two became three on 38 minutes as Ross Barkley lofted a wonderful ball over the top for Kane, who unselfishly squared for Sterling to convert as Spain conceded three goals in a home competitive match for the very first time.

England made three changes from their draw with Croatia as Trippier, Gomez and Winks replaced Walker, Stones and Henderson.

Jonny made his Spain debut while Rodrigo started up front ahead of Morata and Alcacer.

Sterling's first international double left Spain stunned, but they returned from the interval with a point to prove, laying siege to the England goal.

After Saul Niguez had blazed a shot over, a deflected Asensio effort nestled in the side-netting. But the hosts were not to be denied much longer as a glancing header from substitute Alcacer, a minute after coming on, reduced the deficit.

The greatest threat to England's lead came from within as Pickford was caught on the ball by Rodrigo on 63 minutes, and only a last-gasp tackle from the goalkeeper prevented Spain from reducing the arrears further.

A long-range Asensio shot that whistled past Pickford's goal was the closest Spain came to a second until Ramos powered a header home in the seventh minute of injury.

But the referee brought a thrilling match to an end before the Spanish fans had the chance to finish their celebrations as the final whistle confirmed a night to remember for English football.

"They should be incredibly proud of their performance.

"We spoke to the forward players in particular before the game to remind them what a threat they are. The three of them were outstanding and caused all kinds of problems. Then it was for the rest of the team to provide and be brave enough and I thought at times we did that really well." 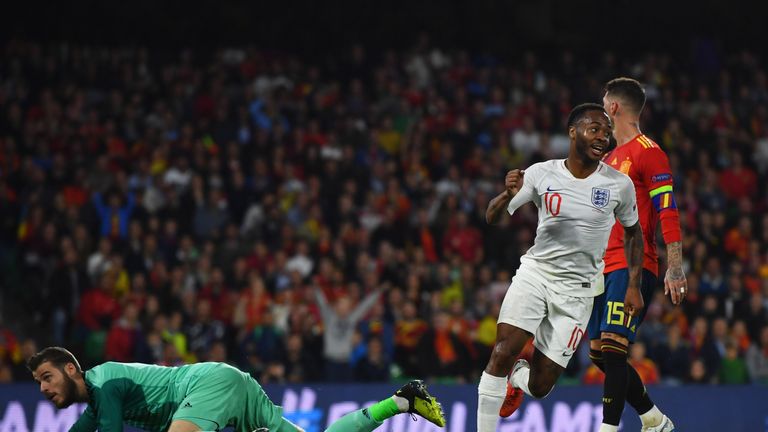 "Like every game there are positives to take and I'll take the positives from the second half.

"The result was exaggerated but fair, they deserved to win. Luck comes into play, that didn't help us.

"England are a fantastic team, our Nations League group is very difficult. But we have still got one more game, we have to win to qualify and that's the best news because we depend on ourselves."

England host USA on November 15 before finishing their UEFA Nations League campaign with a home game against Croatia on November 18. Spain might have top spot in the group wrapped up by then as they travel to Croatia for their final group game on November 15.