St Margaret's Old Boys secretary invites Sky Sports News cameras to spend matchday at his club; "I feel that coming out is an important subject to share, and to talk about"

By Alan Myers with Jon Holmes 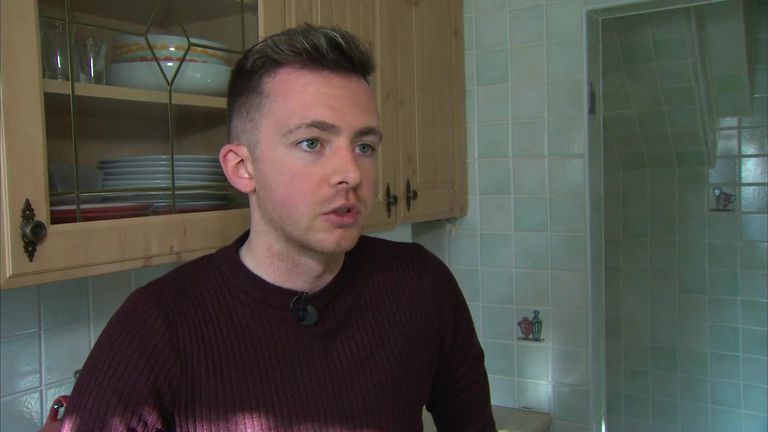 Football coach Greg McLean of St Margaret's Old Boys FC in Liverpool talks to Sky Sports News about his coming out story, and the impact it had on enjoying the sport he loves

Football coach Greg McLean explains why he wanted to share his experiences of coming out as gay at his club in Liverpool.

Greg is a football coach and the club secretary of St Margaret's Old Boys, based in Aigburth in Liverpool. He helped set up the team - now an FA Charter Standard club - alongside his dad, and was also their manager until he walked away from the role he loved in summer 2015. He didn't tell the players exactly why, only that he wasn't in the right place at the time to concentrate on the role.

A few months later, he texted each player individually and explained to them that he'd been struggling with his sexuality and the coming out process at the time, and wasn't sure that they'd be comfortable with that or playing under an openly gay manager. Every player texted back to tell him that his fears were unfounded, and that he'd be welcome to return to the club when he was ready - something he did soon after.

Inspired by the positivity of the Rainbow Laces campaign, Greg was keen to share his story of inclusion and invited Sky Sports News to spend the day with him and St Margaret's last Saturday. Here, speaking exclusively to Sky Sports, he discusses his reasons for wanting to talk openly with the media about his experiences...

I was thinking it had been three years since I came out. I wanted to help other people who might be in the same situation as me, knowing it was the time of the Rainbow Laces campaign period too. I feel it's an important subject to share and to talk about - even if my story resonates deeply with just one person, it's worth doing. But I've already had so many messages that I know it's gone much further than that.

I put out a post on Twitter to say that I was happy to be open about my experience of coming out in football. Various people got in touch with me, including media organisations and also my county Football Association here in Liverpool. They've since shared my story on their website, and it's been published on the main FA website too. Lots of people have said that the background of my situation has really hit home for them too.

3 years on from the most important day in my life, when I came out as a gay man to my family; it has made me stronger as a person, revealed who my true friends are & allowed me to develop as a person. It’s worth stepping out of the closet #LGBT #Gay #Proud #Football #GayUK pic.twitter.com/ApacCqc3Rn

There's still a feeling of isolation for many young people who are gay and bisexual, and that can happen even if you're in a healthy environment. Sharing your story more publicly can also make you worry that you could be exposed to abuse or public ridicule. We just need to educate each other more. The support I've had from the football community, and the understanding from the LGBT community, will hopefully allay a lot of those fears that anyone else might have about doing the same thing.

A young person listening to their favourite player say something positive about the Rainbow Laces campaign could mean the world to them.

More needs to be done in the school environment, and on the education side. It's crucial because there are young people who are struggling as they come to terms with who they are. As you're growing up, you don't have that life knowledge yet and if you haven't been introduced to LGBT on the curriculum, even by way of some simple facts and explanations, you're not going to know how to handle what's actually a normal part of adolescence for so many.

For me, my manager at work was my biggest ally. I was the sixth form careers manager at the school from which I'd graduated a few years before. Geoff was the head of sixth form. He could tell I was dealing with something, but he didn't know what it was. At that stage, I wasn't even comfortable in saying the word 'gay'. He didn't put me under any pressure; he just listened and was patient. When I was ready, I told him what I was going through. It's what friendship is all about.

If you can see someone is feeling down, and not their usual self, it could be they're going through something similar. It does impact on your mental health - you can have good days and bad days. It's just a question of being sensitive to that and being there for that person. Try to see things from their perspective. There's definitely a connection there with what it means to be a team-mate in sport.

Grassroots football is impacted heavily by professional football, so it is important for the game to support Rainbow Laces. A young person listening to their favourite player say something positive about the campaign could mean the world to them. That could be the player simply saying in an interview that it would be no problem to have a team-mate who was gay or bi.

There was an article in a French newspaper last week where Olivier Giroud used the word "impossible" when asked about a pro footballer coming out. I'm sure he meant well and was trying to be an ally, but I think it was the wrong word to use. Perhaps it was lost in translation. We're in a much better position for that to potentially happen than we were even five years ago. A small amount of people's views will never change when it comes to LGBT inclusion but surely we agree that it could never be right for someone to walk away from a sport entirely just so they can feel able to be truly themselves. That's not right.

Sky Sports is a member of TeamPride and supports Stonewall's Rainbow Laces campaign, which is currently receiving its annual activation across British sport until December 7.