Cardiff City's Emiliano Sala was on board missing plane

Cardiff City striker Emiliano Sala was on board an aircraft which went missing near the Channel Islands on Monday evening.

The French civil aviation authority confirmed to Sky Sports News that Sala was aboard the "single turbine engine aircraft", which disappeared from radar off the coast of the island of Guernsey.

Local air traffic control said the aircraft was travelling from Nantes in western France to Cardiff when it went missing.

Sky Sports News understands Cardiff were expecting their new £18m signing to travel back to south Wales on Monday night.

Cardiff chairman Mehmet Dalman said: "We are very concerned by the latest news that a light aircraft lost contact over the Channel last night. 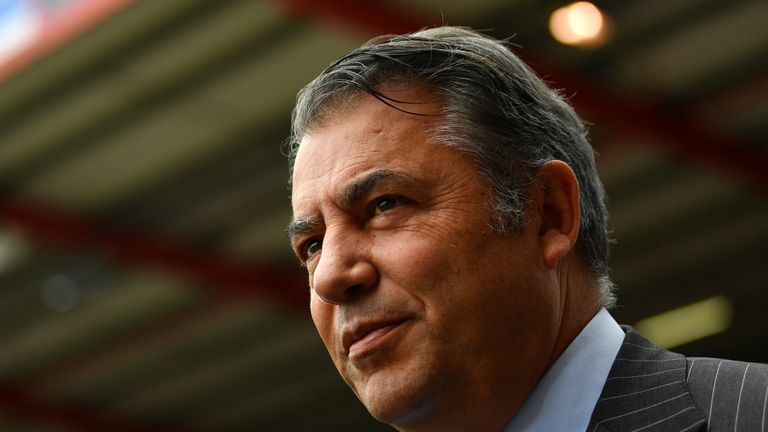 We are awaiting confirmation before we can say anything further. We are very concerned for the safety of Emiliano Sala.

"We are awaiting confirmation before we can say anything further. We are very concerned for the safety of Emiliano Sala."

Authorities say the Piper Malibu aircraft disappeared from radar near the Casquets lighthouse at about 8:30pm on Monday. As it passed Guernsey, the aircraft requested descent.

A search and rescue operation was launched and carried on until 2am on Tuesday, before being called off due to worsening weather conditions and later resuming at 8am.

Guernsey Police said on Tuesday afternoon "a number of floating objects have been seen in the water" following a 15-hour search, but they could not confirm whether any were from the missing aircraft.

The police said no signs of those on board have been detected, and added: "If they did land on the water, the chances of survival are at this stage, unfortunately, slim."

Guernsey Coastguard received an alert from Air Traffic Control at 20:23 on Monday night that a light aircraft had gone off their radar "approximately 15 miles north" of Guernsey, initiating a major search and rescue operation.

There are currently two planes, two helicopters and a lifeboat searching for the aircraft.

No trace has yet been found.

Conditions during the search last night were challenging, with wave heights of up to two metres, with heavy rain showers and poor visibility

Sala flew to Cardiff on Friday morning to undergo a medical, which was completed at around 5pm. He passed it, but it was too late for him to be involved against Newcastle on Saturday.

The Argentine carried out press duties with Cardiff on Friday evening and posed for a picture holding a shirt with fans outside the stadium.

As he was not required to train with Cardiff until Tuesday, Sala flew back to Nantes to sort out his personal affairs and to say goodbye to his friends and team-mates.

Today the sea is much calmer, although visibility was good, it is now deteriorating.
UK authorities have been calling airfields on the south coast to see if it landed there. So far we have no confirmation it did.

Sala's most recent post on Twitter, at lunchtime on Monday, shows the Argentine - who became Cardiff's club-record signing - bidding farewell to his former team-mates at Nantes.

The striker was expected back in Cardiff on Monday night, ahead of training with his new club for the first time on Tuesday.

Cardiff executive director Ken Choo said in a statement: "We were very shocked upon hearing the news that the plane had gone missing.

"We expected Emiliano to arrive last night into Cardiff and today was due to be his first day with the team.

"Our owner, Tan Sri Vincent Tan, and chairman, Mehmet Dalman, are all very distressed about the situation.

"We made the decision first thing this morning to call off training with the thoughts of the squad, management staff and the entire Club with Emiliano and the pilot.

"All of us at Cardiff City FC would like to thank our fans, and the entire footballing family for their support at this difficult time. We continue to pray for positive news."

Nantes were due to travel to Entente Sannois for their Coupe de France clash on Wednesday evening, but Sannois, who play in the third tier of French football, have agreed to postpone the match.

In a statement, Nantes president Waldemar Kita said: "I'm thinking of his friends, his family, I'm still in hope, he's a fighter, it's not over.

"Maybe he's somewhere, waiting for some news that we hope will be positive. We are very touched by all the support received since this morning."