One occupant of the plane carrying Emiliano Sala is visible in the underwater wreckage, the Air Accidents Investigation Branch has said.

The Piper Malibu, which had been carrying the Cardiff striker and pilot David Ibbotson, was found at the bottom of the English Channel on Sunday morning.

The AAIB, who are working in coordination with Blue Water Recoveries Ltd, identified what they called an object of interest on Sunday.

A remotely operated vehicle [ROV] was dispatched to survey the area of seabed in which the object was located.

The ROV footage was then analysed by AAIB investigators, who concluded the object was in fact the wreckage of the plane that had been carrying Sala.

The AAIB have now released the first pictures of the plane wreckage, which shows the rear left side of the fuselage, as well as part of the aircraft's registration. The body found in the wreckage has not been identified.

The AAIB say they are now considering the next steps that should be taken, in consultation with the families of Sala and Ibbotson, as well as the police.

The aircraft disappeared on January 21 when flying Sala from Nantes to Cardiff, just days after he had completed a club-record transfer to the Premier League side. 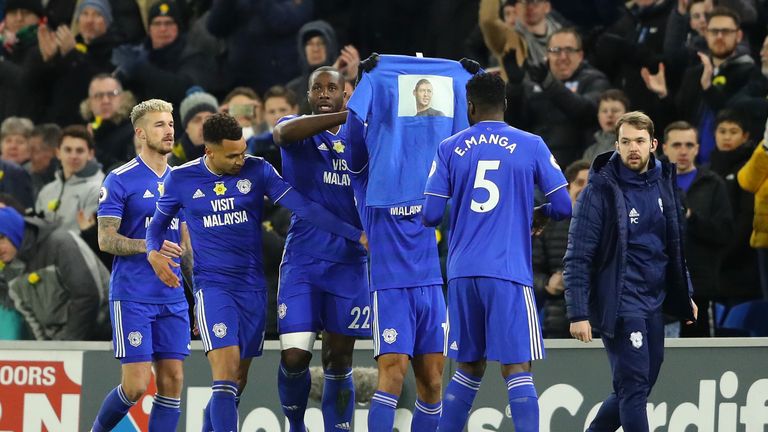 Tributes were paid to Emiliano Sala before kick-off at the Cardiff City Stadium and goalscorer Bobby Reid celebrated his opener by holding up a shirt with a picture of Sala on it.

Authorities halted the search three days later, saying the chances of survival for those on board was extremely low.

A GoFundMe page was then set up to pay for a privately-funded search, which has now resulted in the discovery of the plane.

Following the discovery of the wreckage, Sala's father Horacio told Argentinian broadcaster Cronica TV: "I cannot believe it. This is a dream. A bad dream. I am desperate.

"I communicated with them every day, but since I do not have WhatsApp it's hard to call them or call me.

"They told me that the days passed and there was no news of Emiliano or the plane."