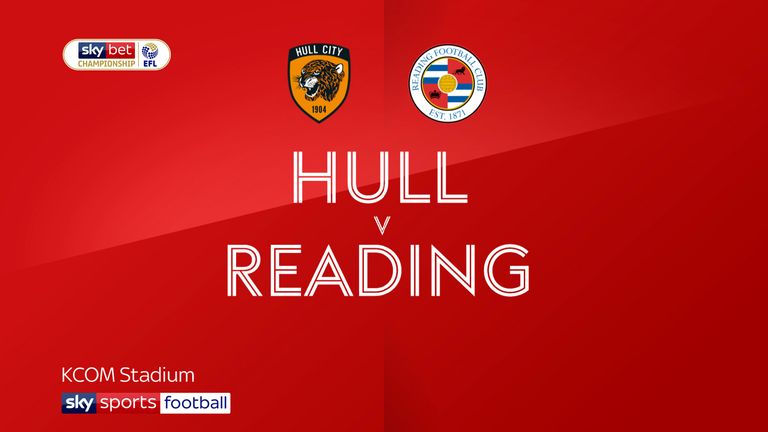 Highlights of the Sky Bet Championship match between Hull and Reading

Grant McCann celebrated his first win as Hull manager after his side dug deep and rode their luck against Reading.

Both sides tasted defeat in the opening weekend of the Sky Bet Championship season and City's slick start on Saturday proved the difference at the sparsely-filled KCOM Stadium.

Jarrod Bowen followed his early opener with a fine assist for Jackson Irvine, only for debutant Lucas Joao to pull one back as improving Reading pushed and just lost 2-1.

Record signing George Puscas proved a thorn in the side after his half-time introduction and rattled the crossbar late on, but Jose Gomes' big-spending Royals were made to pay for a lacklustre start.

New boy Joao hit the post in the first half and then found the net as Reading bossed the second half without managing to eke out a leveller.

It was a ragged end to a match that Hull had started so brightly, with Bowen notching after good work by Grosicki and some dodgy goalkeeping.

McCann's men saw penalty appeals for handball rejected as they kept their foot on the visitors' throat, adding a second in the 16th minute as Bowen cut back and flung over a fine cross that was met by a powerful Irvine header home.

Joao hit the post in a rare moment of danger soon after, but City were playing with confidence and cohesion going forwards. Daniel Batty was looking dangerous in midfield and the ever-impressive Bowen saw an audacious attempt from distance denied.

Reading brought record signing Puscas on for his debut at half-time, while Yakou Meite came close to getting a telling cross on the end of a fine John Swift cross.

The 23-year-old also saw penalty claims rejected and prodded wide in a lively start to the second period, which included tempers fraying when Andy Yiadom appeared to catch Irvine when competing for a header. The Reading man got away with a booking.

Hull were now increasingly inviting on pressure and Joao reduced the deficit in the 66th minute by showing good composure before firing home. City were looking ragged and George Long did well to prevent Puscas levelling, with the goalkeeper producing another stunning stop unaware that the Romania international was offside.

Puscas rippled the side-netting as Reading continued to push for a leveller and the substitute rattled the crossbar from close range in the dying embers of the contest.

Bowen was easily the hosts' biggest threat and they just managed to see out the win.

Grant McCann: "I think my team showed both sides of us today. I thought first half we were excellent. I thought we showed how excellent we were in terms of our pressing, our energy, our appetite, the bite, creating chances. I think we probably could have been three or four nil up again.

"That's something that's going to come. I can feel it. The group believe in themselves more. The second half I thought we showed a real dogged and rugged performance to keep the win. They were always going to have a big reaction. They're a good team Reading."

Jose Gomes: "[We're] frustrated. But also, we know the reasons why this happened, the way that we start the game. The first half was completely different compared to the second, and a big difference between both parts was the spirit, the way that we fight.

"We didn't do it properly in the first half and in the second half we looked a completely different team. Actually, in the second half we created a lot of chances, we played better, we really dominate and we cannot forget that we have a lot of new signings and we need to be patient with them because some players just trained twice with us."