Jeff will be joined by his footballing friends such as David Moyes, Kammy and the Soccer Saturday crew during his journey 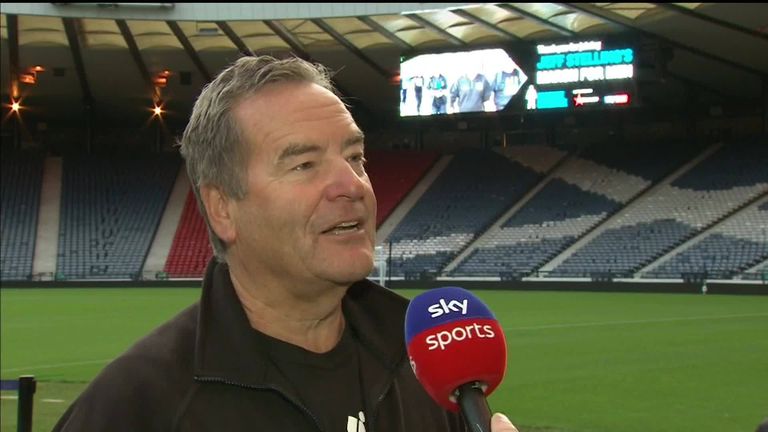 Soccer Saturday legend Jeff Stelling embarked on his 100-mile March for Men on Thursday to raise awareness and money for Prostate Cancer UK.

Jeff will take part in four marathons, in four countries, over four days - starting in Glasgow on Thursday, before travelling to Belfast, Cardiff and finishing in London on Sunday.

Thursday's route took Jeff from the Scottish national stadium Hampden Park to the grounds of Rangers, Celtic and Hamilton Academical before ending in Motherwell.

Before he began his endeavour, Jeff told Sky Sports News: "We are trying to raise awareness of a disease that kills one man every 45 minutes, every half of a football match. One in eight of us will contract prostate cancer at some point in our lives, which is a phenomenal figure.

"Men are reluctant to go to their GP about anything and if it's to do with anything below the waist they are not going anywhere near it. It's an attitude that we've got to try and change.

"We've done 25 marathons in the past to try and change that attitude and I think it is working. People have been very generous and they've given £800,000 over the last couple of years and we're hoping to get past the £1m this year."

Along the way, Stelling hopes to be joined by many of his friends within the footballing world and he set off with Malky Mackay and David Moyes on the first leg, with Charlie Nicholas joining later at Celtic Park.

Nicholas was meant to join up at the previous stop, Ibrox, but Jeff was not surprised he avoided the home of his former club Celtic's rivals.

He said: "Did you really expect him to turn up at Ibrox? Chicken Charlie - that's what we call him.

"He's in London and his flight has been delayed so he's trying to get here as soon as he possibly can. We're told surprise, surprise that it will probably be sometime shortly after we've left Ibrox."

Stelling will continue his 16-club trip on Friday when he visits Crusaders, Cliftonville, Glentoran and Linfield in Northern Ireland.