When Shaun Goater inspired Manchester City to a 3-1 win over Manchester United in November 2002, it was a cathartic experience for the club’s supporters.

Although City would have to wait another decade before lifting the Premier League title, a statement had been made. They have a winning record against United in the competition ever since that day.

Prior to Goater's two-goal heroics, however, it was a very different story for an entire generation of Manchester City fans. Indeed, they had to reach back another 13 years into the memory banks for the previous victory - but what a victory it was. 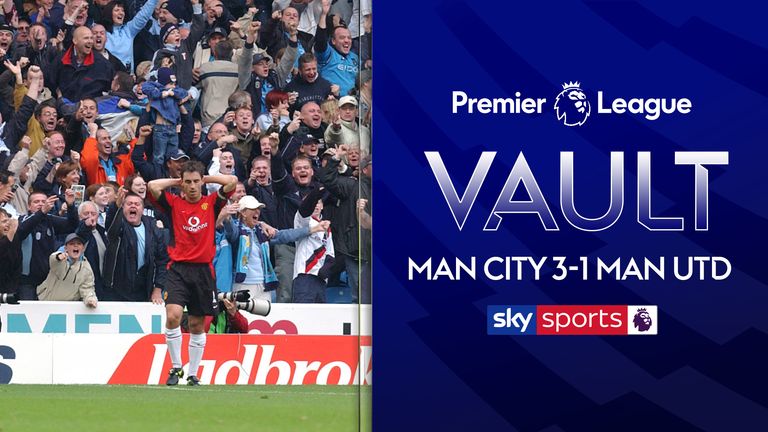 While the 2002 win at Maine Road proved to be a turning point, the spectacular 1989 triumph was notable in that it stood alone as a beacon, it's significance only growing in importance as the years passed by. A lament to potential lost and what might have been.

City won 5-1 that day. Sir Alex Ferguson once called it his most embarrassing result. Gary Pallister, then the most expensive defender in British football history, described it as the lowest point of his career.

And the game featured another two-goal hero in David Oldfield.

Thirty years on, it is still a source of immense pride. Oldfield's career went on to see him become a crowd favourite at Leicester and Luton, before having further spells with Stoke and Peterborough. He has been an academy coach at West Brom and MK Dons, an assistant to Jimmy Floyd Hasselbaink at Burton and QPR, and a caretaker manager at Oxford.

Now assistant at Stevenage, he is perhaps still most associated with a game that took place when he was just 21 years old at a club where he spent only the one year as a player.

"It definitely wasn't all me," Oldfield tells Sky Sports.

"For example, the second goal was all Paul Lake's work. He pulled the ball back and I managed to score from six yards. I was fortunate and I continue to be fortunate to be associated with that game because it proved to be such an important one for the club.

"I remember the day of the game and the week of the build-up to it. It was a big one and everybody knew it was a big one. That buzz around the place was definitely heightened.

"United had such a good team. They actually started strongly and we didn't start too well. Then there was a break in play and after that we were significantly better. We were more energetic and we managed to impose ourselves on the game. Paul Lake was very influential that day. Trevor Morley was a big player for us too.

"When you are a young lad you perhaps don't know what you've just done. Nobody realised it would be such a significant result."

Oldfield had arrived from his first spell at Luton six months earlier. He had the option of joining West Ham instead but something compelled him to make the move north.

"There was a particularly strong group of young players there at that time too. It was led by Paul Lake but there were others like David White, Andy Hinchcliffe, Steve Redmond and Ian Brightwell. They were really strong young players and that was the real draw for me to go and join that group. We were a young team full of hope and full of ambition going forward."

One of the great curiosities of the result, of course, is that Manchester City did not move forward. Meanwhile, the team they had just played off the park went on to dominate English football for much of the next two decades.

While Ferguson was able ride out the storm, famously dodging the sack just months later, and going on to win the FA Cup that season, City boss Mel Machin was removed from his own job just nine weeks after this iconic win. An exciting young team soon fell apart.

"Sir Alex was having some trouble at the time but it was Mel who left with Howard Kendall coming in," recalls Oldfield.

"The result was that it didn't quite happen for that group of players. Howard brought in quite a few of the players he already knew, ex-Everton boys like Peter Reid. I found myself on the way out to Leicester and Lakey picked up a really nasty injury.

"Howard had enjoyed success in the past so City did what they did and backed him. You do get these turnovers at big clubs but I remember feeling very disappointed that this young group hadn't had the chance to stay together longer because it was such a great club."

Oldfield has gone on to have success as a coach, winning promotion with Burton Albion alongside Hasselbaink. He is now enjoying his role at Stevenage where he is there to support Mark Sampson two days a week and on matchdays.

But he retains managerial ambitions of his own.

"I do want to be a manager," he says. "I enjoy trying to develop young players. My enthusiasm for being out on the grass is as strong as ever. I love being at the coal face. You just have to keep listening and learning."

Perhaps one day there will be a chance for Oldfield to take his own team to Manchester City. If that time does come, he can be certain of a warm welcome.

"I am fairly low key on social media but when I do hear things it is always the City fans," he says. "It is great to see where they are now. I have been back to the club a few times and whenever I go back there, the connection between the club and the supporters is still so strong. I am so impressed that they have maintained that.

"It is a brilliant club when it comes to incorporating the community and it has not lost that. It has progressed so far but retained the things that are important to the community.

"That is a shining example for all football clubs."