Pep Clotet on Jude Bellingham and turning the Titanic around

Pep Clotet is facing another busy week. After a brief trip to the German Christmas markets in Birmingham - "it was very, very cold" - he and his staff are preparing for two home games at St Andrew's that could lift the club into the play-off places if they are able to build on their win away to Reading at the weekend. It never stops in the Championship.

Clotet is enjoying the challenge at Birmingham City having developed a strong reputation within the game as a thoughtful coach full of enthusiasm, empathy and good ideas. He has always been happiest on the grass but recently found himself in the spotlight of a media storm following comments from his former colleague Garry Monk at a press conference.

Monk's characterisation of Clotet, a man who had assisted him at Swansea and Leeds as well as Birmingham, was unrecognisable to those who know the Spaniard best. What's clear is that Clotet has no intention of being drawn into a slanging match but he is clearly grateful for the support of the Birmingham fans who were quick to rally behind their new boss.

"I try to stick to my role, always put the club first, and act with professionalism because at the end of the day I am representing them," Clotet tells Sky Sports. "I think the supporters understand that I am just a little piece in a big club. I like that they understand we are giving everything so that we can live the kind of Birmingham that we all want to see."

After losing their way badly under Gianfranco Zola and Harry Redknapp before suffering a points deduction during Monk's reign, Birmingham are enjoying a period of relative stability right now. More importantly, there is now a plan in place to take the club forwards with a new playing style and a focus on harnessing the potential of the academy.

The style change has been significant under Clotet. Birmingham's possession stats were the lowest of any team in the Championship last season. The average number of short passes per game was only 227, while their passing accuracy was just 62 per cent. Only Rotherham registered figures lower than that and they were relegated from the division.

Those statistics have altered dramatically this term. Under Clotet, Birmingham are being more patient in their build-up, playing 88 more short passes per game. Their passing accuracy has improved to 73 per cent - the biggest increase of any team in the Championship. It's no coincidence. It is part of a plan to forge a new identity for the club.

"This is the vision of the club," explains Clotet. "It is a kind of football that is not easy to play but it was being implemented in the academy and the idea that the club had was to lock this idea of football in across the whole club. Playing this style will help the academy players make that last step to reach the first team, which is never an easy step to make. 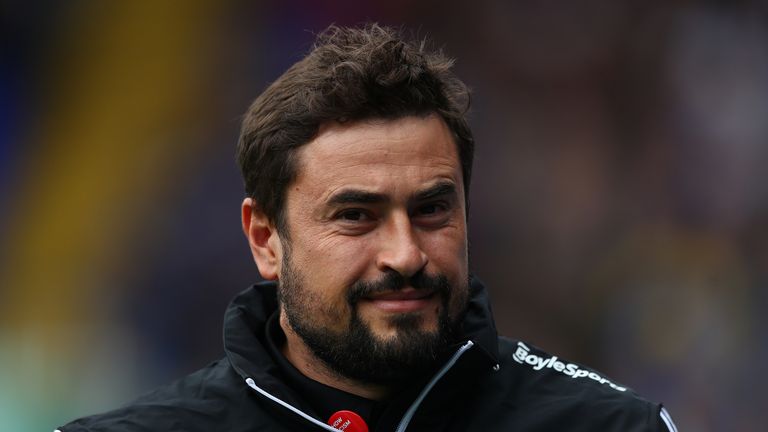 It was like turning the Titanic, so to speak.

"At the beginning of the season, we all thought that we had a huge task ahead of us. It was like turning the Titanic, so to speak. But we made a plan, we focused on what was important, and we believed that we could do it. Everyone has been on the same page, from the owners to the youngest player in the academy. Everyone understands the vision.

"We need the fans to understand the process too and that there will setbacks. When you are trying to play this football you cannot expect a miracle in a short space of time but we can take steps in the right direction and continue to learn. The important thing is that the players have embraced it. It has become a trademark and an identity for the team really."

It happens to be an identity that is much more in tune with Clotet's own ideas about the game. After all, this is someone who spent his student days in Barcelona sneaking out of class to watch Louis van Gaal's training sessions before travelling the globe in search of inspiration from figures such as Marcelo Bielsa. He has worked in four different countries.

Clotet cites his time with Malmo, where he was assistant manager back in 2010 when the team won the title for the first time in six years, as the most relevant experience to what he is now trying to achieve with Birmingham. That success was built on a model of youth development and a virtuous cycle of player sales that helped the club to grow.

"Afterwards, I realised how good that was because there were a group of young players getting experience together," he recalls. "It became a trademark for Malmo. They improved the academy and they always brought young players through. As a consequence, they increased their revenue and were able to make the next step as a club.

"All clubs put a lot of resources into their academy and with ours there are players who you look at and think that with the right guidance, if we plan it properly together, they might be able to make it. So let's design a path and wait for the right moment to arrive for the player. That's something that we are doing because it is the smart way to maximise our resources."

Bellingham is the symbol of the new Birmingham

There are a number of youngsters in Birmingham's first-team squad but the standout performer is Jude Bellingham. In August, the 16-year-old midfielder became the club's youngest ever player, breaking a record set by Trevor Francis. He netted his first goal later that month before going on to score the winner against Charlton next time out.

Bellingham has since started Birmingham's last ten games and after a summer in which he was linked with a number of Europe's biggest clubs, that interest does not look set to go away now he has become a Championship regular. Chelsea are the latest said to be watching him and while Clotet's doesn't relish that, he is thrilled by his progress.

"I think there is nothing better than seeing a player who has been developed completely at your club make it through to the first team," he says. "And making it properly too because it is very easy to give minutes to young players. Playing them when you are sure they are going to make it is different. We planned everything very well with Jude.

"We started him in a position that would suit him and release some pressure on him, as a kind of false winger. Slowly we moved him into midfield where he could gain confidence. Now we are playing him in his position in a more advanced role. It took careful planning to make sure that he would make it. Now the fans have one of their own on the pitch.

"It is important to say that he has had a lot of support from the experienced players. Everyone has helped with every detail to make sure that he can do it. What I have seen in Jude is that the more games that he has played the more difficult it has become for me to see a ceiling in his performances. I just get the feeling that he is getting better and better.

"He is more used to the league and more used to the position that he is playing. He is not just focusing on playing his game, he is focusing on helping us to win. What has surprised me a lot is how strong he is mentality to cope with all of this. He never gets down. Every little mistake is just an opportunity for him to learn. He is so impressive."

Bellingham is the poster boy for the new Birmingham, his breakthrough seen as a vindication of the strategy. The plan is long term but the rewards could come sooner than anticipated. Two wins in front of their own fans this week could nudge the club into those play-off places.

Clotet does not want to allow himself to become a hostage to results. It was only last week that he was named as permanent head coach after six months in the job on an interim basis. He insists it was never a problem. Now he wants to see if a promotion push is possible.

"We are very proud of the team at the minute. At the end of the day, the club has been struggling to avoid relegation for the past few seasons now. This is the first time that we are not looking behind us. The focus is on the play-offs because the points we have gives us a safety net behind us and allows us to aim for better and chase the ones above us."

That will be a tough task. But whether Birmingham make it or not, there is a sense that they are on the right path again. And a feeling too that they have the right man in charge.

"I really liked my position as assistant manager because it allowed me to focus on the details but now I am in a position where I can put all my experience into the service of the club. I have to think about the big picture and how to get to where we want to get to as a club. My mentality is a team mentality. We need everyone doing everything to get the club there.

"I am just enjoying being part of that process. I love the fact that the team is doing well and I love what we are trying to do together here as a club."