Richie Wellens has taken Swindon to the top of the table. Adam Bate caught up with him to discuss busting myths in League Two, that difficult start to management with Oldham, and why having a director of football helps

“There is a myth about League Two,” Richie Wellens tells Sky Sports. “They say that you need a big lad up front and to get it forward as quickly as possible. That it’s all about second balls and getting crosses in. But you can get success by doing it a different way.”

Wellens is proving that. The Swindon Town manager has his team top of League Two. For the first time in a long time, the club's supporters are enjoying themselves again. That's not just because they are winning games. Swindon are one of a number of clubs that includes Crewe and Forest Green who are playing more of a passing game in the fourth tier.

"We are not just going out and trying to win any way possible," Wellens explains. "We wanted an identity. That was important because, for the last six or seven years, it had not been going well for Swindon. Before that, they were renowned as a good football team who played the right way. We have managed to get that back and give fans a bit of belief.

"It has taken us a little bit of time. The summer was important. We got the recruitment right. We brought players in who were capable of playing the way that we wanted to play. When you are playing and winning football matches in a certain way - a way that the players are enjoying - then you feel a lot better. So far it has gone really well."

It is some turnaround for manager and club.

Wellens' first job in management ended in relegation with Oldham in 2018. The club had been rock bottom of League One when he took charge and though he won his first four games and delivered midtable results from that point onwards it did not prove enough to save a club that was in turmoil off the field for much of the campaign.

"Everything was thrown at me in that first job," says Wellens. "It wasn't just on the pitch. The facilities were not great. We had issues with paying the players and I had to learn about managing upwards. It can be difficult when your first job doesn't go as planned but I have come out the other side. Thankfully, I was given this opportunity at Swindon."

Not that it felt much of an opportunity after his first game in charge in November of last season. That ended in a chastening 4-0 home defeat to Carlisle. Wellens could have been forgiven for wondering what he had let himself in for. Everything that could go wrong, did go wrong that day. However, that inauspicious start proved the catalyst for change.

"I had been in the building one day but pretty much straightaway I found out that there were lots of problems," he says. "For a couple of hours after the game, everything was doom and gloom. But the good thing was that it allowed me to make decisions quickly. After one of the toughest days in the office I have ever had, we won three on the bounce."

Wellens really put his stamp on Swindon in the summer. 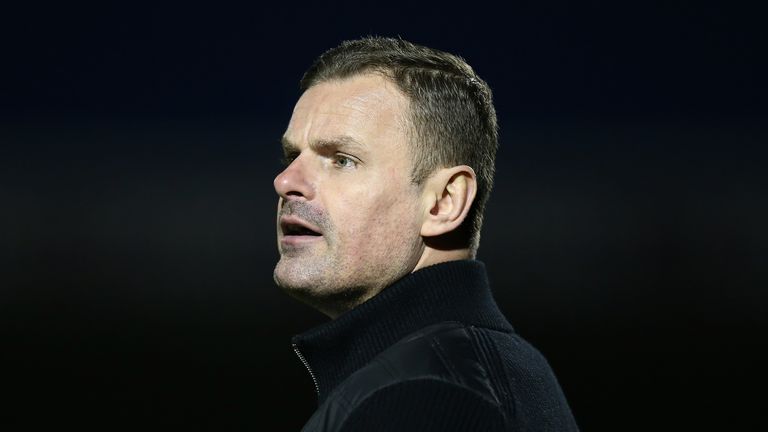 If you are not 100 per cent, get a massage. Stay away. Don't get the rest of the group down. If you train half-hearted then you won't be in the squad.

"I had sensed right from the start that the players wanted to go out and train half-hearted," he adds. "That was a problem. It was difficult to implement what we needed to implement in mid-season but from the first day of pre-season, I made it clear that if you come out to train you have to be 100 per cent and train like it's a game.

"If you are not 100 per cent, get a massage. Stay away. Don't get the rest of the group down. If you train half-hearted then you won't be in the squad. Everyone took it on board.

"Recruitment was important in the summer too so we really had to put the work in then. If we had been lazy in the summer then it would have come back to bite us."

Swindon's structure means that some of that responsibility was lifted off Wellens' shoulders with Paul Jewell brought in as director of football. The pair have a good relationship. "He has been a massive help because he takes the majority of calls from agents," says Wellens. "If you spend all your time doing that you can get a lot of rubbish thrown your way."

That has allowed him to focus instead on coaching the team.

Much of the more in-depth tactical work was done during pre-season. "If you want to take tactical sessions in the rain in December then players will switch off," he says. "But when the sun is out in the summer, that's when players are prepared to listen and concentrate. We managed to get some important tactical information in back then."

But where exactly do Wellens' tactical ideas about the game come from? The 39-year-old former Manchester United trainee naturally counts Sir Alex Ferguson among his coaching influences. But it was under another of his mentors, Nigel Pearson at Leicester, who he describes as a massive influence, that Wellens really began to think about the game.

"I was 33 when I did my cruciate and you know at that age that you are not going to come back as the same player. it gave me a lot of time to look at things. My legs had gone when I came back but I still managed to keep going because I was thinking a lot more about the game, how to create space on a pitch and find angles. I learnt a lot from that time."

He is still having to adapt his thinking. Not least because opponents have adjusted their approach against Swindon now.

As well as playing a passing game and scoring more goals from open play than any other team in League Two, Swindon have also scored the most goals on the counter-attack too.

"We started playing out from the back so teams started pressing us," Wellens explains. "When you have pace up front then you have to be prepared to put the ball in behind too. So we are doing that. We have the pace and we are scoring different types of goals.

"We don't just pass the ball in front of teams and bore everyone to death because every time we get it we have to get our 20 or 30 passes in. We can score goals on the counter-attack and on transitions if it's on. But if teams sit off and we have to probe for the opening and be patient then we can do that. We have different tools in our armoury."

The myth was that those tools weren't necessary in League Two. That myth has been busted. But Swindon don't plan to be there for much longer.