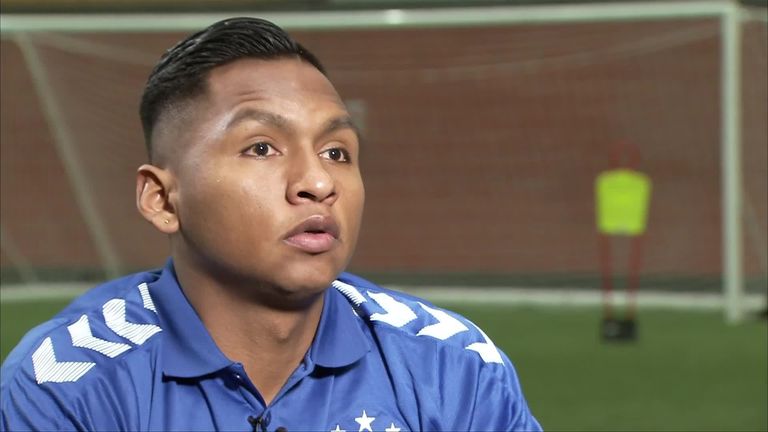 We have identified inaccuracies in the translation of Sky Sports News' interview with Alfredo Morelos. We apologise to both Celtic and Rangers football clubs as well as Alfredo Morelos for the issues caused by these errors.

After numerous steps undertaken by Sky to verify the interview thoroughly we can be clear that at no point did Morelos allege that any racial abuse was directed at him by Celtic supporters in the interview. We apologise to the supporters of Celtic Football Club for this serious error.

We are reviewing our procedures for translated interviews to ensure this does not occur in future.

Below is the full transcript of the video published on Sky Sports with a professionally verified translation.

SSN: Alfredo Morelos, an absolute pleasure to sit down with you, learn a little more about you, about who you are. I want to begin with the young boy who kicked a ball about the streets of Cerete. What was that boy like?

AM: It was really great - I started my career at age five, my father encouraged me a lot to take up football - it was great, he was somebody special and it was important playing in Cerete.

Tell me about Cerete. Could it be a dangerous place at times?

I'd describe myself as someone with a good heart and down to earth, so I hope that others can follow my path, have a career in sports and get ahead. There's a lot of talent there.

People in Britain know about your disciplinary record, I'm afraid, Alfredo. But what was it like in Finland?

In Finland I never had a single problem, with cards, same goes for Colombia as well…I don't know, there are lots of reasons…so now I need to carry on working and fighting for everything because the truth is I've made lots of sacrifices…

When you get to Rangers, I think that you really feel the intensity of football. You can feel the tension on the pitch and I would say I'm the kind of player that wants to make himself felt on the pitch. I feel strong, never afraid of anything, able to face things in the best way possible - I never fear any of my opponents or rivals and I stay strong.

Is that the boy from Cerete? If you hit me, I'm going to hit you back?

I was in fights at school and in the streets, I never shied away from anyone, I've always been someone with a lot of personality and that's part of my job. Football is very physical, very exciting - when you hear the roar of the fans, it really makes you want to get stuck in and play well.

Do referees treat you differently from other players?

Yes, I feel that sometimes they're not fair with me. I don't see why, but I'm working on improving lots of things, it's very important for my career and to be a professional as well.

I've been training hard and getting help from fellow players and advice from the trainers.

Do you have any concern that your discipline problems would stop a move in the future?

Maybe that could be the case, but as I say, goals make you popular and can open a lot of doors. Right now I need to focus more and keep on learning.

And you had improved clearly and then December came and those two red cards. A lot has been made of the two gestures, one against Motherwell and then in the game against Celtic. Can you explain why those were made?

Well first I'm going to talk about the situation against Motherwell. We were winning a very important away game and when I scored I celebrated like I always do. There is no reason for me to offend the fans of an opposing team.

I made the same gesture to the Rangers fans, to my own crowd. I didn't do it against them, and as I said, I've always celebrated like that, I never meant to offend anyone.

In the game against Celtic we were winning 2-1, a normal match… and, I don't know, I fell over, I wasn't trying to get a penalty, but the ref decided to send me off and, well, I accept that, it's his decision.

But my gesture was just a way of saying it's all over, the game was finished anyway, there were only 30 seconds left. They started insulting me and shouting at me, but that gesture only meant that the game was over.

How often do you experience racist abuse from a crowd?

Yes, I feel there are lots of racist gestures aimed at me. At Aberdeen, for instance, they insulted my mother, me, they threw coins at me. People often throw things at me when I score at away games.

But it doesn't matter, I'm someone who pushes forward and I don't pay too much attention to it. But the point is this is my job and my passion to score goals and so I know that the opposing fans aren't going to like it.

Did you know what you were getting into when you came to this city?

The passion for the derby is the best I've ever felt in my sports career here at Rangers, a real classic, lots of incredible people, a real enthusiasm, and I love playing these classic derbies, I play with a lot of commitment and respect for my team - it's really beautiful, the best experience I had in my career. And I hope that next season we will continue to beat Celtic, we're on a good run.

As far as my personal life in Glasgow goes, I'm enjoying it. I like it because of the football, and the fact that I'm in a great club. It does get more complicated though when I go out, because people love me, but there are many who don't like me and insult me, so I tend not to go out so much and stay at home.

Who are your friends? Who makes you laugh? Who do you have fun with?

Yes, I'm not allowed to drink it, but I have tried it. They have something similar in Colombia, but this one has too much sugar, so I can't drink it.

Haggis, have you tried haggis? There was a Burns Night with the club the other night - do you know what's in it?

Yes, that song really fires me up. It makes me run and like I said in a previous interview, to get stuck in, to score goals and work for my team so they score. When they start singing that song it really makes me…I don't know, more motivated to play better.

How inspirational is Steven Gerrard?

He's very motivating - to be managed by a football legend is really great. I see him every day - they are like a second family to me, my companions, the trainer - it's my family, I share my life with them every day…

Your goals in the Europa League have stood out to people beyond Scotland - are you confident you would score goals anywhere?

Goals are acts of love. Any great club loves you when you score goals. I scored 30 goals in Finland and Rangers really liked me and brought me here. I've already scored almost 30 goals in half a season with Rangers. Last season it was more than 30. I will score goals with whichever club I play for.

I see myself as a goalscorer, and if this allows me to get in another league, I'll go on scoring. I'll work for that, I would need to do a lot but for now the important thing is to play for Rangers, focus on Rangers, finish the season with Rangers and win titles.

Off the pitch, Alfredo, you've begun a foundation. What made you do that? Why is it important to you to give back to your community?

I remember when I began, when I was a boy, there were many people around me. Cerete is a very poor town, and there are many people who have very little.

So, that's the aim - there are many kids, many people who can't show their talent and what they can do, their love of sport. The foundation is something really special for me, my family and my wife, and for all those people who work for me and are giving their all to it. We want to help all those many people who need it and that is my aim from now on.

It would put a smile on your face if Rangers win the league this year? What sort of challenge is it now?

It's a great challenge for all of us, for all my companions and the trainers… We want to win all our games, so that when we play them we can win the title.

Are you going to get that goal against Celtic by the end of this year?