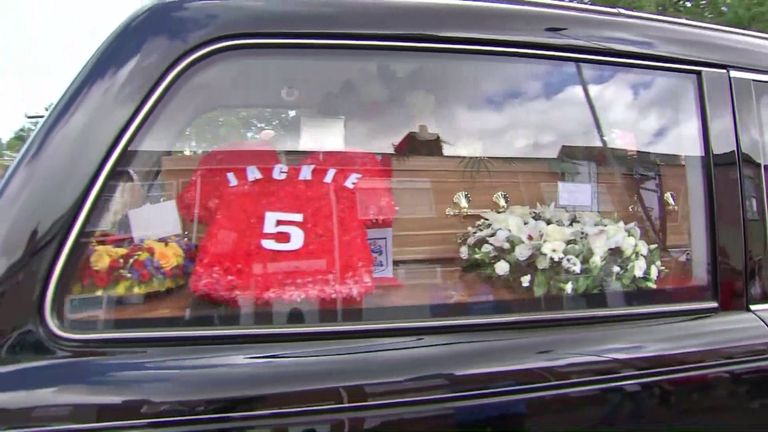 The North East turned out in force to pay their respects to England World Cup winner Jack Charlton.

Crowds began to gather in the former Leeds defender's home town of Ashington in Northumberland early on Tuesday morning ahead of a private family service in Newcastle.

Jack Charlton: A World Cup hero with England and Ireland

The funeral cortege passed through the town where he and his brother Sir Bobby spent their formative years.

Charlton was also being remembered in Ireland - the country he led to the 1988 European Championship and the 1990 and 1994 World Cups.

A message from Niall and Mikey Quinn...

"Farewell Big Jack, thanks for everything" pic.twitter.com/clZD7wBpDs

The Football Association of Ireland had called on all Republic fans to wear green in memory of Charlton and make donations in his honour to the Irish Cancer Society and the Alzheimer Society of Ireland.

"These charities are both appropriate following Big Jack's death and we are asking any fans who can to support them as we all remember Jack with so much fondness today," said Tony Considine of supporters' group You Boys In Green.

"It is going be a sad day for Irish football but also a day filled with pride and if it will be a fitting tribute if we can help these two great causes as well."