Liam Rosenior on Scott Parker: "We spoke from the beginning and half-time, he was very pragmatic tonight and that's a sign of a top-level manager"

Scott Parker led Fulham back to the Premier League at the first time of asking - with a tactical masterclass to beat the Championship's top scorers in the play-off final.

An unusually compact Fulham sealed promotion in the play-off final thanks to a pair of strikes from Joe Bryan - the first crafted by Parker himself - as free-scoring Brentford were kept unusually quiet by the Cottagers' defence in a 2-1 defeat at Wembley.

A visibly emotional Parker spoke to Sky Sports after full-time, and explained how Bryan's opening goal - a long-range free-kick which caught out David Raya at his near post - had been crafted, as well as how Fulham switched from their usual 4-3-3 to successfully frustrate Brentford.

He said: "The opening goal was planned. We looked at Raya's positioning from free-kicks, he's very aggressive. I called Joe over before the free-kick to try to make out we were doing some tactical thing, let's move it over, but I told him to keep an eye on his positioning, and commit to the shot. He did it, and it worked.

"We did it in the last game and it went nowhere near the goal - tonight, thankfully, it's worked. My staff deserve full credit for that. Fulham boss Scott Parker gave an emotional post-match interview after their Championship play-off final win against Brentford, saying he was proud of how his team responded to last seasons relegation

"We've worked on being really diligent, in terms of winger, full-back, holding midfield player, and we wanted to get Bobby Decordova-Reid inside and create numbers in and around the middle of the park. I thought that worked really well, we had control first half, we were brave, second half we lost it a little bit, but I thought we still had a bit about us. It worked really well tonight.

"The facts are, the reality is, you can't really enjoy it. You win a football match and by the time you get to Saturday night, having a beer or a Chinese, you're already thinking about Monday morning, the next game. We live in a world and a profession where you win a game, you lose the next one and you're deemed a failure.

"You realise you have to always be at the top and always planning. Not for me, I hope that after tomorrow I can just sit down with the family, my wife and kids who have been on egg shells for the last year probably, and they get their husband and dad back who does the things I want to do really." 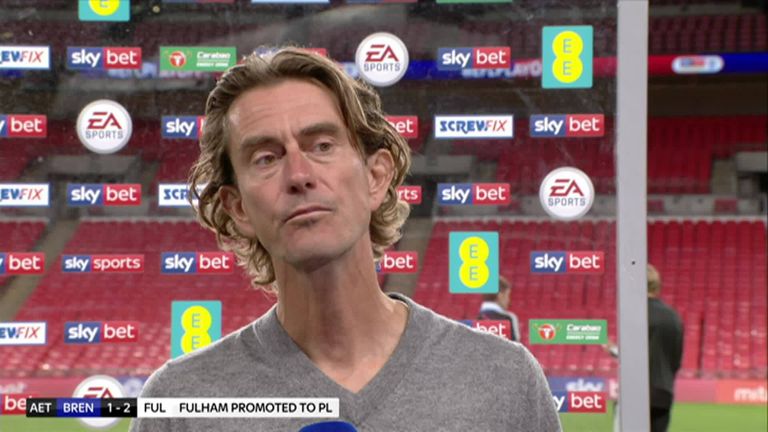 'Parker has signs of top-level manager'

Former Fulham defender and now Derby first-team coach Liam Rosenior told Sky Sports Parker's tactical adaption had shown his quality as a manager, at the end of his first full season in the job since taking over from Claudio Ranieri in February 2019.

He said: "On the night, I think Scott Parker got his tactics spot on. We spoke from the beginning and half-time, he was very pragmatic tonight and that's a sign of a top-level manager. He knew the strengths of Brentford, he said to Joe Bryan about the goalkeeper's position.

Smith: How Fulham won it

Dean Smith, who was promoted as play-off final winners with Aston Villa last season having previously managed Brentford, told Sky Sports Fulham's joy had come from stopping the service to their deadly front three of Said Benrahma, Ollie Watkins and Bryan Mbeumo - who had scored 59 league goals between them this season.

"They stopped Brentford at source, pretty much," he said. "They stopped the balls into Said Benrahma. He was quiet, Ollie Watkins was quiet, and Bryan Mbeumo came off. He just made sure Brentford couldn't be as potent as they would like to be.

"They stayed really compact, neither team really went and pressed too high, but they just made the middle of the pitch really compact and looked to go round them.

"There weren't many big chances throughout the game for either team. The goalkeeper's made a bit of a mistake for the goal, trying to read the cross, but it's a bit of excellence from Joe Bryan for both and sometimes it takes that bit of brilliance.

"Tonight was a different kind of performance. They've given Brentford the respect they deserve and played a different way today. Scott Parker's right though, they were still brave on the ball, played through Brentford a few times and got it into Josh Onomah. 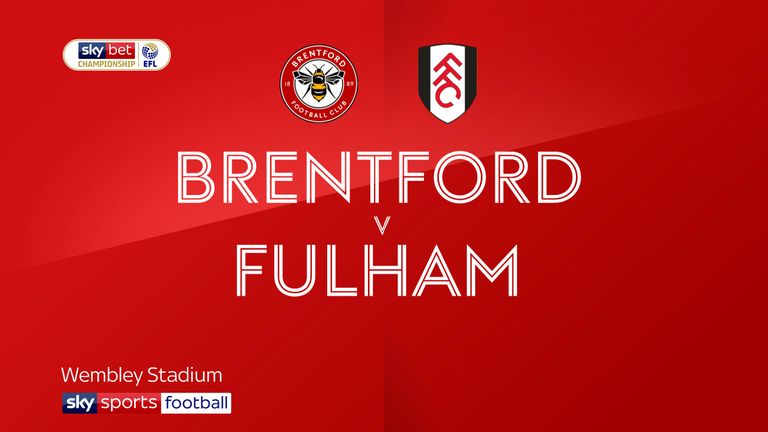 "He's got a way he wants to play, but he wasn't scared to change it defensively. Without the ball they were excellent, with some great passages of play.

"If you open it up, there's a lot of goals in that Brentford team, so I think it suited Fulham tonight.

"The first feeling will be relief [for Fulham]. That's what you're trying to do, right from the start, get promoted. They'll be elated after that. It's a fantastic achievement. To come down, it's tough because you have to change a losing mentality around. The job Scott Parker has done is tremendous."

Scott Parker had a philosophy and a system and it did not seem likely he would compromise his principles to try and overcome a Brentford side that had bettered them twice this season.

How wrong we were. For starters, the more defensively-minded Denis Odoi was selected over Cyrus Christie at right-back, and he fielded a high-pressing hard-working front three of Aboubakar Kamara, Neeskens Kebano and Bobby Decordova-Reid.

The Fulham boss even played a huge role in their all-important opening goal, tipping off Joe Bryan to seek out the bottom corner knowing that David Raya positions himself high off his line.

A Brentford side that had scored more goals than any other in the Championship this season were limited to just four shots on target in 120 minutes, and they failed to really trouble Marek Rodak until Henrik Dalsgaard bundled in a late consolation.

Brentford may feel a little aggrieved a couple of potential red card shouts against Harrison Reed and Tom Cairney in each half resulted only in yellows, but overall it would be impossible to deny it was a well-earned win for Fulham.