Reacting to the proposed European Premier League, Neville told Sky Sports News: "The big issue that I have with it, is that at this moment in time, in the middle of a pandemic and when football is on its knees at so many different levels, the idea that a $6bn package is being put together to set up a new league when lower clubs are scrambling around to pay wages and stay in existence.

"Football is going to eat itself soon because the fans will turn away... that cannot be allowed to happen."

"The leak probably doesn't suit Manchester United or Liverpool at this moment in time as they're seen as the big, bad bullies.

"There is enough wealth in the game to look after all the key stakeholders.

"It's almost a tap-in for Manchester United, Liverpool and others to be able to say: 'There's £10m for non-league, there's a couple of hundred million rescue package for EFL clubs'. I don't get why we're not looking after the wider game, while having these discussions over $6bn debt packages with JP Morgan. It is obscene." Neville fears football fans may soon stop caring about the game they love and could turn away from the sport.

"Football is going to eat itself soon because the fans will turn away," Neville said.

"The people who would have cried because they have missed going to the stadium so much are starting to dislike large elements of what they're actually supporting. That cannot be allowed to happen. The potential creation of a European Premier League would see 'FIFA against UEFA', according to Sky Sports News chief reporter Bryan Swanson

"I want to see Manchester United play Paris Saint-Germain and Barcelona, but I also want to make sure that Ossett Town have funding to be able to stay alive and that grassroots facilities are good enough so that every child that wakes up and has a dream of being able to play for their country can play football safely in a good environment with good facilities."

Liverpool, Manchester United, Arsenal, Tottenham, JP Morgan and Providence have all declined to comment regarding the reports, while Key Capital Partners could not be reached for comment.

'Billionaire owners are out of control'

Kevin Miles, the chief executive of the Football Supporters' Association, has backed Neville's calls for independent regulation in English football and says talks of English clubs' involvement in the plans should be "the last nail in the coffin of the idea that football can be relied upon to regulate itself". 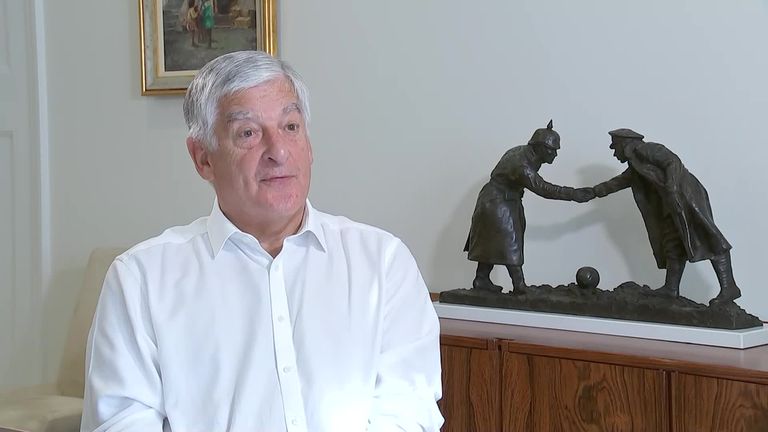 Former FA chairman David Bernstein says football has resisted change for too long and introducing an independent regulator is the only way out of the current ‘crisis’.

Miles added: "The latest reports of plots, allegedly involving Manchester United and Liverpool, to create a European Super League, expose the myth that billionaire owners care about the English football pyramid, or indeed anything other than their own greed. These billionaire owners are out of control.

"Football in all its forms in the UK, from grassroots to the top tier, occupies far too important a place in our society, our culture and our communities to be jeopardised by an even greater concentration of wealth in the hands of half a dozen big clubs.

"Decisive action is now needed to protect the game we love. We have already been promised by government a fan-led review of the governance and regulation of football. That process needs to start as a matter of urgency before the super-rich custodians of the biggest clubs can do any more damage."