Liverpool must do something big in transfer market to address lack of goals, says Jamie Carragher

Liverpool suffered a fifth straight home defeat for the first time in their history; Jamie Carragher: "Jurgen Klopp famously said that his pressing is better than any No 10, but when you look at Liverpool right now, they look like they need a No 10" 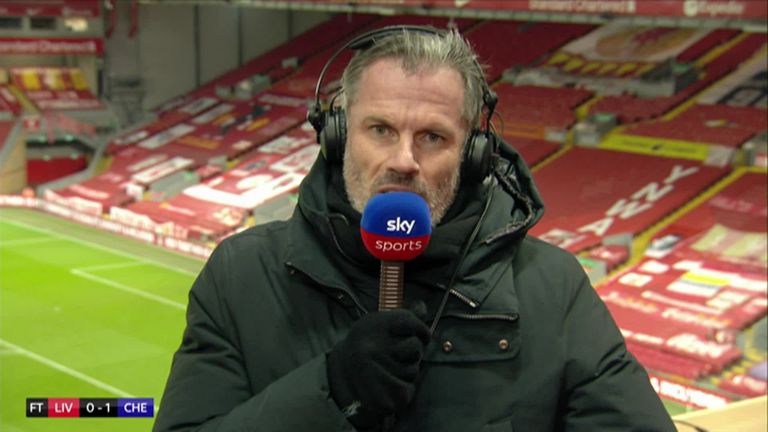 Jamie Carragher reveals what he thinks has gone wrong at Liverpool this season, and what is missing from the Reds' performances at Anfield

Jamie Carragher admits Liverpool must take drastic action in the summer transfer window to address the lack of goals after their woeful home form became a crisis.

It shows how far the defending champions have fallen that this was billed as a battle for a Champions League place but in reality, there was only one side in the hunt and all it took was Mason Mount's 42nd-minute goal to lift them back into the reckoning.

Chelsea's last win at Anfield in 2014 effectively did for the title hopes of Brendan Rodgers' side. This one was a blow to Liverpool's chances of a top-four finish. 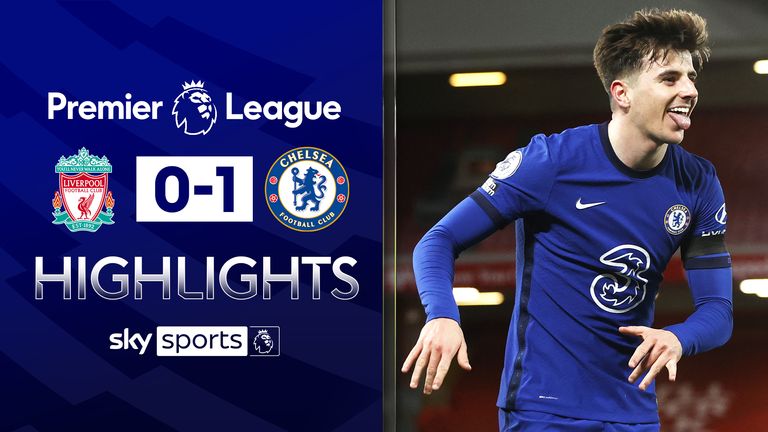 FREE TO WATCH: Highlights from Chelsea's win against Liverpool

Jurgen Klopp's side, now four points adrift of that with Everton and West Ham ahead of them, have now gone more than 10 hours without a goal at Anfield, a testament to the old adage of 'if you don't shoot, you don't score'.

Sky Sports' Jamie Carragher was asked what the fallen champions have lost, apart from their crippling list of injuries to key personnel throughout the campaign.

"Goals, massively," he responded. "They don't look like scoring. It's not just the games in which they haven't scored - you never even feel like the goals are coming. With 20 minutes to go, you don't really feel like Liverpool are going to score a goal.

"It felt like it needed to be a big Chelsea mistake to be a goal for Liverpool. I mentioned the RB Leipzig game beforehand as I felt Chelsea would play like Leipzig in that they played their own game and I was right - they pushed up high and played from the back.

"In some ways, that plays into Liverpool's hands, but they still couldn't exploit it. Against Leipzig, they did. Mohamed Salah and Sadio Mane got the goals but they were from big mistakes.

"At this moment when you're watching Liverpool, you're not quite sure where the goals are going to come from. I must say, I couldn't believe Salah came off.

"Liverpool were desperate for a goal so to take your top goalscorer off was a strange one."

Salah, the Premier League's top marksman with 17 goals, hadn't been substituted as early as the 62nd minute in a Premier League game since September 2017, the 5-0 defeat at Manchester City when as a tactical change at half-time.

Carragher was surprised by Klopp's decision to withdraw the Egyptian at a time when Liverpool were desperate for a route back into the game.

"Klopp's never been shy in taking Salah off the pitch," he added. "It's not a case where he's worried of taking his main player off. He's taken him off in certain games where Salah has been poor. He's a big goal threat, but a lot of the time where he's been taken off in the past, Liverpool's attacking play has been breaking down. You could understand it.

"He wasn't at his best tonight, but it wasn't one of those games where he was losing possession. He just didn't have much of the ball. You've got to remember that Salah is not a great player with the ball. He's better off the ball, making runs and scoring goals. 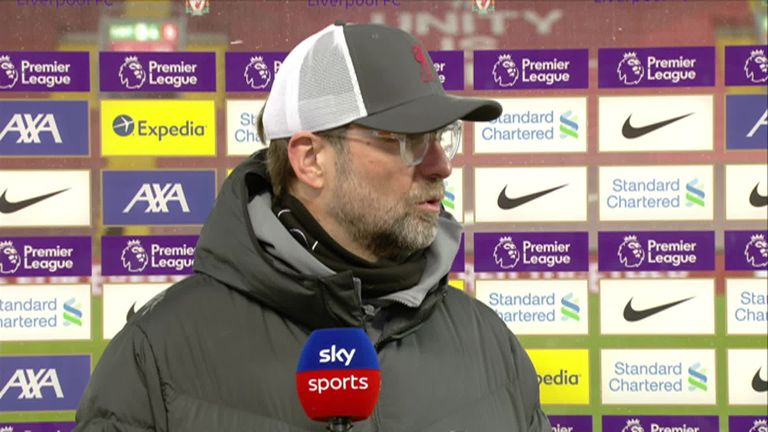 "Salah is a great goalscorer and what Liverpool have lacked is a goal, and it's what they needed in that second half. I was thinking whether there was something in the number of games he's played, but I don't know. It's hard to question Klopp, but I did think it was a strange one. When you need a goal late on, you need as many people on the pitch who can score you a goal, basically.

"It's not the first time he's done it and it won't be the last. At this moment, even with Salah on the pitch for an hour, Liverpool didn't look like scoring and that for me is a bigger problem than what's going on at the back.

"With the defensive issues, you've always got in the back of your mind that next season, Virgil van Dijk and Joe Gomez will be back. But when you're looking at the attack or the front six - and this is why I've been critical of Liverpool in games before - you can't use the defence as an excuse.

"The front six at this moment are not looking dangerous enough and there's no one really out injured too much. You could say Fabinho and Jordan Henderson are missing in midfield but they're more defensive players. That's the real worry for me going forward - where the goals are going to come from next season.

"Diogo Jota will help that - he looked sharp when he came on. But Liverpool need to do something big in the transfer market in terms of bringing someone in to score goals. It'll be difficult for Liverpool to finish in the top four as Chelsea were really impressive - they've got a really top squad.

"It'll be difficult to stop them. When you look at West Ham and Everton, they're in much better form than Liverpool right now. I don't think it's down to a lack of effort, but there's just something missing. Maybe we'll only get to the bottom of it next season when we see the crowds back. They just don't seem there in terms of energy and pace.

"Klopp famously said that his pressing is better than any No 10, but when you look at Liverpool right now, they look like they need a No 10. They need that type of player as the pressing is not quite there.

"Teams are coming to defend deep, and Liverpool haven't got anyone between the lines to play that pass. They had Philippe Coutinho but he left so they built in other areas. But they need that type of player.

"Without the pressing quality they had to help create chances, Liverpool haven't got anyone who can make that final pass."

Redknapp: Liverpool must find a way to finish fourth 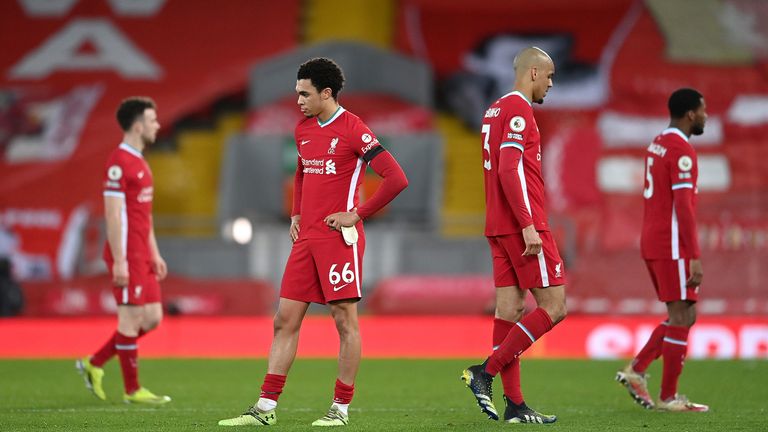 The hosts failed to register a shot on target until the 85th minute and Georginio Wijnaldum's weak header was never going to test Edouard Mendy.

They have taken one point from the last 21 on offer at home since Christmas and scored just two goals, one of which was a penalty.

Jamie Redknapp told Sky Sports: "I 100 per cent get what Carra is saying in terms of needing someone to score goals, but it wasn't a problem last year? He brought in Jota, and we spoke of Liverpool last year as being like clockwork.

"Firmino would come off his central position and he'd press the midfielder. They'd win it back and they'd have the two full-backs raiding forward. They would press the life out of teams.

"I see a Liverpool side now where too many of them are feeling sorry for themselves. Trent Alexander-Arnold was the best right-back in the country last year but this year, he's well off it. His levels defensively and his energy... he doesn't look the same player.

"Confidence is extremely low. Right now, there's almost too many things to look at. If you have one problem, you could perhaps solve it by slightly tweaking the system. Someone said last week they could move to three at the back, but nothing's really going to change as they've had so many different combinations.

"Liverpool have been having to force the issue all the time, and they almost have to somehow, in some way, try to get into the top four. They have to try to find a way to battle through this really difficult time.

"They haven't got the luxury of the Kop to suck the ball into the net this season. All they can do is get their heads down and work as hard as they can to make things happen. I think Klopp was making a statement by bringing Salah off as he was saying that they all need to liven up.

"He was saying, 'it doesn't matter who you are, this isn't going to carry on'. 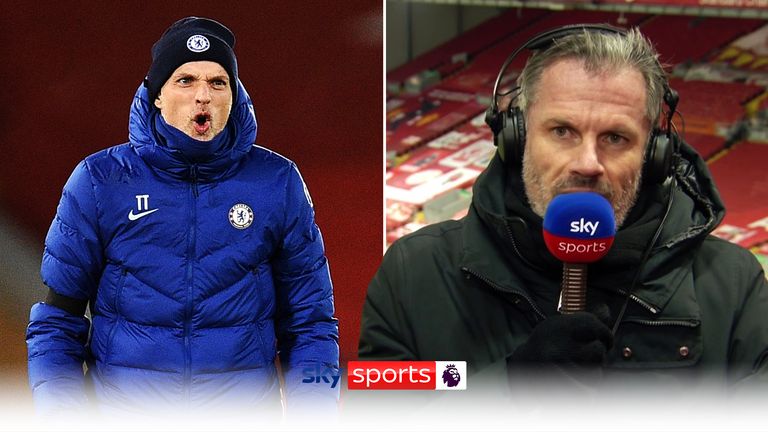 Chelsea's organisation, drilled into them by Thomas Tuchel in the short time he has been at the club, served them well as Liverpool ran down blind alleys, aimed hopeful crosses into the box but generally ran out of ideas.

The Blues, unbeaten since Tuchel replaced Frank Lampard in January, have 47 points from 27 games, one more than Everton who had briefly gone fourth by beating West Brom.

"What Mount produced today was brilliant," Cole told Sky Sports. "He's one of the most focal players of this team. He presses with intensity, he mentioned that they wanted to press high and try and regain it high, he's the one who initiates the press.

"He starts it, he's got the movement, he's got the understanding now and he's adding goals to his game. He has to start focusing on scoring and being more effective, but what a player he is. He's got that attitude and for me, next season, he will definitely be pushing for the captaincy.

"I guarantee you after the first or second training sessions of [Tuchel] watching Mason Mount, he was the first name on that team sheet. I worked with him at Derby, I've watched him at Chelsea, I've seen the dedication, hard work and graft he puts in, not just in the training session but after. For me, he's the best player for Chelsea."

Redknapp added: "He's the ultimate modern-day player. He can play in a two in midfield, in a No 10, he plays wide left, wide right. He has that much quality, he could play him in a false nine if you had to. His starts on the press, his touch, his finesse - I think he's got everything to be the next Chelsea captain going forward.

"Chelsea didn't produce players in that academy for such a long time and he got given an opportunity and he's taken it with both hands. Right now, what would he be worth in the current market? He is just such a talent.

"You're never going to sell him, he's the dream player and one of your own. They've not done this before - the last one was John Terry - to have a player like him. Of course, there's Reece James, who I think has more to do and is going to get better, but Mount leads the way for that team. What a star."