The Fair Game group is calling for an independent regulator to oversee the English men's and women's professional game; Fair Game wants to introduce some form of salary cap and to address the issue of revenue imbalance within and between the leagues

Ten EFL clubs are part of a group calling for a series of reforms designed to make football more sustainable.

The Fair Game group is calling for an independent regulator, backed by powers of statute, to oversee the English men's and women's professional game.

Its report, 'Solutions For Our National Game', rejects the idea that a reformed Football Association could perform this role because "it is not independent, as it is in direct competition with the professional leagues for sponsorship and national team players' time" and because it is a "commercial actor" in the game.

Fair Game wants to introduce some form of salary cap and to address the issue of revenue imbalance within and between the leagues in order to abolish parachute payments, which it says are "not fit for purpose".

Clubs must be more transparent and consistent in their financial reporting, the group argues, and present information in a "supporter-centric" manner, and the group calls for an immediate assessment of the scope and quality of dialogue between supporters and clubs to identify best practice for fan engagement.

It calls for owners' and directors' tests to be more robust. It says a new test must "be able to better understand the intentions of potential owners in order to prevent individuals from becoming involved with a football club for personal gain at the expense of the supporter community". 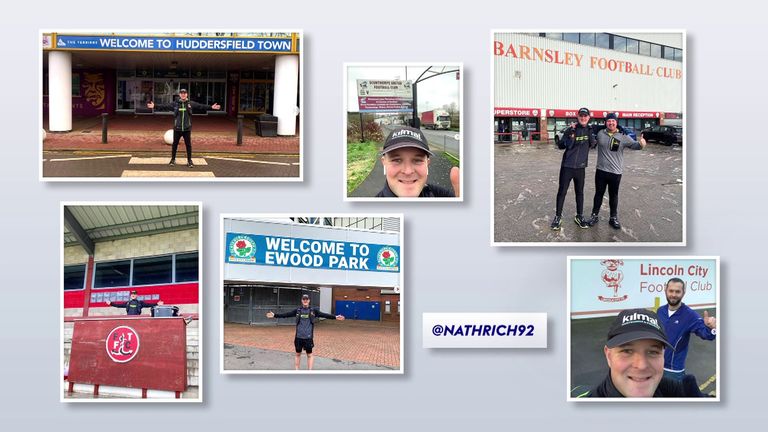 Rochdale fan Nathan Richardson has completed an epic 2,500 mile run around all 92 Premier League and EFL grounds to raise money for The Joshua Wilson Brain Tumour Charity and MIND

It suggests the splitting of the test in two - one for owners and one for directors - the requirement to provide a five-year business plan, and for the need for ongoing measurement of competence.

Equality, diversity and inclusion standards must be indexed in a consistent way by governing bodies and clubs, the group says, while measures must be taken to safeguard clubs' heritage.

Changes to the clubs' 'crown jewel' assets - such as their name, badge, colours and location - must be under the power of veto of supporters' trusts or be the subject of an application to an independent regulator, with thorough consultation.

Alternatively, such assets could be owned locally as essential parts of community heritage, or centrally by leagues, with clubs then licensed to play in the leagues and to use those assets.

It also suggests clubs coming into the EFL be granted a three-year grace period to replace 3G pitches, or for them to be permitted at League One and Two level, citing their importance for community use.

In short, the group hopes to incentivise the sensible and sustainable running of clubs and to set up a regulator to protect clubs for the fans who support them and the communities in which they are based.

Fair Game currently consists of Luton in the Championship, Accrington, AFC Wimbledon, Cambridge and Lincoln in League One and Bristol Rovers, Carlisle, Leyton Orient, Newport and Tranmere in League Two, along with a further eight clubs from lower down the pyramid. It says it is in discussions with "dozens more clubs" about joining the cause.

It is backed by academics and experts, and its aims are supported by shadow sports minister Alison McGovern.

One of the group's ambassadors, former England, Liverpool and Wimbledon defender John Scales, said: "Let's end the culture of gambling. We need transparency. We need to incentivise good clubs. Let's redistribute the parachute payments and give it to the clubs that are run well.

"Let's bring in a system that protects a club's crown jewels - the badge, the name, the nickname, the colours, its location. We want our clubs to be there for the long haul."

A number of the issues considered by Fair Game are being looked at as part of the ongoing fan-led review of football, which got under way in April. The Conservative Government promised it as part of its 2019 election manifesto.

The Government intended to launch it once the country was sufficiently recovered from the coronavirus pandemic, but brought it forward following the foundation and swift collapse of the European Super League in April.

It is being chaired by Conservative MP Tracey Crouch.

Niall Couper, a director of Fair Game and board member of the Dons Trust which owns AFC Wimbledon, said: "We are not a breakaway - we are in constant dialogue with the EFL - but we do believe we can be the breakthrough.

"There have been numerous reviews into football in the past, and sadly many of them are now collecting dust in the House of Commons archives.

"At Fair Game, we are committed to making sure the same fate does not befall this latest review, and that it comes with teeth and delivers real and meaningful change."