Louis van Gaal: Netherlands manager says he would have appointed himself and asks 'who else but me?'

Frank de Boer left his position following the Netherlands' last-16 exit at Euro 2020; Louis van Gaal's first game is against Norway on September 1; "I think if I was the Dutch Football Association, I'd also have approached me. Who else could have done it?" 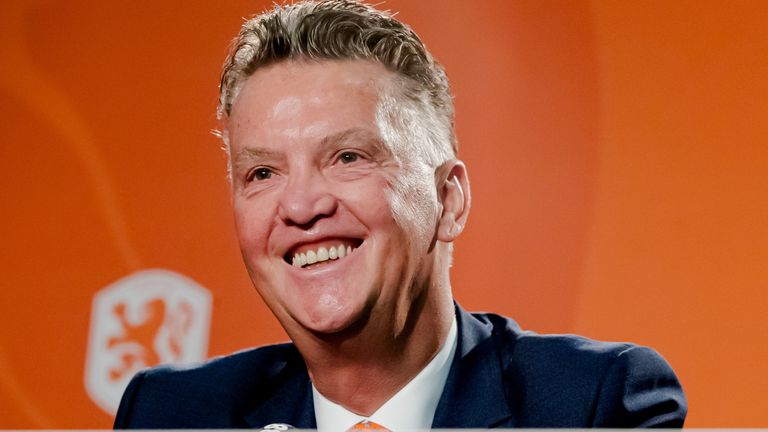 Louis van Gaal asked 'who else could do the job?' upon his return as manager of the Netherlands national team ahead of their September World Cup qualifiers

Louis van Gaal wants to become a World Cup winner with the Netherlands after taking over as national team manager again, and says if he was in charge of the Dutch FA he also would have hired himself.

The ex-Manchester United, Ajax, Bayern Munich, Barcelona and AZ Alkmaar boss previously managed 'Die Oranje' between 2000 and 2001 and 2012 to 2014 and is back for a third stint in charge.

The 70-year-old said he had not taken the job to chase his own dreams but to help Dutch football out of a quandary after the resignation of Frank de Boer following Euro 2020, and prior to the resumption of 2022 World Cup qualifiers next month.

"I'm not doing this for myself but I'm doing it to help Dutch football," Van Gaal said at his unveiling as Dutch manager.

First day at the office ✅ pic.twitter.com/5VV2dnEwLJ

"I've always done everything to help Dutch football. I've a lot to thank them for, the status that I have as a coach is thanks to them."

The Dutch FA said they had approached the veteran coach because they felt they needed experience in the job with little time before next year's World Cup in Qatar.

Much of De Boer's Euro 2020 squad will likely be selected for September's three World Cup qualifying matches as Van Gaal has not had time to scout potential new players.

The Netherlands sit second behind Turkey at the top of the Group G standings, and are determined to seal their place in Qatar after failing to qualify for the 2018 World Cup in Russia.

"I think if I was the Dutch Football Association, I'd also have approached me. Who else could have done it?" Van Gaal added.

"It might sound a little melodramatic, but I think experience is now very important because we do not have any time."

Van Gaal will have a day and a half with his squad before his first match against Norway in Oslo on September 1, followed by Montenegro in Eindhoven on September 4 and Turkey in Amsterdam three days later.

He has already named a 25-man squad for the trio of Group G games, with fitness being his top priority.

"We have to achieve immediately and you cannot do that without fit players," he said.

Van Gaal failed to lead the Netherlands to the 2002 World Cup finals in his first spell at the helm, but in Brazil in 2014 he took the Dutch to third place.