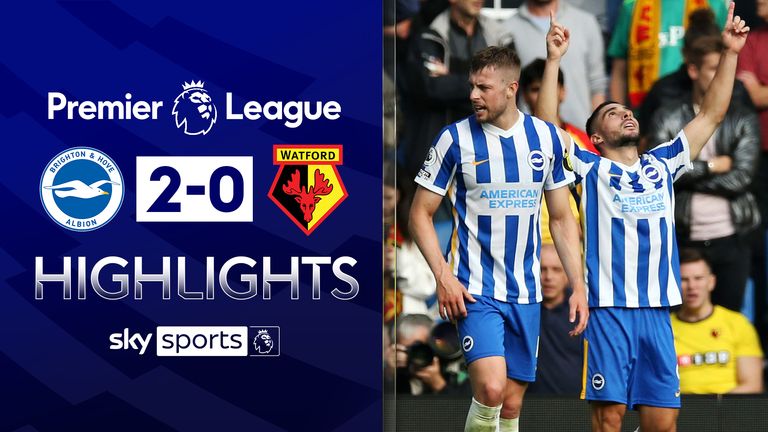 FREE TO WATCH: Highlights from Brighton's win against Watford in the Premier League.

Brighton moved to second in the Premier League after making it back-to-back wins with a 2-0 victory over Watford.

Brighton struggled offensively last season with their attacking stats a concern to Graham Potter but there are more positive signs this season with four goals in their two opening games. Both of their strikes in this impressive win came in the opening 45 minutes with Shane Duffy netting his first goal (10) for the club since November 2019 and Neal Maupay doubling the lead (41).

Maupay limped off with a shoulder problem at the break but Brighton's first-half efforts were enough as Watford improved but couldn't find the required quality in the final third to set up a comeback.

The win means Brighton have won their opening two games of a top-flight season for the first time in their history as they sit second in the Premier League, level on points with Liverpool.

How the Seagulls soared back at the Amex…

Brighton signalled their intent and set the tone for their performance by robbing Watford straight from kick-off but Leandro Trossard couldn't get a shot away on goal.

They would only have to wait 10 minutes to get their noses in front as a returning hero in Duffy gave the home fans something to shout about. Duffy was named Brighton's Player of the Year in 2019 but fell out of favour with Graham Potter last season and had an unsuccessful loan spell with Celtic. He has retained all his ability at attacking set pieces though as he powered home Pascal Gross' corner into the net via the underside of the crossbar.

Ismaila Sarr - so impressive in Watford's win over Aston Villa - flashed a strike from 20 yards over the crossbar but it was a rare moment of worry for the Brighton defence with their play in the final third creating ample opportunities in and around the box.

That savvy build-up play didn't always lead to a shot on goal as Trossard and Gross were particularly culpable for making one pass too many with a shooting opportunity available. Those wasteful moments didn't come back to haunt them though as Yves Bissouma robbed Tom Cleverley with an aggressive but fair press and Maupay stylishly finished for his second goal of the season.

Maupay's afternoon was over moments later though when he landed awkwardly on his shoulder and was replaced by Aaron Connolly after the break. Brighton remained in control of proceedings and really should have been out of sight but Connolly somehow spurned a glorious chance from eight yards out when it looked harder to miss.

Hornets boss Xisco Munoz responded with an attacking change in bringing off Craig Cathcart for Josh King and switching Sarr to an unorthodox right wing-back role. Cleverley stung the palms of Robert Sanchez whilst Emmanuel Dennis sprung free down the right and found the net but a correct offside flag cut short his celebrations.

Troy Deeney was called from the bench for the final 15 minutes with Watford opting for a more direct approach. It was a tactic that asked questions of the Brighton defence but Duffy and Lewis Dunk stood firm, making some crucial blocks inside their area.

Potter will be counting down the days until the transfer window shuts 10 days' time. If any club in the top-six are looking for a central midfielder who can do it all then Bissouma will be high on their lists.

Tottenham and Liverpool are among the clubs rumoured to be interested in the 24-year-old, while a possible switch to join former Seagulls team-mate Ben White at Arsenal has also been reported.

Bissouma was a driving force in the midfield, pushing Watford back at every opportunity with a display full of class and that packed a punch. Everything he does, he does with great speed which makes him a very tricky customer to deal with as Cleverley found out when he was pressed out of possession for Brighton's second goal. No player made more tackles (five) or interceptions (five) over the 90 minutes.

The game's outstanding player was dancing to the tune of his song to the beat of "Tequilla" by The Champs at full-time with his adoring public. They have a star in their ranks and are enjoying watching him up close. 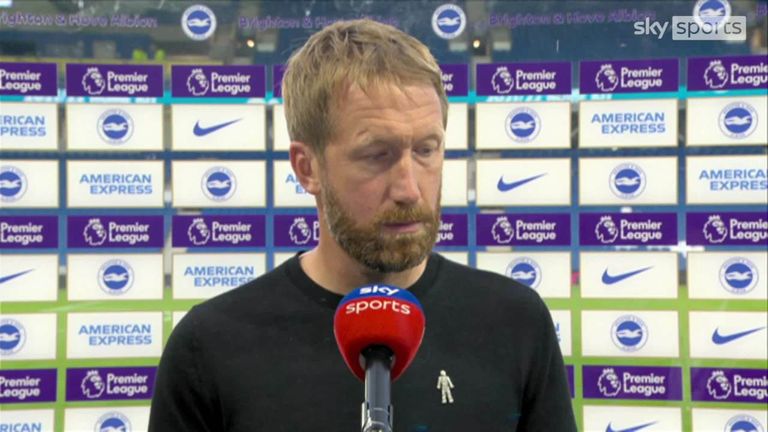 Graham Potter says his Brighton side can still improve, despite winning their first two games of the Premier League season.

Brighton boss Graham Potter: "We played well first half. It was a great goal from Shane [Duffy] and we controlled our attacks well and got the second goal from a recovery pressing action. We probably won the game in that half and had to defend well when the opposition responded. I'm really happy. It's not easy to keep a side with that attacking talent quiet.

"Duffy has done really well. He's been a breath of fresh of air. It's a credit to him. We want to try and help him enjoy his football. It's great.

"Maupay's injury isn't too bad. We're hopeful it's days and weeks. It's a little bit in his shoulder." 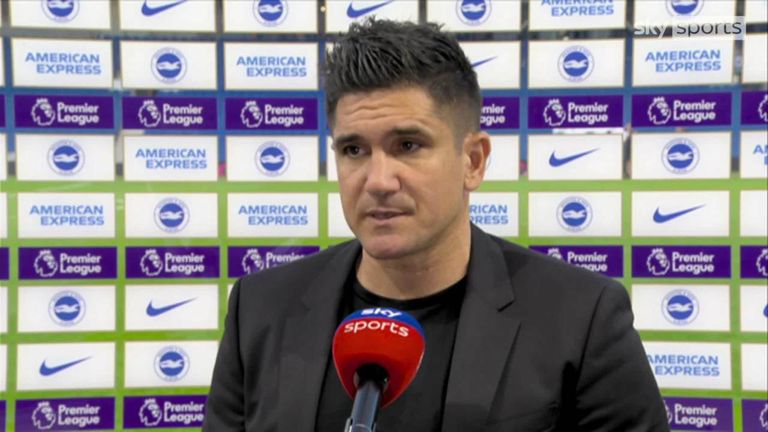 Xisco Munoz thinks that his Watford side improved in the second half, but that it wasn't enough to beat Brighton at the Amex

Watford boss Xisco Munoz said: "The first half wasn't a good performance. But the second half was the positive where we played with our style. But we need to learn quickly about the Premier League as sometimes you have to deal with problems.

"We've had a hard week but we must continue with the same attitude but if you make one mistake in the Premier League you have a big problem."

Brighton have a Carabao Cup clash with Cardiff on Tuesday night before hosting Everton next Saturday at the Amex back in the Premier League. Meanwhile, it's Crystal Palace for Watford in the cup in midweek before travelling to face Tottenham next Sunday.