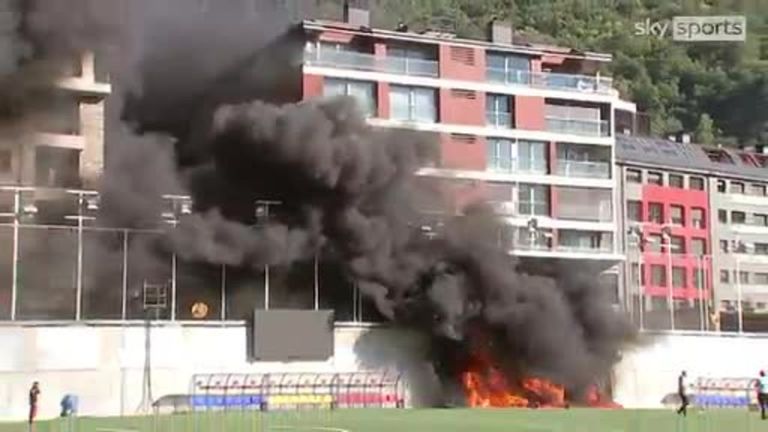 Watch the moment a fire breaks out during a live cross to reporter Rob Dorsett at the Estadi Nacional, where Andorra are set to play England in Saturday's World Cup Qualifier

A serious fire has broken out pitchside at Andorra's National Stadium a day before they take on England in a World Cup Qualifier.

The fire occurred during a live cross to Sky Sports News' England reporter Rob Dorsett and quickly engulfed the broadcast gantry in between the two sets of benches.

Thick plumes of black smoke billowed from the fire and covered some of the apartments which are metres away from that side of the ground.

A fire crew arrived on site a handful of minutes later to put out the flames but not before damage was inevitably done to the metal structure.

Despite the obvious damage, with the fire also affecting a small section of the field of play, Andorran officials have told Sky Sports News they are confident the game will go ahead as planned.

A spokesperson said: "No personal harm has been reported, only material damage. The schedule will continue as planned and the match will go ahead."

England's players had been training at the 3,300 capacity venue only three hours earlier, putting in the final preparation for Saturday night's clash.

After leaving the stadium, Rob Dorsett told Sky Sports News: "I saw some significant damage to the dugouts over there. The plastic structures where England would be based. In fairness, it looked like it was the home dugout that had melted partly because of the intensity of the flames.

"So to, we think, was the area where the VAR screen was due to be housed and most crucial of all, this is a 3G synthetic pitch.

"There was a very intense heat on that side of the stadium and I could see, as we left the stadium, that it had damaged the pitch. Only I would suggest a foot inside the touchline over there, but nevertheless damage to the pitch which will have to be assessed by officials before they decide whether it is safe and appropriate to play on that area.

"A lot of questions still at this stage about what happened, why it happened and indeed what will happen next with regards to tomorrow night's game.

"But perhaps the most important fact to report is that I understand no one was injured as a result of that fire. Nobody inside the stadium and nobody in the residential buildings above and behind it.

"Now it's just the practical damage and the implications for tomorrow's game which have to be addressed."