Report and highlights as Derby County beat Bournemouth 3-2 at Pride Park; Tom Lawrence's second-half double helps the Rams to victory to move onto zero points in the Championship; Bournemouth stay second, a point off Fulham 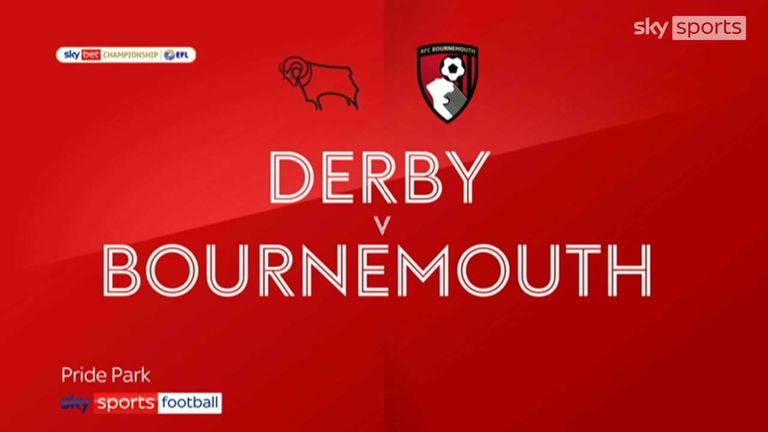 Highlights of the Sky Bet Championship clash between Derby and Bournemouth

The hosts took the lead through Jason Knight's 13th-minute header, only for Bournemouth to go in ahead at half-time after goals from Jaidon Anthony (19) and Dominic Solanke (38).

However, two goals in seven second-half minutes from Lawrence, the second from the penalty spot, gave Wayne Rooney's side a vital victory that saw them wipe out their 21-point deduction and move up to zero points in the table, while Bournemouth stay second, now just a point behind leaders Fulham.

The home faithful were in full voice after 13 minutes when Bournemouth conceded their first goal in eight league contests on the road.

Knight won a corner after his shot was deflected behind by Leif Davis and, when Max Bird swung the ball in from the right, the 20-year-old midfielder rose highest to find the net from six yards.

The Cherries' first attempt of the match came after 18 minutes when Solanke collected a Lewis Cook pass but lifted an edge-of-the-box effort over.

Within seconds, though, the visitors had drawn level courtesy of horrendous play after Derby lost possession in their own box as goalkeeper Kelle Roos looked to play out short from a goal kick.

Roos then saved Ryan Christie's shot with his outstretched right leg, but Anthony fired in from 10 yards after his initial effort had been kicked off the line by Curtis Davies.

Scott Parker's team subsequently went in front in the 38th minute when Solanke fired a 10-yard shot under the body of an advancing Roos after he had been slid in on goal by Jefferson Lerma.

The latter headed an easy chance wide before the break after Philip Billing had also won an aerial ball in the home box, while Derby went close in first-half stoppage time when Lawrence headed down a Festy Ebosele cross and Graeme Shinnie's half-volley whistled over.

Just past the hour-mark, however, the Rams were back on terms after Colin Kazim-Richards won possession in the away box and, when the ball broke to Lawrence 15 yards from goal, he curled a brilliant effort into Mark Travers' top-left corner.

Lawrence then had Pride Park in raptures on 69 minutes when, after Shinnie had been nudged over inches inside the box by Jack Stacey following a rampaging run through the left channel, the 27-year-old midfielder drilled the resulting penalty down the middle of the goal as Travers dived to his right.

Scintillating footwork by Lawrence subsequently led to a Kazim-Richards diving header that he steered wide of goal.

Spotting Travers off his line, Lawrence also attempted an audacious 40-yard lob that sailed just over.

But Billing should have still earned the visitors a point when he headed wide from a yard at the far post at the death.

The Cherries' faithful were left to reflect, however, on a ninth contest without a win against Derby, stretching back to a 1985 Baseball Ground clash.

Derby's Wayne Rooney: "We have to be realistic - it's a small chance but, for as long as there's an opportunity, we will be giving it a try. We're not just going to come into training for the sake of it and we will continue to fight on the pitch to get as many points as we can.

"There's a chance we can perform a miracle, which I feel it would be if we stay up. I have never doubted the players in terms of character, attitude and energy and, when we are on it, we can compete with any team in this league.

On skipper Lawrence's match-winning brace, Rooney added: "The first goal was a great one and, then, there's always a lot of pressure on penalty kicks, but his energy and work-rate all season has been great. He's really led by example this season as captain and you want your big players to make an impact on games." 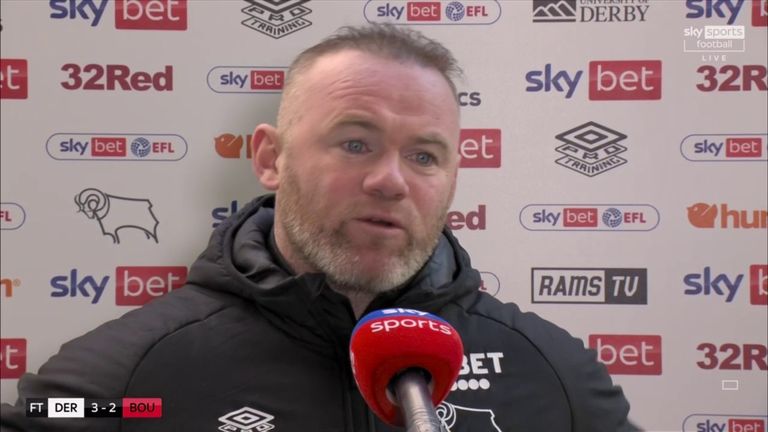 Bournemouth's Scott Parker: "We didn't play well enough to warrant three points. Having said that, at 2-1 up, even though we were not playing as well as we wanted to, we still felt we should have got a result even if it wouldn't have been the way we would have wanted to get one.

"We were off in all aspects of our game. Defensively, we weren't great but, after conceding an early goal from a set-play, we got back in front with two lovely goals and some good play.

"After that, though, we were not brave enough on the ball and made it a 50-50 game. That's not what we're accustomed to and the game turned into a basketball match.

"We did not control the ball well enough and, after the Derby crowd had gone quiet at 2-1, we gave them a bit of hope. Tom Lawrence then got them back into the game with a bit of brilliance and it became a difficult afternoon for us." 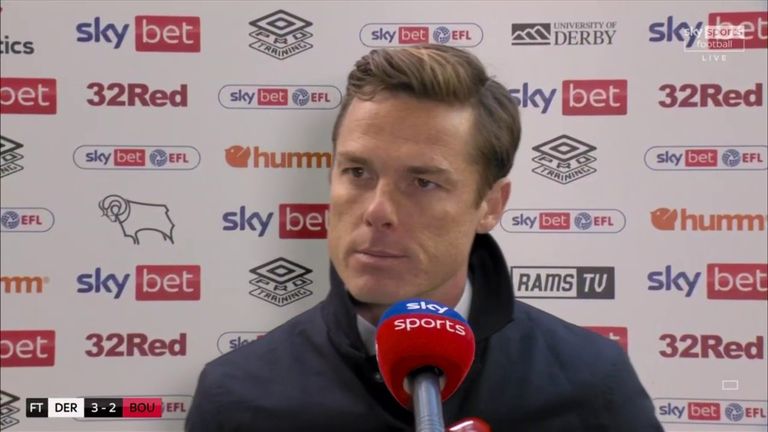 Man of the Match - Tom Lawrence

Lawrence led his team's stats when it came to goals, shots and shots on target at Pride Park after an effervescent display.

With the hosts trailing 2-1 and seemingly on course for yet another defeat, the Wales international turned the game on its head with two goals in just seven second-half minutes, the first an absolute beauty.

Picking up possession on the left side of the box, the forward cut back inside on to his favoured foot, before curling an unstoppable effort into the far corner in a moment of brilliance.

Minutes later, the 27-year-old kept his cool from the spot as Derby won for the first time in eight games and Wayne Rooney's men will need many more such eye-catching performances from their captain between now and the end of the season if they are to stand any chance of beating the drop.

Derby travel to Fulham, while Bournemouth visit Millwall, with both Championship games kicking off at 7.45pm on Wednesday on the red button on Sky Sports Football.