Celtic lost strikers Kyogo Furuhashi and Albian Ajeti to hamstring problems as they rounded off their Europa League campaign with a 3-2 victory over Real Betis.

The injury blow could leave Ange Postecoglou with no fit strikers ahead of a busy schedule which includes the Premier Sports Cup final against Hibernian a week on Sunday.

Celtic were already consigned to the Europa Conference League behind second-placed Betis, but a much-changed side secured a morale-boosting win at Parkhead.

How Celtic ended group with win, but not without concerns

With Celtic in the midst of a nine-game schedule in December, Postecoglou took the opportunity to rest players and give others game time by changing his entire team. Manuel Pellegrini made nine changes after Betis won in the Nou Camp on Saturday.

However, Postecoglou decided to bring Furuhashi on in the 28th minute when Ajeti pulled up after charging down the Betis goalkeeper's clearance. It was a decision that came back to bite Celtic when the Japan forward suffered hamstring pain after sliding in for a challenge.

With Giorgos Giakoumakis working his way back from minor knee surgery, Postecoglou could be without a recognised striker against Motherwell on Sunday, while key wingers Jota and James Forrest were also missing through injury.

Celtic got off to the perfect start when Welsh glanced Liel Abada's inswinging corner just inside the far post.

Betis were doing most of the attacking for the remainder of the first half. Urhoghide got back to make a crucial intervention after initial slack marking, before Scott Bain palmed a couple of shots away.

Betis then threatened several times from long range. The closest they came was when Paul Akouokou hit the bar in first-half stoppage-time.

Celtic were on the front foot more often immediately after the interval, although Bain pulled off a good save from Cristian Tello. Right-back Urhoghide put in some dangerous low crosses and Nir Bitton had a volley saved.

The visitors levelled in the 69th minute when some slackness from substitute Mikey Johnston gave Joaquin the chance to cross for Borja Iglesias. Bain got down well to touch the striker's shot onto the post and his luck was out as the ball ricocheted off his trailing leg and into the net.

Midfielder Henderson netted his first goal for Celtic in the 72nd minute, about 60 seconds after replacing Furuhashi, getting across his marker to bundle home from close range after excellent wing play from Johnston.

The latter blotted his copybook further when he conceded possession just before Iglesias was played through to net the Spaniards' second equaliser in the 75th minute.

Johnston was involved again moments later to set up Abada on the break before the winger was brought down right on the edge of the box. Turnbull sent the goalkeeper the wrong way after the spot-kick decision was upheld.

Celtic changed all XI of their players from the 3-0 win over Dundee United on Sunday.

Osaze Urhoghide and Liam Shaw made their debuts, Nir Bitton captained the side and Adam Montgomery played in a front three with Albian Ajeti and Liel Abada.

There were further injury fears for the hosts when Urhoghide and Bitton clashed heads, but both defenders continued.

Johnston's eventful cameo continued when he had a goal disallowed for an offside against Abada earlier in the move and squandered a glorious counter-attack chance during 10 minutes of stoppage-time, after Juanmi headed against the bar from three yards at the other end.

Postecoglou on Kyogo injury: It's not good

"We'll see. It's not good. We'll just wait and see what the assessment is. Obviously we'd have preferred to maybe give Kyogo a bit less time tonight, but with Albian [Ajeti] also getting a hamstring, we're just going through a bit of a rough time which never seems to end.

"We've had a few injuries, but the amount of games we play it's just ridiculous to be fair. We don't have the squad to cope with it at the moment. Luckily tonight we got some 90 mins into guys who could help us moving forward and be important." 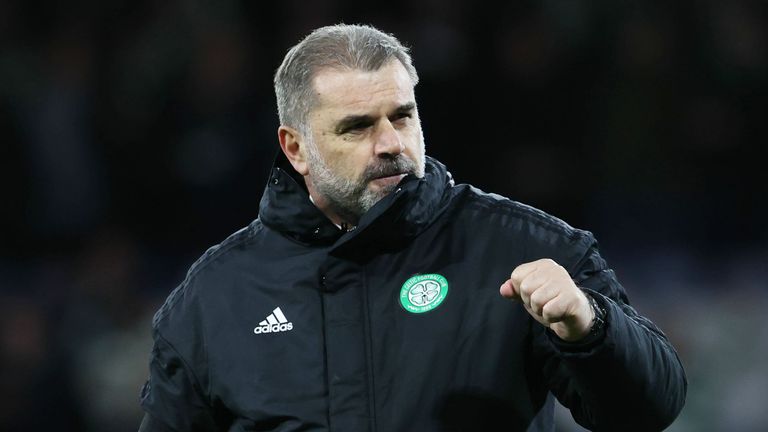 Celtic head coach Ange Postecoglou believes his side have made progress throughout the Europa League despite not making it through to the knockout stages.

Celtic host Motherwell in the Scottish Premiership at 3pm on Sunday, while Real Betis host Real Sociedad in La Liga at 5.30pm on the same day.