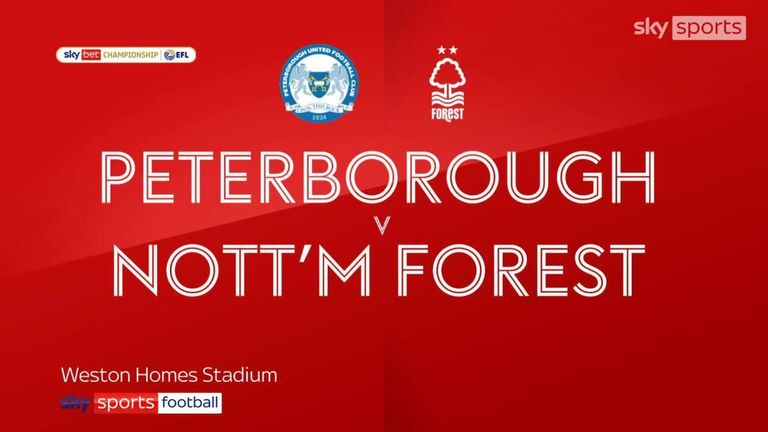 Highlights of the Championship match between Peterborough and Nottingham Forest.

Peterborough's relegation to League One was confirmed as Sam Surridge scored the only goal in a 1-0 Championship defeat at the hands of a Nottingham Forest side bidding to leave the second tier in a different direction.

This was one of those surreal footballing occasions where Posh could be relegated with a win and Forest able to seal a play-off spot even if beaten.

As it turned out, neither of those scenarios became reality with Forest taking victory to all-but secure their spot in the top six and the hosts' inevitable drop back into League One coming on a losing note despite a late rally under current boss Grant McCann in a season when the damage was already done.

Forest frontman Surridge provided the only goal on the stroke of half-time when heading in his fifth goal of the season to leave Steve Cooper's men almost certain of a play-off spot as they continue to dream of Premier League football for the first time this century.

There was considerably more at stake for Posh, though, on the day and they were the more threatening team early on.

Josh Knight saw a shot blocked by Djed Spence after a marauding run forward from the full-back before Brice Samba was called upon seconds later to ensure Forest did not fall behind.

The visiting goalkeeper dashed from his line to deny Ricky-Jade Jones after the Peterborough youngster collected a Harrison Burrows pass and turned a defender.

Forest showed signs of coming to life around the half-hour mark as Philip Zinckernagel provided a first test for Posh goalkeeper Dai Cornell with a shot from a tight angle - and the former was heavily involved when the only goal arrived in the 45th minute.

Zinckernagel stole the ball from Peterborough's Knight and exchanged passes with Brennan Johnson during a lethal counter-attack that ended with the latter crossing from the left for Surridge to head back across goal into the corner of the net.

Posh responded by introducing striker Jack Marriott for the second half, but it was Forest firmly in the ascendancy.

Creditably, Posh continued to search for a route back into the game, but it was with no success as Samba beat away shots from Sammie Szmodics and Burrows.

Forest substitute Lewis Grabban saw a late strike disallowed for offside before scuffing another glorious chance moments later before the replacement had to be substituted himself due to an injury.

But one goal proved enough to keep their promotion dreams on track, while Posh must plan for life in League One after just one campaign in the second tier.

Peterborough's Grant McCann: "It's a sad day for everyone connected to the football club. People work tirelessly behind the scenes and fans pay their hard-earned money every single week, home and away, but we just haven't been able to deliver. I can't thank the players enough for the attitude, effort and determination they have put into the 12 games since I've been here.

"A lot of the players won't have been in this position before and felt this sort of pain, but they have to feel it and use it to their advantage to ensure the comeback is stronger than the failure. We all want to be a sustainable Championship club, but now we have to focus on getting back into this league. I've had this experience before at Hull not so long ago. We dusted ourselves down to bounce straight back and hopefully we can do that here too. People think League One is easy. It's not. It's a really tough league full of massive clubs, but I think we can have a really successful season."

Nottingham Forest's Steve Cooper: "We weren't at our purest by any means, but we showed enough quality to get the job done. We stood up to everything Peterborough threw at us really well, we stuck to our way of playing and scored a brilliant goal. We had somewhere around 3,700 fans here and it sounded like 37,000 at times with the noise they make. They played a massive part in getting us over the line. Fair play to Peterborough...they have some good young players and really put up a good fight today. We'll be happy to get back on the bus with the win.

"I've got a lot of respect for Grant and he knows that as we spoke even before he came here. We still have work to do and need to get down to Fulham for the next game in the best shape possible. They're the best team in the league and deserve to be promoted, but we want to play against the best to see where we're at."