Rangers win the Scottish Cup for the first time since 2009; Ryan Jack and Scott Wright scored in extra-time to secure the victory over Hearts; it ends the week on a high after their Europa League final misery in Seville

Rangers recovered from their Europa League disappointment to beat Hearts 2-0 after extra-time to win the Scottish Cup for the first time since 2009.

The Ibrox side wanted to end the season on a high after falling at the final hurdle in the Europa League while Hearts were looking to add the trophy to their impressive third place finish in the Scottish Premiership.

Rangers had the majority of the chances and Craig Gordon pulled off a wonder save to deny Joe Aribo before Scott Wright hit the bar as the match headed into extra-time.

Ryan Jack fired the Ibrox men ahead before Wright slotted home to etch their name on the Scottish Cup trophy again after a 13-year wait.

Giovanni van Bronckhorst made five changes from their Europa League final defeat as Rangers prepared for their last chance of silverware this season.

John Souttar returned to the Hearts line-up for his final match before his move to the Ibrox club.

It was a frantic start and Peter Haring went into referee Willie Collum's book after just three minutes for a poor challenge on Rangers defender Calvin Bassey.

Hearts came agonisingly close to the opener when Liam Boyce picked out Ellis Simms at the back post. The on-loan Everton man lunged for the ball but could not get enough behind his shot and hit the post.

Rangers then enjoyed a spell of pressure but could not find a way through an organised Hearts defence, with Scott Arfield's effort blocked in the box.

Amad Diallo, who scored against Hearts in the Scottish Premiership a week ago, was met by a terrific ball from Bassey but the winger headed high over the bar from six-yards out.

It was goalless at the break.

Bassey impressed for Rangers in their Europa League final defeat and he showed his skill again at the start of the second half.

He skipped away from three Hearts defenders before a wonderful turn to send in a cross which was then blocked by Souttar.

Ryan Kent then raced onto a long-ball as Rangers pressed but Hearts keeper Gordon was quick off his line to deny the winger.

The Ibrox side continued to pile on the pressure as Souttar cleared an effort from Wright and Gordon denied Bassey.

Leon Balogun then headed just over the bar from James Tavernier's corner after Kent's effort was cleared by Souttar.

Gordon then did what Gordon does to send the match into extra-time.

It looked all but certain that Aribo's ball was hitting the net but the 39-year-old stopper stretched out a boot to send the ball past the post.

Wright then headed onto the woodwork from Tavernier's ball as Rangers faced extra-time again.

And this time it breathed new life into the team.

Jack fired in off the crossbar to give them the lead and the blue end of Hampden erupted.

Wright then added a second soon after - the substitute collected the ball from Kent, burst into the box and fired low past Gordon.

The Hearts keeper then dived to deny Steven Davis but it was too little too late and Rangers' name was on the Scottish Cup trophy once again.

There was then once last headline to write as veteran goalkeeper Allan McGregor came on for the final minutes, all but confirming his second spell at Rangers is at an end.

Gio: This win gives us energy 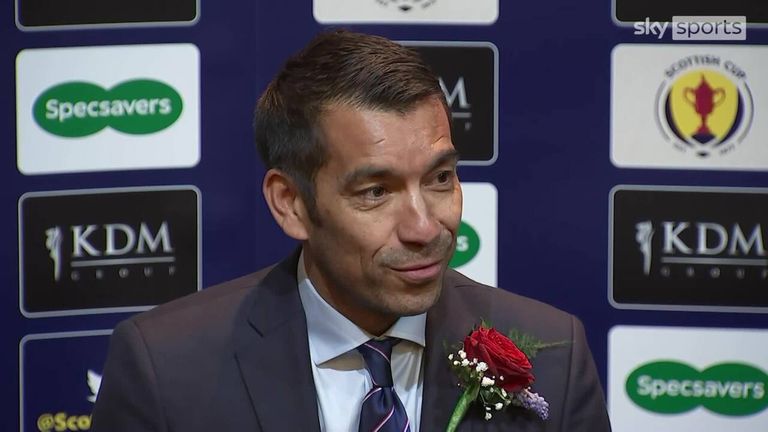 Rangers manager Giovanni van Bronckhorst says it is positive for his side to end the season with a trophy, following their Scottish Cup victory

Rangers boss Giovanni van Bronckhorst said: "It means a lot. I told the players before the game, we haven't won anything yet. We came so far in Europe and in the cup, but in the end you have to work hard and today we did.

"Very important, it's always good to end the season with a trophy. It's a positive and we worked really hard and looked stronger in extra-time and we deserved the win today.

"I'm very impressed and proud of them because it's been a big week with the final and the farewell of Jimmy (Bell, club's former kitman) and today we had to be there. We had pressure to get the trophy and in the end we did.

"It gives us a lot of energy, next season is new and I can start from day one. We have to keep working and you will see in the transfer window what happens, but we will see changes.

"It depends, they are out of contract which is a luxury for players but they want stability and once they have made their minds up where the future will lie, we will tell you. But I'm happy with the players that are out of contract. We will enjoy this time and have a big party tonight and holidays tomorrow." 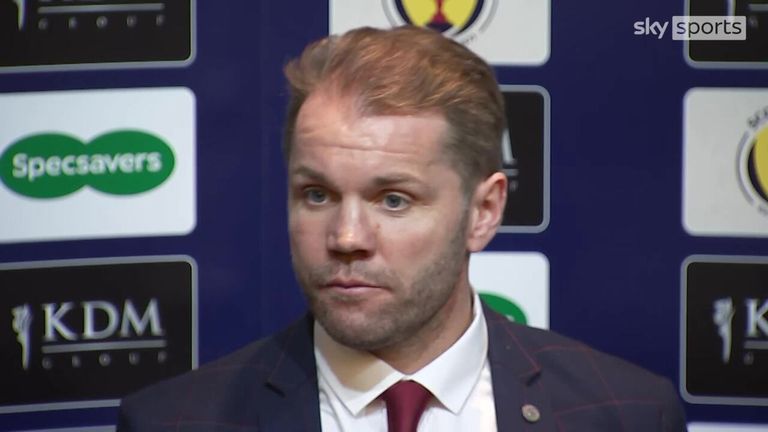 Hearts manager Robbie Neilson admits the defeat to Rangers is hard to take, but the team should be proud of their performance this season

Hearts boss Robbie Neilson said: "We're disappointed not to win it. I'm proud of the players' performance today. The first 90 minutes, we were outstanding. Rangers are a very good team - they were in the Europa League final. We had to negate them, but we had some very good chances.

"The changes Rangers could make, they brought in international players worth £5-£10m - we can't match that. But we want players who can do that.

"Any chances you can get and you don't get in, there's going to be reflection. I can't fault the players and the fanbase came through with 22,000 here today. We just couldn't take that final step.

"People talk about their exploits on Wednesday night, but five or six of them weren't involved. I don't think that has any reflection on the game at all. It was the quality of the bench, the subs that came on changed the game. The two subs scored the two goals."