Darwin Nunez made his first Liverpool start and hit the crossbar in the first half; Premier League-linked Benjamin Sesko scored before the half-time break on the counter-attack; Liverpool now turn their attention to Saturday's Community Shield with Manchester City 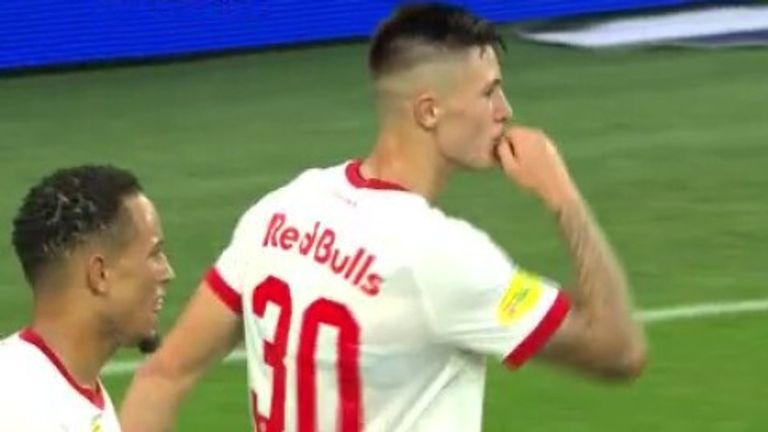 Darwin Nunez made his first Liverpool start but could not prevent his side from losing for the second time this pre-season as they lost 1-0 to Austrian side Red Bull Salzburg.

In Liverpool's last pre-season friendly before Saturday's Community Shield against Manchester City, Jurgen Klopp put out a second-string side in Austria but started marquee signing Nunez fresh off his four goals against RB Leipzig last week.

The Uruguay forward struck the crossbar in a frustrating first half for the Reds, which saw them fall behind on the counter-attack courtesy of another familiar name in the transfer window.

Benjamin Sesko, linked to Manchester United and Newcastle in the UK media, swept past Adrian on the half-hour mark after superbly bursting past Ibrahima Konate to start the attack off.

Nunez was taken off at half-time and Liverpool had a near-full strength side on 60 minutes and created far more chances.

The best fell to Luis Diaz just minutes after coming on, with the Colombia international playing a one-two with Jordan Henderson before forcing Salzburg goalkeeper Nico Mantl into a good save.

Roberto Firmino and Mohamed Salah forced Mantl into a good save, before Diaz had a run and finish disallowed for offside.

Trent Alexander-Arnold, Jordan Henderson and Andy Robertson all had late efforts but the Austrian side held on for the victory.

Klopp lamented the way his Liverpool side started Wednesday night's friendly and called on his players to get close to record signing Nunez in order to be more threatening up front.

"First half, we made too many mistakes which they could use," Klopp said after the game. "We had good moments in the game as well, we could have scored four, five goals at least. We didn't do that.

"Darwin was alone too much, everybody dropped off and everyone was then too wide and Darwin was alone in the box. He had his chances but he needs more support around him to keep other players busy so they don't focus on him. It doesn't feel great but we take it and go from here."

Klopp admitted the match did not feel like a friendly due to the emotion Salzburg put in the game - and while some of the Austrian side's challenges were too harsh at times, he had full respect for the opposition.

"In the first half, we were too open, too wide and weren't connected enough. When we lost the ball, it was like a motorway with their speed - especially when you lose simple passes where nobody can react.

"The last half an hour was like a thunderstorm. We were like a truck but we didn't finish them off. It will be fine. We had to make a lot of changes but I take that.

"It didn't feel like a friendly, for Salzburg and us as well. Salzburg had these rough challenges but they did really well. All respect to them, sometimes I didn't like their challenges but nothing happened there I think."

Analysis: Which starting XI spots are up for grabs at Liverpool?

Klopp told Sky Sports News this week there will be no more transfer incomings this summer, barring any bizarre circumstances.

If this friendly in Austria is anything to go by, then the Liverpool manager, who had a full-strength side barring Alisson Becker and Kostas Tsimikas, has a clear first-choice XI and a second string to choose from going into the start of the season.

Liverpool had more of a zip after the hour mark when the big guns, who may have been saved for Saturday's Community Shield clash with Manchester City, came on to try and find a way back in this game.

So if there is a difference in quality between the two line-ups Klopp fielded against Salzburg, then where is the competition for places in this Liverpool team, with just over a week to go with the opening curtain at Fulham?

Well, the first is obvious. Darwin Nunez was by far and away Liverpool's best player in the first half among the second-string players. The Uruguay international used his strength well to bring others into play, and pointed towards misfortune via the crossbar and some last-ditch Salzburg defending as to why he couldn't add to his four goals in Leipzig last week.

It looks like Nunez and Firmino will compete with Diogo Jota for that striker berth, as Mohamed Salah and Luis Diaz occupy the wings. But no one can really tell due to the fluidity of Liverpool's attacking options.

At the back, Ibrahima Konate was another bright spark and showed astute defending at times, but did look a little bullied for Benjamin Sesko's goal. Him versus Joel Matip in the battle to be Virgil van Dijk's strike partner will be an interesting tussle.

Liverpool's midfield three of Fabinho, Thiago and Jordan Henderson looks settled with Naby Keita doing little to impress in Austria - but Harvey Elliott stands a chance of starting against Fulham next week. The 19-year-old started on the wing once again but came inside and may take up his midfield role.

Liverpool fans should not look too much into this pre-season friendly given the fact Salzburg have already started their league season so are ahead in their pre-season and fitness schedule. But the performance of defender Isaac Mabaya will please them, with the 17-year-old getting forward well from right-back.

Liverpool have the Community Shield with Manchester City on Saturday before taking on Ligue 1 side RC Strasbourg on Sunday at Anfield.

Expect most of the Liverpool squad to be used by then, before Jurgen Klopp's side open their Premier League season away to Fulham on August 6.