Beth Mead has been voted the 2021/22 England Women’s Player of the Year; the Arsenal forward enjoyed a spectacular goalscoring year, finding the net 20 times in 19 matches; she also broke Jimmy Greaves’ longstanding record for the most goals in one season for England

Arsenal's Beth Mead has been named as England Women's Player of the Year for 2021/22.

The forward was selected by fans in a social vote as the stand-out player in a historic 12 months for the Lionesses, ahead of Leah Williamson and Keira Walsh in second and third respectively.

Mead, who took home the Golden Boot as well as a winner's medal at Euro 2022, was awarded European Player of the Tournament by UEFA, while her many exploits have also led to a Ballon d'Or Féminin nomination.

"I'm super proud to play for my country and be named player of the year, but I couldn't have done it without my team-mates and staff and everyone behind me," she said ahead of England's game with the USA on Friday night.

"It's theirs just as much as mine, but I'm proud of the season I had individually and collectively for my club and country."

The 27-year-old is the only English player to win the Golden Boot and player of the tournament at a senior Euros. She also now holds the record for most goals scored for England in a single season (14), surpassing Jimmy Greaves' record (13).

Mead's victory makes it a double celebration for Arsenal with Bukayo Saka recently announced as the England Men's Player of the Year.

The Lionesses face the USA at a sold-out Wembley Stadium on October 7, returning for the first time to the ground where they lifted the European trophy in late July.

"There is little debate about who the breakout star of 2021/22 is. 'Beth Mead's on fire' was Euro 2022's anthem. Her numbers are quite astronomical. She had long been considered a special talent, particularly by those who watch her week-in-week-out at club level, but this summer she proved why it was a mistake to have ever overlooked or questioned her immense ability.

"It almost mocked the decision to leave her out of previous England squads. She's gone from playing on the fringes, outcast from Team GB to being the focal point of a supremely-talented Lionesses team. Her make-up is unique. 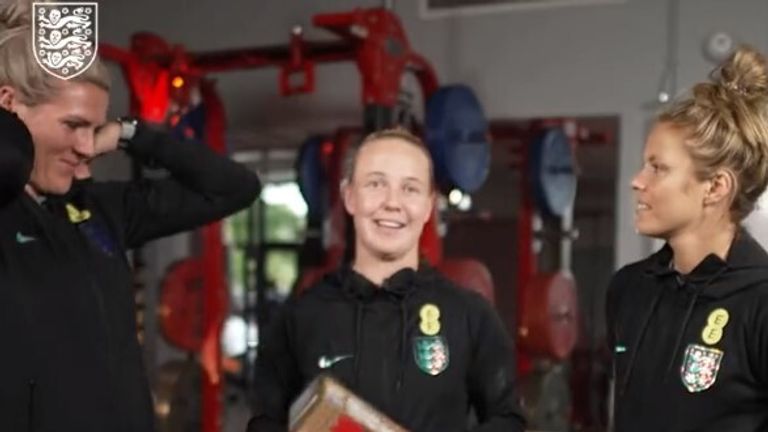 Millie Bright and Rachel Daly surprised their England teammate Beth Mead with the England Women’s Player of the Year award.

"She can play on either wing, is blessed with pace and skill, as well as a devastating eye for goal. But perhaps what makes her even more formidable is her willingness to view adversity as a challenge. Her knock-backs have not defined her, they've driven her. "It lit a fire under me," she said when responding to a question about being left out of the Tokyo Olympics squad in 2020.

"She's blossomed into a wonderful footballer under the management of Jonas Eidevall at Arsenal, and Sarina Weigman at international level, both of whom she credits as being part of her journey of growth over the past year. The most credit, however, should be attributed to her innate desire and hunger to prove doubters wrong. She's let football do the talking.

"Sport is littered with comeback stories - but hers is certainly one to treasure."

Analysis: Mead has nothing left to prove

"Beth Mead is England's Player of the Year, Euros Golden Boot Winner and Player of the Tournament but one of the biggest victories for the Arsenal player is how she's now seen as one of the world's best.

"After being left out of Team GB's squad for the Olympics, the narrative around Mead was constantly about proving herself and "playing angry" after the omission.

"When we talk about world class forwards we often get caught in a whirlwind of stats, just like we are with Erling Haaland right now.

"Mead's numbers for England since the start of last season are, quite frankly, ridiculous. Six goals and four assists during the Euros, 13 goals and 12 assists during ten World Cup qualifiers. The only thing Mead has to prove is how high she sits on a list of the world's best forwards."