Former Barcelona captain Carles Puyol responded to Casillas' now-deleted tweet, posting: "It's time to tell them about us"; Puyol has since apologised for the tweet, saying it was a "clumsy joke"

The former Real Madrid and Spain goalkeeper posted the update to his 10 million followers on Sunday afternoon.

'Hacked account,' Casillas posted. 'Luckily everything in order. Apologies to all my followers. And of course, more apologies to the LGBT community.'

Around 30 minutes earlier, the original post - which read 'I hope you respect me, I'm gay' - had been deleted from the account.

Translated, it read: "It's time to tell them about us".

Puyol later tweeted an apology, which read: "I was mistaken. Sorry for a clumsy joke without any bad intentions but absolutely out of place. I understand that it could have hurt feelings. All my respect and support for the LGBTQ+ community."

A Stonewall Spokesperson said: "It is disappointing to see homophobic 'jokes' being made at the expense of LGBTQ+ players and fans. Whatever their intent, our words matter. At Stonewall, we'll continue to fight for a better world where LGBTQ+ people can play the sports we love as ourselves."

Sky Sports News has contacted Twitter to ask if they are, or have been, investigating a hack of Casillas' account.

Casillas is considered a legend of Spanish football after being capped 167 for his country and making over 700 appearances for Real Madrid.

In May, Blackpool's Jake Daniels became the UK's first male professional footballer to come out publicly as gay since Justin Fashanu in 1990.

"Iker Casillas and Carles Puyol joking and making fun out of coming out in football is disappointing," Cavallo said on Twitter.

"It's a difficult journey that any LGBTQ+ ppl have to go through. To see my role models and legends of the game make fun out of coming out and my community is beyond disrespectful." 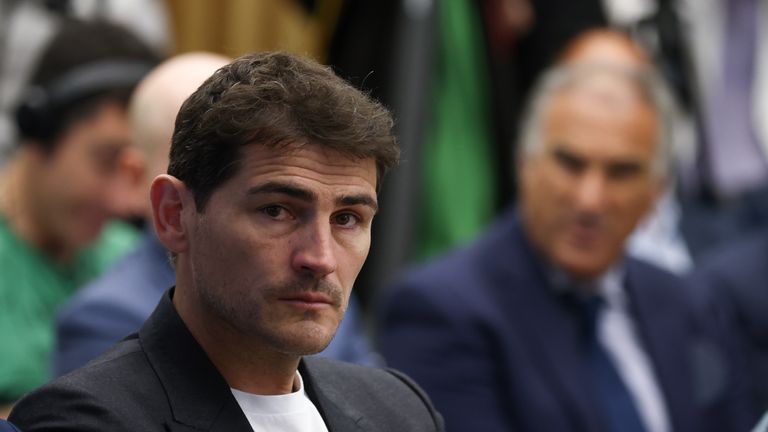 Sky Sports News reporter Mark McAdam reacts to Iker Casillas' tweet announcing he was gay, which was published from his personal Twitter account. Casillas says the tweet was the result of a hack and has apologised to the LGBTQ+ community

"One tweet, six words, 32 characters and so much damage has been done, with all the good work going on behind the scenes.

"If you look at the last 12 months, we saw Josh Cavallo come out in Australia, we have seen young Jake Daniels come out in the EFL, and then most recently Zander Murray in Scotland, which shows football is progressing.

"There is some brilliant work going on and change is genuinely being made, but when a tweet like this comes out and you've got two of the most high-profile Spanish footballers almost mocking gay people where, at the moment, it is illegal to be gay in 69 countries, young children are committing suicide because of their sexuality and there are people who are being murdered because of their sexuality, this is not a laughing matter.

"This is not a joke and it is not a source of comedy and entertainment for these footballers, regardless of the hacking situation.

"This is really serious, and it has set things back, but what you have seen from the three players I mentioned (Cavallo, Daniels, Murray) is that there is a place for LGBTQ + people in football and progress is really being made.

"This could have been one of those moments that completely changed football for the better where someone decided to say 'look, I'm gay and I'm happy to talk about it and I'm happy to put it out there'.

"But obviously it wasn't that moment because every time someone comes out, every time you've got people talking about this stuff it makes young LGBTQ +people around the world feel a little bit safer, a little bit more accepted in themselves.

"They look up to their idols and say 'if they can be gay and be a footballer then it makes me accept myself that little bit more' and that's the key for all the campaigns that happen.

"It's about showing football is an inclusive place, that progress is being made, and that you can be yourself and still enjoy football and sport as much as anyone else.

"This is why these situations are so damaging. We've seen the progress that has been made and that's the most important thing despite this tweet."