Roy Keane on Marcus Rashford's form after the Manchester United striker scores again in a 3-0 Carabao Cup semi-final first-leg defeat of Nottingham Forest: "He looks like a lean, fighting machine" 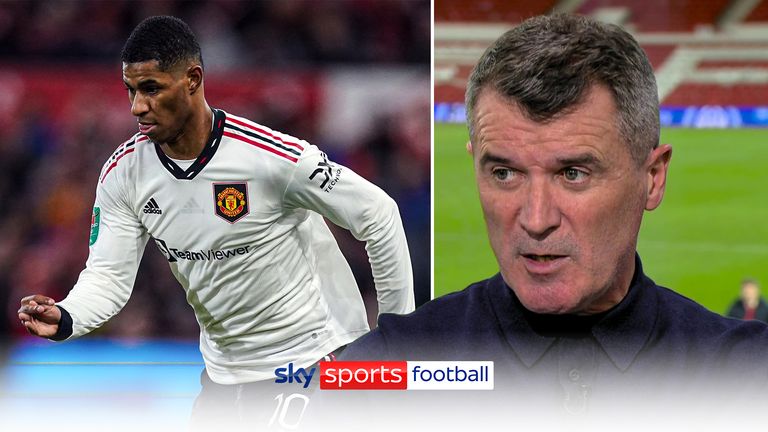 Marcus Rashford looks like a "lean, fighting machine" according to Roy Keane, who praised the striker for taking responsibility after a 10th goal in 10 games.

Manchester United took total control of their Carabao Cup semi-final against Nottingham Forest with a 3-0 win in the first leg at the City Ground, Rashford opening the scoring with a fine solo run which spoke volumes for the England forward's current confidence.

Keane said: "We were pitchside when the players came out and he looked lean. You wouldn't want to be up against him - all the best.

"Sometimes it's about confidence - there is where he's peaking now. He's played a lot of games for United and big games for England in the last few years.

"Sometimes the penny drops for a player in terms of decision-making and putting the ball in the back of the net. And they've needed him.

"The question mark I've had over Marcus in the last few years is, has he got that personality to step up to the plate?

"United have had some great strikers over the years, and I think they need someone like that. Marcus has to say he wants that responsibility to be the main man. The best players turn up week in and week out. It looks like he's now enjoying that responsibility, which is great to see."

When asked if Cristiano Ronaldo leaving the club has helped Rashford's confidence, Keane replied: "When a player leaves the club the responsibility goes onto another player.

"He's 25, not a child, sometimes when the timing is right you can be ready for that. He doesn't get the niggly injuries anymore with his groin, he seems to have cleared it up. He looks in a great place mentally, too, which is huge. He said he reckons he took too much on away from football - and being a top footballer is hard enough.

"So putting the other stuff on the back burner and focusing on being a top player for Manchester United has seen him get his priorities right."

Michael Dawson added to Sky Sports: "His best position is out wide on the left, but since Erik ten Hag has come in he has made a point of getting him back to his best levels.

"He was disappointing last year and struggled with form. What I see now is a completely different player, without fear and full of confidence. He doesn't play safe and is direct with the ball at his feet.

"If he loses it, he has the aura where it doesn't seem to faze him."

Ten Hag: In this mood, Rashford is unstoppable

Erik ten Hag says he is happy with Manchester United's performance in their 3-0 win against Nottingham Forest, but insists they still have room for improvement before the second leg

Rashford's return to his best this season has coincided with the appointment of Erik ten Hag, who could be leading United to their first trophy for five seasons in his first year in the job.

When asked if anyone in the country is playing better than Rashford, Ten Hag said: "Other players are playing well but I am happy with Marcus. His performance and his development since the start of the season is growing and he keeps doing that. We have to, and, of course, he is responsible for that too, keep that process going.

"In this mood and this spirit, I think he is unstoppable. Then it is about the team getting in the right positions.

"In possession we have a plan. But it is also about intuition and the creativity of the individuals like Rashford to create chances.

"When you have players like Rashford, like Bruno, like Antony, like [Anthony] Martial, and like Christian Eriksen, don't forget him, [who can] be creative in the final third and do something unexpected, some crazy stuff, it also gives the team some fantasy and adventure."

The United boss told Sky Sports: "We have many games, Marcus did his game, did his job, scored another goal, we were winning, in a good position and Garnacho is really hungry to play games, play minutes and also to come into the team.

"Yeah, we have to play one (more) game. We have to do the same, prepare and make a good plan. The players have to be focused."