With Arsenal and Chelsea gearing up to meet in this weekend's FA Cup final, we look back on both clubs' runs to Wembley.

For much for the first half at Deepdale, Arsenal's involvement in the FA Cup looked as though it might falter at the first hurdle. Callum Robinson had put the Championship side ahead after just seven minutes and was a hair's breadth away from doubling the lead before the break.

Following various spurned chances, Preston were punished after the restart; Aaron Ramsey equalised inside 50 seconds, and Olivier Giroud struck in the 89th minute to quell Gunners' fans fears of an upset.

What Wenger said: "We are at the top level in the Premier League and we were dominated. Preston had chances and we were just not at the pace the game demanded. Preston were organised and were quick in the transition. We were in trouble every time. They played in a very intelligent way. They are a good side, I was really impressed."

Both managers made 10 changes to their starting line-ups, but much to Arsene Wenger's delight, his rotated side romped to victory in style at St Mary's.

In just his fourth game after returning from his perilous spell of knee trouble, Danny Welbeck netted a seven-minute brace, before Theo Walcott made it 3-0 10 minutes before the break. Former Saints youngster Walcott helped himself to two more to register his fifth hat-trick for the club and book a fifth-round berth.

What Wenger said: "Theo is a good finisher and the chances we created were very good. He's very quick, he has a short backlift and is very accurate in finishing."

It wasn't quite the whitewash that had been expected at Gander Green Lane, but Wenger's men rode their luck to beat their National League opponents. Sutton more than held their own, but were behind after 27 minutes when Lucas Perez slotted past Ross Worner.

Walcott popped up again 10 minutes after the break to score his 100th Arsenal goal and seal the victory under the floodlights. 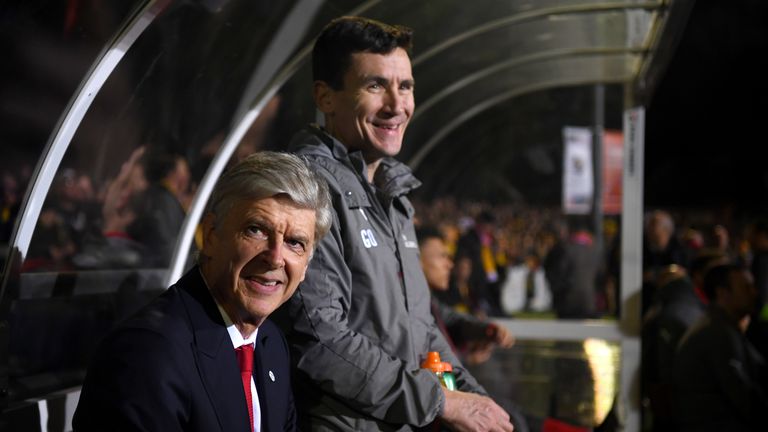 They are basically in division five and they are 17th out of 24. [I was surprised] by the speed of their game.

What Wenger said: "The fact they never stopped going until the end and, compared to 20 years ago, these teams are fit now and can play at the pace of the Premier League."

Arsenal faced another National League side in their first FA Cup home draw this season, this time in the shape of Lincoln City. The Imps had become the first non-league side to reach this stage of the competition since 1914 but their fairy-tale came to its inevitable conclusion at the Emirates.

In spite of the 0-0 scoreline at half-time, the north-Londoners hit back with goals from Walcott, Giroud, Ramsey, Alexis Sanchez and a Luke Waterfall own goal.

What Wenger said: "I think the team was unjustifiably criticised for our last game against Bayern Munich because we had an outstanding game. And overall, to respond today, that's what we did."

In comparison to their semi-final clash, Arsenal's path there had been a stroll in the park. The two sides each had a first-half goal ruled out, before Sergio Aguero gave City the upper hand just after the hour mark.

Extra-time was earned through an equaliser from an unlikely source in Nacho Monreal, before star man Sanchez swept home Mesut Ozil's free-kick to send the Gunners to a record 20th FA Cup final and a third in four seasons.

What Wenger said: "The club is in a very strong state. When you watch the stands, and see how big this club is, I'm just happy our fans can go home happy. We have gone through a very difficult period. We have shown a united response."

Unlike their London counterparts, Chelsea's FA Cup campaign began comprehensively, mirroring their performance in the league. They welcomed Peterborough to Stamford Bridge with open arms, but ruthlessly dispatched the Posh with two goals in each half.

Pedro opened the scoring inside 20 minutes and Michy Batshuayi doubled the lead before the break. Willian added a third before skipper John Terry was dismissed and Pedro notched his second 15 minutes from time as the Blues sauntered into round four. Tom Nichols' struck 20 minutes from time to prevent a whitewash.

What Conte said: "I think we faced a good team, but today we showed big commitment and we showed how to be a team. We won as a team and this is the most important thing because when you change nine players, it is not easy to find your ideal football quickly."

Next up for Antonio Conte's men was a west London derby with Brentford, whom they had turned over 4-0 in a fourth-round replay back in 2013. Despite Chelsea's changes, the Championship side offered little to trouble their mighty neighbours, who were two to the good at the break with Willian and Pedro on target once again.

Chelsea would have been completely out of sight by half-time but for an inspired display between the posts by the increasingly busy Daniel Bentley, but Branislav Ivanovic and Batshuayi struck further goals to put the icing on the cake.

Perhaps Chelsea's first test in the competition came as they travelled to Molineux to face another Championship opponent. Terry made his first appearance since the Brentford victory in round four but his return could have been marred by defeat when former Blues youngster George Saville smashed a shot onto the post inside five minutes.

The Blues were forced to defend for large periods, however Pedro and Diego Costa struck in the second half to avert the real possibility of an upset.

What Conte said: "We were very good to suffer in the first half. Wolverhampton started the game very well with great intensity. They hit the post after five minutes and we were lucky. In the second half we played our football, we played very well. We scored two goals. Wolverhampton deserve my compliments for the performance."

Jose Mourinho returned to Stamford Bridge in the quarter-finals hoping to get one over on his former side and upset Conte's bid for a double in his debut season in England. David De Gea had to be in inspired form to keep out numerous Blues opportunities, but United's hopes were dealt a blow when Ander Herrera was dismissed for a second bookable offence after 35 minutes.

Though Marcus Rashford was inches away from netting a superb solo effort as the second half continued, N'Golo Kante's low drive six minutes after the break proved to be the difference; Chelsea narrowly through.

What Conte said: "It was a good performance against a strong team with good players. United has the best squad in the league. For us we must be pleased to go into the next round."

Standing in the way of a spot in the final was a true titanic clash with Tottenham. The top two in the Premier League went head to head as they had already done in the league and produced one of the most memorable semi-finals at the new Wembley to date.

Willian's set-piece brace and Harry Kane's header made it 2-1 at the break, but though a stunner from Dele Alli dragged Spurs back into the tie, Eden Hazard grabbed a third 15 minutes from time and Nemanja Matic silenced the north London contingent with an unstoppable drive, forcing a rerun of the 2002 showpiece.

What Conte said: "For sure this win is a really important win. They are fighting us for the title. We deserve this victory against a really strong team. I think to see this type of game England must be proud - proud to have this intense football, with this level of players. It was a great thing."